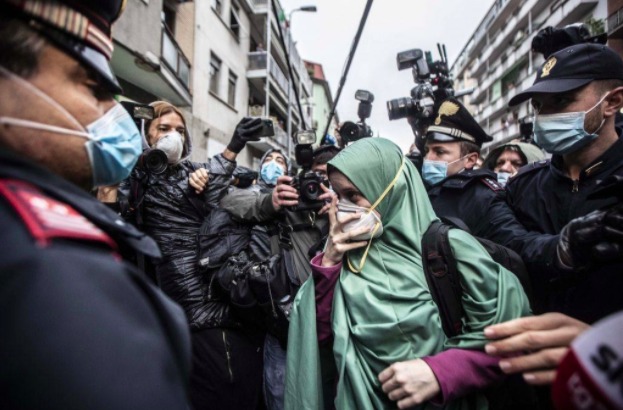 Yes, Pope Francis is in a storm and torn to pieces by his own household, his own ‘Faithful’, his own countrymen, nay those in his own “back yard” Rome. It only confirms the biblical truth, “your enimies are of your own household!” We throw stones only at fruit-bearing Trees!

It is also the sign of the times we live in: of ‘fake news, post truth, half truth and double talk’, plain lies or ‘doublethink’, coined by author George Orwell or recently of retired judge Markandey Katju, a former judge of the Supreme Court of India.

Reecently Katju wrote in his face book; “Dark days are ahead for India’…Constitution declares India to be a secular country, the ground reality is very different….As is evident from the 2019 election, the real issues facing India — such as poverty, unemployment, malnourishment, lack of healthcare and good education — were non-issues for the voters. All that mattered for 90 per cent of them was religion and caste of the candidates.”

“Most politicians are liars, and not just Modi. They promise the moon at the time of elections. Indira Gandhi had said ‘Garibi hatao’, and our gullible masses swallowed this slogan lock, stock and barrel. So why blame Modi alone? Most Hindus, who constitute 80 per cent of India’s population, will keep voting for the BJP. Modi’s lies are irrelevant.”

With due modifications this can be said and applied to all Christians, especially to Cattholics and their clergy and bishops in particular. But Francis is not one to be swayed by praise or blame comment or both. “Bene currit, sed extra viam” Runs well but outside the track can only fit well with New York Cardinal Dolan, praising Trump.

But not so with Francis. He runs right within two tracks: “a poor church for the poor” marginalized and on the periphery, right from the moment he was elected Pope. His two track lines are: “His equality and fraternity with all, on one side and service to all born of man and woman, secular, religious, believers, unbelievers,  atheists, critics or flatterers on the other. Why?

Because his God is not one of Catholics but of all humanity and his bounden duty is to be the ‘Servant of servants’, not proselatizing “a solemn nonsense!” For that he placed himself one step below the laity. Therefore he has no enemies, only friends, especially those  most need and left abandoned on the road side or in a war zone or stricken with Corona Virus.

Therefore he prayed on May 14th with all and for all, irrespective of Politicians and bishops who are taking sides, for and against, Silvia Romano, who returned to Milan, after getting converted to Islam during her stay or forced indoctrination in Somalia.

Politicians in Italy are taking sides for and against Silvia for becoming a Muslim and Pope Francis has kept his mouth shut, since choosing any religion or no religion is the sovereign right of every individual. The issue here is Silvia Romano, now 24, was serving as a humanitarian volunteer in Kenya when she was kidnapped 18 months ago by militants linked to Somalia’s radical al-Shabab terrorist group and now she has become Muslim taking the name “Aisha.”

Politicians in Italy  bent on making profit and selfish gain even in the worst of human tragedies, citing or justifying political or religious considerations in the case of Silvia. Pope Francis has refused to be drawn into this controversy, and rightly! How can he be blamed, he has to be imitated by all and sundry, since believing in a religion or no religion is the right of every individual!

Please read below article of Pope’s brotherly prayer and cotroversy on Silvia Romano becoming a Muslim!

News Analysis: ROME – Yesterday was a special day of universal prayer for healing from the coronavirus proposed by the “Higher Committee for Human Fraternity,” a body formed in the wake of Pope Francis’s 2019 trip to the United Arab Emirates, and the “Document on Human Fraternity” he signed there along with the Grand Imam of Al-Azhar, Ahmad al-Tayyeb.

Francis embraced the call for a May 14 day of prayer by all religious traditions earlier in the month, and he began his livestreamed morning Mass yesterday by referring to it.“We’re all brothers, as Saint Francis of Assisi said,” the pope said.

“For this reason, men and women of every religious confession today are uniting in prayer and penance, to ask the grace of healing from this pandemic,” Francis said. (The irony that the “Higher Committee for Human Fraternity” is financed by the UAE, which is presently engaged in conflicts in both Libya and Yemen in violation of a UN arms embargo, and that its government has a decidedly mixed human rights record, obviously isn’t lost on Francis, but his approach seems to be to welcome positive initiatives wherever they originate.)

At least here in Italy, however, where the pope’s injunctions usually have the widest resonance because it’s his own backyard, the initiative came at a moment when many Italians aren’t in an especially fraternal mood.

Instead, the country has been lacerated by a controversy surrounding Silvia Romano, now 24, who was serving as a humanitarian volunteer in Kenya when she was kidnapped 18 months ago by militants linked to Somalia’s radical al-Shabab terrorist group.

News of her liberation late last week initially prompted national celebration, but things quickly took a vicious turn when it emerged that Romano had converted to Islam during her captivity and taken the name “Aisha.” In conversations with government officials, she’s reportedly insisted that her conversion was uncoerced, calling it the result of reading the Quran and discussing the faith with one of her captors.

The revelations about her conversion triggered a particularly nasty bout of commentary, both on social media and in political circles. One leading conservative politician, Vittorio Sgarbi, actually suggested Romano be prosecuted.

“If the mafia and terrorism are analogous, in that they both represent a war on the state, and if Silvia Romano is radically converted to Islam, she should be arrested for material cooperation with a terrorist association,” Sgarbi said. “Either she repents, or she’s an accomplice of the terrorists.”

Sgarbi is now one of several prominent figures reportedly under investigation by a Milan prosecutor under “hate speech” provisions in Italian law.

At lower levels, vitriol in social media messages and comments posted at the end of news articles has been widespread. One poster to a major news site, identified as “Max,” wrote, “I’d have left her in Africa,” while another, called “Rocco,” suggested “sending her back and making her repay whatever this operation cost.”

Such reactions have deep roots in Italy, which have been turbo-charged over the last decade by the European migrant and refugee crisis and perceptions that the country is being “overrun,” mostly by Muslim immigrants seen by some as incompatible with Italy’s cultural identity. Even now, after more than two months in which he’s been largely invisible because he’s out of power, Matteo Salvini and his far-right Lega party poll ahead of every other political faction in the country, with a stable base of about 30 percent support.

In that context, Catholic leaders have struggled mightily to make the case for fraternity, not to mention patience. On the eve of the fraternal day of prayer, the pope’s own newspaper, L’Osservatore Romano, carried a long editorial by Italian poet and writer Daniele Mencarelli denouncing what he called an “incredible sequence of filthy judgments.”

“Without compassion, man sets himself up as a judge, committing the clearest and most ignoble denial of the Christian message,” Mencarelli wrote. “Our era is bulimic with judgment,” he wrote. “We know with perfection what others are doing wrong, and we’re ready to throw stones without mercy. Fortunately, there’s still a form of humanity that loves, and that offers itself to others.” “Welcome back, Silvia,” Mencarelli concluded, “take all the time you need.”

The editorial built on earlier praise for Romano’s courage and desire to serve shown by Avvenire, the newspaper of the Italian bishops’ conference, which called her an “ambassador of a better Italy,” and the widely read Catholic magazine Famiglia Cristiana, which termed her “an example for our young people.”

Cardinal Gualtiero Bassetti of Perugia, president of the Italian bishops, said all Italians should feel that Romano is their daughter, terming her “a young woman with grit, and this inner strength is surely what saved her.”

Despite controversy, Italian prelate embraces kidnapped woman as ‘our daughter’

It’s not clear if this campaign of compassion is cutting much ice. Il Giornale carried a piece in response titled “A Church enthusiastic for conversion,” lambasting official Catholic commentary as representing the sort of Church that appeals to “hypocritical Catholics as well as the innumerable atheists, agnostics, spiritualists, pantheists” and so on.

The newspaper reserved special derision for Father Enrico Parazzoli, the pastor of the small Milan parish attended by Romano’s family, who said her conversion merits “great respect” and that “only she can say if Islam is the right answer for her life.”

“Maybe he didn’t realize it,” Il Giornale wrote, “but in saying that, Father Enrico resigned as a priest. Priests are entrusted with the apostolic mission, and whoever stops evangelizing and starts to bless somebody’s ‘Quranization’ is no longer credible and should change jobs, maybe getting hired by one of those magnificent, Islamophile NGOs.”

The unplanned juxtaposition of the May 14 Day of Prayer and the Romano controversy here in Italy, therefore, perhaps illustrates two truths.

First, Pope Francis will miss no opportunity to embrace calls for human fraternity and interfaith solidarity, no matter where they come from. And second, the challenges to fraternity in a polarized age don’t seem to be receding anytime soon.