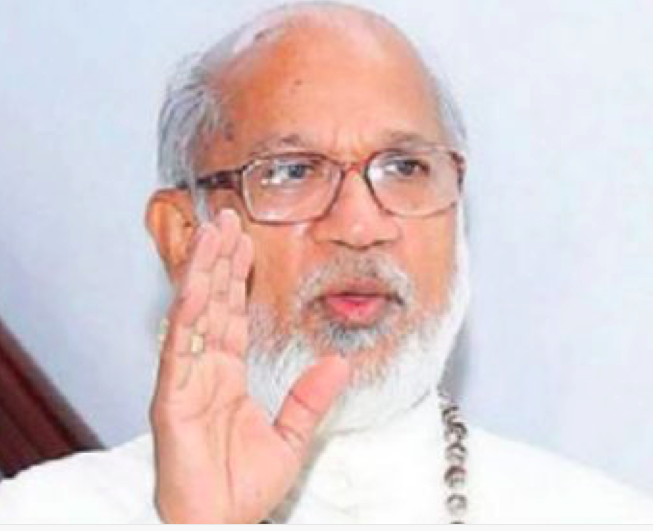 (Note: There is no Saffron wave, and Cardinal Alancherry is right on it. There was one when Modi  was the rising star in 2014, now the star is falling  starting

with the Delhi  debacle and Bihar trouncing and Saffron flag will continue to fluctuate up and down as the  wavers are totally  dependent on Modi’s  fortunes. There is no democracy at play either in the current  elections, there is only a tug of war between money bags. Hundred  to thousand crores reportedly  are spent to by votes. That shows how cheap Indian voters have become. In amassing and parading money power in 50 crore churches in posh cities churches are not second to any political party. Pope John Paul II made history by making public apologies for many things his church has done, not the church or church men in India. They don’t seem to believe in dialogue or transparency. Nor have they put up Parish financial committees or Parish pastoral committees ordered by Vatican Council  fifty years ago. There is no transparency either in politics or in religion. james kottoor, editor)

Kochi: Cardinal Mar George Alencherry, head of Syro Malabar Church, says BJP must apologize for the Babri Masjid demolition and fully reveal its funding sources for the Christian community to trust the party.

One of the many Vedic myths about the rudraksha is that the first plant sprouted from tears shed by Lord Siva when a deep desire to help the world overwhelmed him. And till date it is believed that these beads insulate you from all negative forces.

But Cardinal Mar George Alencherry wears a heavy rudraksha rosary, the insignia of Hindu sanyasins, for a different reason. “Rudraksha is a symbol of renunciation and saintly life. I deem it only appropriate for a churchman to wear it in India,” says the Major Archbishop of Syro Malabar Church.

It is in no way an attestation of the upsurge of Hindu forces, and he terms the frenetic effort by BJP to win a seat in Kerala as “a usual churning process in a democracy”. But the Cardinal is advising abundant caution to voters about the saffron wave.“I have no difficulty in BJP’s growth. And all such forces contribute to democracy. But it is the associate organizations of the party with pronounced communal agenda that make me uncomfortable,” says the Cardinal as he keeps The Lost Symbol aside. The tagline of the Dan Brown book ­ what was lost will be found ­ stares at him from the back cover.

“I liked The Da Vinci Code also, though Dan Brown is not my favourite author,” he says before interpreting the political codes that make the 2016 polls an interesting jigsaw. “There is huge play of money. The spending at the government level and now by the party has been phenomenal. This money power is worrying me,” he says.

“If Modi’s predecessors also had such funds at their disposal, why weren’t they used? Or did they siphon it off? If not, how is Modi government spending so much? From where does BJP get such liberal sponsors,” the Cardinal asks while adjusting the rosary with a wooden cross bearing the image of the crucified Christ.

If this support is coming from sources with vested interests, there are more reasons for the society to be vigilant. “Social forces shouldn’t be allowed to control our thought process. If we lower the guard, they will hijack the agenda,” he points out.

Elections give people an opportunity to show their power in regulating such tendencies. “This is not a fear. But an anxiety. And a reminder that a society has to be on alert about such movements. But if the BJP turns it into an inclusive initiative ensuring all-round development and uplift of the poor and minorities, I will be the first to accept a new thought,” he says.
But he will host the convocation only when “they convince our society that its sponsors have no strings attached to governance.” For, if there is a hidden agenda behind such flow of funds, it is worse than all other forms of corruption.

“I am wary of this chain of invisible people tightening their grip on our society and its thinking,” he says. For him it is not just a poll-eve preaching.
“Each element of concern plaguing minorities was well narrated to Prime Minister Narendra Modi when I met him on two occasions. He had categorically assured that our anxiety will be addressed. Sadly, I am yet to see results on the ground,” the Cardinal says citing many incidents of attack on churches and missionaries.

“If BJP is doing all corrections and outreach initiatives that they claim to have done, why were there setbacks in many states? These defeats further reinforce our belief in democracy . They have to earn the trust of minorities and society . There are no shortcuts,” he says.

By shortcut, does he mean truck with Vellappally Natesan’s BDJS? “BDJS needs to be seen only as another experiment. And I don’t criticize individuals. But if someone’s vitriol vitiates the atmosphere, the judiciary must take action,” he says.Should Vellappally then apologize for his communal statements?

The cardinal brings in the Church as an example.“Politicians never apologize. If they had the culture of accepting a mistake, our debates would have been more meaningful. Even the Church has said sorry for certain mistakes of our previous generations. But no political party does that.” Is that a message for the Sangh Parivar? Does he mean the BJP must apologize for the Babri Masjid demolition?

The Cardinal explains: “The BJP has never accepted its role. The party always maintained that it had nothing to do with the movement that resulted in the demolition. But it will gain them more credence if they own up ­ that is if they had had a role behind the act ­ and seek a public apology.” The Cardinal immediately adds that such a public apology might never happen given the denial mode in which the party has remained for past two decades and more.

“So, what will give you that level of confidence to accept the BJP?” “BJP needs to come out with a policy statement that explains its vision for minorities and explains how they plan to move towards many a development goal through inclusive strategies. They have to explain where minorities fit in their development projects. And more transparency about their fund collection drives. If they are ready to do it on these lines, I would express my total faith in that party.” On the matter of the existing political fronts, is it UDF’s policies or that of LDF which are in line with his expectations?

“Both have their positives. I cannot spell out my view clearly given my position. But my vote will be for a party that comes up with a line of action for social and religious development for a better society,” he says. “The Left has to revisit its ideology .During my talks with its leaders, I keep pointing out that the class war debate is past expiry date. It is time they showcased a new ideology,” the Cardinal says. The Left must strengthen India’s politics and take on divisive forces.

`Sometimes all it takes is a tiny shift of perspective to see something familiar in a totally new light,’ he quotes Dan Brown.Is that a message for the BJP too? “Well, that would be `open your minds, my friends. We all fear what we do not understand,” he says picking up The Lost Symbol and holding it close to the rudraksha rosary.(Source: The Times of India)