How the poison spreads – Bengal is sitting on a powder keg

(Note:  Given below is a very thought-provoking article by Mr Jawhar Sircar, who is one of Bengal's and India's greatest thinkers today. With his vast administrative experience, he has talked of communal harmony and implementation of law and order with lightening speed without appeasement (fear or favour) of any community.  It is a wake-up call for those in the helm of affairs in the Government and citizens alike, feels CCV's Associate Editor, Isaac Gomes). None can forget the painful scenes of mindless violence that followed the Partition, but as Govind Nihalani's iconic film, Tamas , showed, all that one needed to start a riot was to kill a particular animal and place its carcass before a place of worship. The business of riots is not really mindless, but what surprises old 'district magistrates' like us who have handled 'riots' is why they are allowed to recur and feed the new cult of communalism that has penetrated Bengal. Riots like those in Telinipara, Jagatdal and Chapra were quite bad but they died down because of prompt and determined handling, and because political parties did not politicize them with unconcealed relish. Unlike in western India, in Bengal, in spite of differences, there is just too much in common between religious communities which normally deprive riots of the hatred that is so essential to sustain them.

Yet, this same state is now consistently bandied as the bastion of communal hatred where things have turned so bad that the majority needs to be rescued immediately from the terror of the minority that is abetted by the local government.

Denial and protestations are not enough to stop the rot if the state is to remain one of the last few enclaves of secularism, which, incidentally, is a much hated word in many other parts of India. The trend and regularity of communal outbursts here are worrisome, and the narrative that is getting embedded is that one community leads them because it is pampered too much. This is the most dangerous of all psychological tactics because half- truths are mixed with Machiavellian intentions to ensure that the enraged victim community swings into immediate action and retaliates, which, of course, is less noticed. As the recent unprecedented ' religious' parades with threatening swords show and some recent electoral results prove, time may be running out. One has absolutely no quarrel with political choices, provided they are not secured through sectarian hatred and violence as these run counter to the Constitution and harm the wonderfully successful experiment in multi- ethnic, multi- linguistic, multi- religious coexistence.

It may be time to re- examine the need for symbolic public gestures made to instil confidence in one community, when they are systematically exploited and branded as pandering to only one religion. During a recent visit to Dhaka, I found a beautiful Madhubani art scene of Ram-Sita on the walls outside the university's college of fine arts.

Fundamentalists scream themselves hoarse at what they consider to be overt idolatry, but Sheikh Hasina Wajed's government is much too tough for them as she has the power to jail and execute those who murder others in the name of religion.

Wajed has frequently exercised this power to sustain secularism amidst real threats, but the Indian Constitution does not confer such strength on chief ministers in our federal polity. 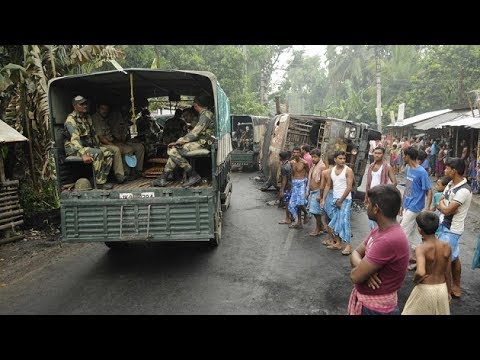 Let us not shy away from more unpleasant realities. The fact that immediate and demonstrative punishment was not meted out to the perpetrators of the mayhem in Kaliachak in January 2016 and in Dhulagarh in December that year rankles even those who swear by secularism.

Mistakes like these were enough to sustain those who live off hatred and the consequential votes.

Baduria is another classic case, where those who indulged in vandalism should have been picked up as soon as sufficient armed forces were available, irrespective of their religion. With every passing hour, the new but well- managed industry of hate relayed exaggerated accounts to every kind of media platform.

What the active telegraph of whispers and rumours did not mention was that the other community had also retaliated within a day or so, and the 'newsman's code' that prohibits the naming of communities actually strengthened the impression that the community that started the mayhem was uncontrollable.

It is apparent that the police-politician nexus at the panchayat and thana levels that had been nurtured by the Left and had caused its downfall is still firmly in place. New dimensions appear to have been added, like cattle smuggling and strongmen's exclusive zones. I got tired of explaining to my political bosses before I left them in 2006, to face their complete and incredible obliteration, that short- term tactic only creates an illusion of strength.

It may be better to lose a few MLAs and voters than to lose it all. An immediate message must emanate that communal incidents will invite a terrible retribution that is sharp and colour- blind.

In Kaliachak, the rabid comments of a minority-baiter set off the conflagration while in Baduria it was an objectionable Facebook item that exploded. Those who led the mobs felt that they could not let the hotheads take over and thus indulged in public competitions of excesses. This is where the administration needed to give a knock on the thick heads who have no idea how their acts of vandalism endanger their own community in other parts and how they pave the path for the enemies of secularism to take over. These self- styled leaders of communities are not caricatures: they are the essential feedstock on whom the hate-mongers thrive. A government that has established its concern for minorities really does not require people who are usually not held high in their own community and survive mainly through their political proximity.

Facebook is no more a social platform: it is now that dangerous provocative animal of Tamas, the dark night. A national spokesperson of India's ruling party got caught when she tried to pass off scenes of violence from Gujarat in 2002 as those from Baduria. Another leader from Haryana used a pathetic Bhojpuri film still of a woman being disrobed in public to claim that it was from Bengal. So desperate was an MP recently that he tweeted a photo perverting a news item into a lie of how a Hindu girl was stabbed to death. So determined is this 'fake news' enterprise to poison minds and to grab power at any cost that lie- busters had to come up to expose their bluff through net platforms like 'Alt News'. Yet, millions of unknowing victims continue to lap up and re- circulate whatever comes on WhatsApp and other such media, even as they insist that Nostradamus had predicted 400 years ago that Narendra Modi would arrive.

A large part of Twitter has been hijacked by trolls, who have driven out many a sensible voice from this medium.

The point is not that all who speak for our plural state are saints — which is ridiculous.

The important point is those who seek to destroy it are worse. A disaster called Pakistan does not deter these votaries of 'one religion one state', and how they seek to completely marginalize members of the minority community remains a mystery, however fearsome be it.

Common citizens like us welcome any battle for Bengal that is fought on issues of good governance and through a healthy debate, not on how to divide communities.

Jawhar Sircar is a retired Indian civil servant , who has 42 years experience in Administration, and is equally well known as a Researcher, Publisher of articles, Author and a Public Speaker. He served as Secretary of the Ministry of Culture, Government of India from late 2008 to February 2012, where he reported directly to the Prime Minister for most of his tenure.  He last served as CEO, Prasar Bharati from February, 2012 to October 2016.  He relocated to Kolkata in November, 2016 to take up his long pending Research and Publication work. He is Chairman of the prestigious Centre for Studies in Social Science, Calcutta (CSSSC). CSSSC is a Premier Research institute that has hosted numerous Foreign and Indian Scholars of the highest order and undertaken path-breaking research & publication in important disciplines of Social Science.