In Philippines silence on abuse is complicity – Silence equals complicity! 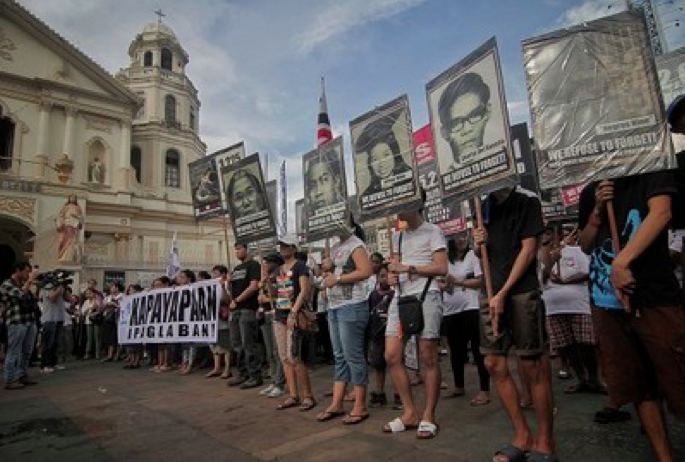 Those who are meant to uphold the values of life and liberty cannot remain silent.

Filipino activists stage a demonstration outside a Catholic church in Manila to call for justice for victims of summary executions in the country. (Photo by Vincent Go)

(Note: “Maunam sammatha lakshanam” is a Malayalam adage which means exactly: “Silence means agreement or complicity,” or an illicit approval of the crime or wrong doing. So it seems to be a universally accepted principle. Those who uphold the values of life and liberty cannot remain silent and still be true to their profession, faith, and values. This has many examples in our country, if we look at the silence of both our political and religious leaders. They are elected or appointed as leaders, first of all to speak out against (wrong doings happening under their eyes in an effort to curb them) or speak for good things being done, to promote them.

First glaring example in the country is the atrocities inflicted on Dalits and untouchable. When they happen Caste minded government officials keep mum. But our PM had at least the guts to shout once at them and say “shoot me first before you attack the Dalits.” But in the case of the kidnap and torture of the Dalit Bishop of Kadappa almost all Catholic bishops in India, except Cardinal Gracias, did not have the guts or moral courage to speak out against them. When racism prompted some Indians to kill one African, at least the Secretary of the CBCI publicly spoke out against it but kept his mouth shut on attack on Dalit Kadappa bishop. Already CCV is in receipt of a letter from Jayaraj Esukala General Secretary of South Indian Dalit Catholic Association (SIDCA), Hyderabad protesting against the transfer of Fr. AXJ Bosco SJ, who as an inspiring guide spearheaded the movement for the past 15 years. The letter implies that it is prompted apparently by caste tainted bishops for whom he is a bête noire .

What we want to drive home is that both political and Catholic spiritual leaders are notorious for their silence  in front of criminal happenings against which they should take action or at least protest and not remain tongue tied. As stated in the article below: “Failure to take a stand degrades and diminishes the national moral culture that is at the heart of right and wrong, good and bad, just and unjust. The moral values and principles and dignity of a nation, as found in its constitution, have to be defended or the soul of the nation will be degraded and blemished.”

Let not the Church leaders cause the trampling underfoot, or the merciless death of moral values they are elected and appointed to promote. james kottoor, editor)

Manila: In a world where violence and human rights violations are marked by a reluctance to take a stand against evil, not to report child abuse or oppose torture and murder is to be complicit in heinous crimes.

The silence that is born of the unwillingness to challenge the abusers and even the abusive authorities has to be seriously examined in individuals and communities. Why is it that thousands of children, one in four, according to some estimates, are sexually abused, beaten, hurt, and violated, yet the majority of cases go unreported, authorities are inactive, and justice is frequently denied to the victims?
The worst abuse is when an "amicable" settlement is reached between the child abuser and the parents or relatives of the victim. For a share of the payoff, a government official negotiates a settlement. The child's suffering is ignored and justice and healing are denied. This system must be stopped.
The victims' silence in the aftermath of these crimes is a result of trauma and fear. Victims of sexual abuse are, in most cases, unable to cry out and seek justice. They are just children, in cases where the perpetrator is a family member there can be pressure not to shame a relative, sometimes the child is wrongly blamed and has overwhelming feelings of guilt. They carry the secret buried in their hearts all their lives.
Victims of torture, police brutality, violence, human trafficking are frequently silent because they or their families may be threatened by authorities or powerful criminals. Silence in the face of crimes against the innocent when one should act for justice and speak out can be a criminal offense. It is also morally wrong. This is especially true of duty bearers, people in authority mandated to speak out and protect the community. Failure to report a crime is seen by some as complicity or being an indirect accomplice to the crime.
The reality of mass killings as in many countries like Rwanda, Syria, Kenya, in Bosnia and Herzegovina where the Srebrenica massacre happened, is a shocking lesson in the failure to protect vulnerable people.
In the Philippines, where criminal suspects are murdered, people of moral values and principles must protest at the inhumanity. They must never applaud or support a single death. The victims are only suspects; they are named, marked and killed without evidence or due process. We must act to stop such arbitrary killing and demand justice. If the rule of law does not apply to all it applies to none.
Where such systematic killing occurs all people must not remain silent and do little or nothing. The moral imperative is to open a dialogue with the forces behind such atrocities. Blessed are those who do so.Institutions that uphold moral values such as the right to life and due process are obligated to speak out against abuse and human rights violations. If not, their credibility is damaged and might be lost. They who uphold the values of life and liberty cannot remain silent and still be true to their profession, faith, and values.
Failure to take a stand degrades and diminishes the national moral culture that is at the heart of right and wrong, good and bad, just and unjust. The moral values and principles and dignity of a nation, as found in its constitution, have to be defended or the soul of the nation will be degraded and blemished.
When moral values are confined to the classroom and do not come to the forefront of a non-violent march, a peaceful protest, a statement denouncing wrong and upholding life and human dignity, they are dead. Society will be living in a graveyard surrounded by the corpses of victims. We ought to be haunted by our guilt, inaction and silence.
The anniversary on Nov. 23 of the massacre of some 58 people in the province of Maguindanao in the southern Philippines calls for protest. While many suspects were brought to trial, justice has yet to be handed down.
This silence in the face of mass murder is the worst example we can give the next generation. This is how it was during the years of martial law in the Philippines. A culture of silence and acquiescence to the horrors that pervaded society for 20 years. Many welcomed martial law as the solution to so-called anarchy but then, to their dismay, they realized the great harm and evil that it brought upon the nation.
Those brave enough to speak out and oppose oppression and evil were exiled or eliminated and killed. Others did unite and worked underground to expose the evil and bring down the dictator. Today we need the same voices and people of courage and bravery who can overcome fear and take a stand for what is just and right. What we cannot abide is silence.
Irish Father Shay Cullen, SSC, established the Preda Foundation in Olongapo City in 1974 to promote human rights and the rights of children, especially victims of sex abuse.