It is all About Peace in the Gas Pipeline TAPI 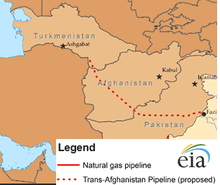 (Note: Science and technology are dragging people to stay together and work together. Instant communication has made this wide world into a global village where people are forced to rub shoulders with each other and support each other, not fight . But how is it possible if they stand back to back and refuse to face each other. This is the tragic comedy being played out knowingly or unknowingly, between India and Pakistan. We can choose our friends, not our neighbours. So India and Pakistan have to force themselves to work together where it is beneficial for both countries at government and people’s level. TAPI is the short form for “Turkmenistan-Afghanistan-Pakistan-India” the four countries which has to work together to make the Pipe dream a reality. Gas or energy at competitive price is the crying need of both the countries. A $10 billion project has been given a ground breaking ceremony, in spite of fears of possible terrorist from Afghanistan or Pakistan. One can only wish and pray that this dream project become a reality. james kottoor, editor)

After being called a pipe dream for decades, the Turkmenistan-Afghanistan-Pakistan-India pipeline came one step closer to reality on Sunday, with the groundbreaking ceremony at the Turkmen town of Mary attended by leaders of the TAPI countries. The pipeline, that is set to cross over 1,700 km, through Herat and Balochistan before reaching the Indian Punjab border, and will draw from the world’s second largest natural gas field of Galkynysh, comes full of promise. To begin with, it will reopen a historic route that reconnects South Asia to Central Asia, in the way it was before the British Empire sealed it off.

It will also bring India and its neighbours much needed energy at competitive pricing, and could easily supply a quarter of Pakistan’s gas needs, about 15 per cent of India’s projected needs, as well as Afghanistan’s requirements, by the time it is completed in the 2020s. This is a growing need, and even if India is able to source energy from other countries like Iran and further afield, both the proximity and abundance of Turkmenistan’s reserves, that rank fourth in the world, will make it an attractive proposition.
At a time when China has already secured nearly half of its energy requirements from the region, and is working on the $400 billion Russia-China gas pipeline, India has no time to lose in securing its interest in Central Asia. Finally, the TAPI pipeline gives this fractured region a reason to work on a project together as well, and it is hoped the shared stakes in TAPI’s success will ensure that India, Pakistan and Afghanistan find ways of cooperating on other issues as well.
However, the project faces the challenge of terrorism today. Unless the pipeline is secured from the Taliban that operates on both sides of the Durand Line, and from militant groups operating in Pakistan, it is hard to see how the TAPI dream can go beyond the groundbreaking ceremony. “By coming this far, we are overcoming a history of doubt and scepticism,” said Afghanistan President Ashraf Ghani at the ceremony. Certainly, the fact that the TAPI, pushed by Turkmen President Gurbanguly Berdimohamedov, was able to bring leaders of three countries with relations as complicated as India, Pakistan and Afghanistan share is itself remarkable.

To envisage a $10 billion project that traverses all three countries with all the bad blood between Afghanistan and Pakistan, and Pakistan and India, is ambitious as well. If it can manage to loosen the tight bonds between terror groups and their sponsors in Pakistan, who ought to see where their own interests lie, it will achieve the impossible; something no amount of pressure, cajoling and threat from India, Afghanistan and other countries has been able to effect in Pakistan thus far. The only way the project will be actualised is if the leadership of all four member-countries don’t just dwell on the world that exists today, but the region as it can be: connected, cooperative, peaceful and prosperous.
Editorial in the Hindu, December 16, 2015