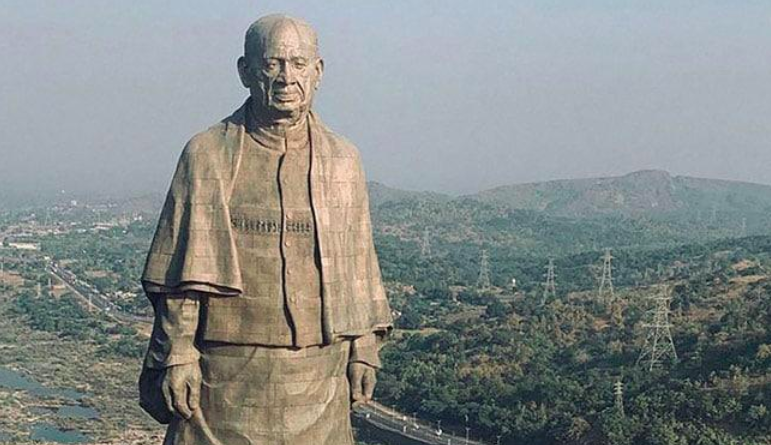 NOTE; (”Deepa Stampam Mahaschariam Namakkum kittanam panam”) Light house is marvelous, I too must get my share,” was the Kunchan Nambiar Kerala tradition. Deviating from that beaten track few critics of Patel Statue have come out with their own views. See them below.

No doubt Patel was rightly called the Iron Man but he was never the first in command in India, politically or morally. That credit should go to Gandhiji, Nehru and Ambedkar, who identified themselves with the poor and worked to raise them from their miserable plight.

Besides the statue dedicated to the nation has received opposition from tribal groups in Narmada district. Local tribal leaders had boycotted the
Wednesday event claiming “mass destruction” of natural resources due to the project.

I am what I think and believe in said Des Cartes.You must have a different view. Please let is listen to you. james kottoor, editor ccv.

What do people say on Patel Statue? Read it below.

Congress leader Shashi Tharoor on Wednesday wanted to know why BJP had not built a bigger statue for Mahatma Gandhi while they erected a 182-metre statue of Sardar Vallabhbhai Patel, his disciple.

Congress leader said there was no such gigantic statue of Mahatma Gandhi in the country."The biggest one is in Parliament. But this is a 182 metre statue for his disciple. Why is there such a big statue for a disciple of Gandhiji in the country where there is no statue of that size for the Mahatma?" he asked.

"Patel, a very simple person, was known as the disciple of Gandhiji," Mr Tharoor said. "I am asking a question…Is it right to erect such an imposing statue of Patel, a man of simplicity and a true Gandhian, who moved along with poor peasants," he said.

Mr Tharoor said BJP had no answer to the query why they did not erect a bigger statue of the Mahatma. The reason is that they do not believe in Mahatma Gandhi's principles of non-violence, he alleged.

He also alleged that BJP was trying to "hijack" the legacy of freedom fighters and national heroes like Patel as they have no leaders of their own in history to celebrate.

He said Sardar Patel was a Congress leader and BJP should not be allowed to adopt him. "Patel had worked along with Gandhiji and strengthened the Congress party. We should remember him always," Mr Tharoor said.

Congress president Rahul Gandhi on Wednesday accused the Government of "treason", saying there was a "systematic destruction" of institutions that Patel had helped build. Taking a swipe at Modi, the Congress chief tweeted, "Ironic that a statue of Sardar Patel is being inaugurated, but every institution he helped build is being smashed…The systematic destruction of India's institutions is nothing short of treason," he said.

In another tweet, Rahul said Patel was a patriot, who fought for an independent, united and secular India. "A man with a steely will, tempered by compassion, he was a Congressman to the core, who had no tolerance for bigotry or communalism. On his birth anniversary, I salute this great son of India."

"Patel, a very simple person, was known as the disciple of Gandhiji," Tharoor said. "I am asking a question…Is it right to erect such an imposing statue of Patel, a man of simplicity and a true Gandhian, who moved along with poor peasants," he said.

Mayawati said like Dalit leader BR Ambedkar, Sardar Patel was also a nationalist, She asked the BJP and its ideological mentor RSS to apologise for criticising her government for getting statues of Dalit icons installed in parks in Uttar Pradesh. Questioning the timing of building the Statue of Unity, Mayawati asked why didn't the BJP construct the statue in Gujarat for the many years it had been in power in the state.

"All those in the BJP, the RSS and company need to apologise, especially to the people of the Bahujan Samaj, for terming the statues installed by the then BSP government to honour icons like Baba Saheb Ambedkar and others as wasteful expenditure," she said in a statement.

You can’t compensate injustice to Sardar’s memory with a Disney-land-like attraction. To claim or assume that building world’s tallest statue in the name of Sardar Patel can get him the rightful place in history shows ignorance and lack of common sense.

Statue of Unity can be a tourist spot with people taking selfies at Sardar’s feet and from the balcony carved out of his chest. But the sheer size of this “Made in China” statue and the celebration surrounding it indicate megalomania of its chief visualiser – the Prime Minister.

If Sardar is the tallest in history by virtue of this statue, what would one make of his guru Gandhi and his place in the history, not to mention many other stalwarts? Are we going to measure historical importance in metres? It is difficult to understand how the Statue of Unity, chiefly a show by a Prime Minister not known for his inclusive tendencies, embodies any of the features of his legacy.