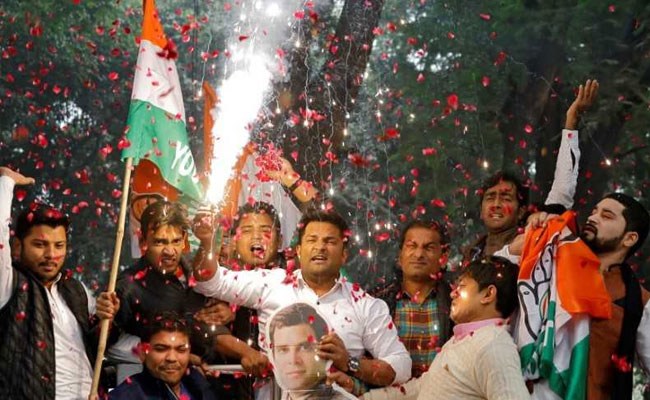 “Pappu Can’t Dance Saala” was a hit song from the 2008 Bollywood movie “Jaane Tu ya Jaane Naa”, a cute romantic comedy featuring the fresh faced Genelia D’Souza and the boy next door Imran Khan. It was also the title of another movie with the same name made in 2011. While penning these thoughts I was reminded of another Hindi movie “Raju Ban Gaya Gentleman” of 1992, starring Shah Rukh Khan and Juhi Chawla.

This led me to another song, “Baki jo Bacha Mehengai maar Gayi” from the 1974 blockbuster “Roti Kapda aur Makan”. Those not so familiar with Hindi will have to bear with me for my proclivity for the language in this piece. I live in the Hindi heartland so I find that its idiomatic expression is far better than the staid Queen’s English. Even the abuses in Hindi are far more colourful than the limited editions of F and Bs in English!

About 15 days ago, long before the exit polls or the election results, I had penned a poem in Hindi. Poems, like cartoons, can encapsulate a wider canvass than reams of prose. So here goes.

Loosely translated into English this would read something like this:

“Petrol diesel and the dollar have spiralled out of control

The Rafale fighters are yet to be seen

The people of Kashmir have been alienated

Those who are not with us are b…….ds!

Unable to fulfil their promises

They resorted to changing city names

Winning elections is all that matters

So relax and have a good time!

This is an ode to the Nation”.

Readers will hopefully agree that the Hindi version sounds better. These few lines have captured the angst of the people, or as Farookh Abdullah just said on TV “It is the mood of the nation”.

For years Rahul Gandhi has been derisively called “Pappu” – a simpleton, incapable of achieving great things. Post the 2014 rout of the Congress I too had written an article “Why Rahul Gandhi Should Quit”. Earlier columnist Shobhaa De had called him the dimpled darling, but then he seemed to have become the pimpled face of the party. I had therefore advocated that he take a two year hiatus from politics, go abroad, get married, and then return rejuvenated.

That isn’t quite how it panned out. But post the recent elections in five States, part of the cow belt, including three big ones in the Hindi heartland, I must frankly admit that he now seems wedded to Indian politics and embedded in the minds of the people amidst whom he tirelessly campaigned. Full marks to him. Small wonder then that seasoned political commentator Ashutosh wrote “RIP Pappu”, and Raj Thackeray said that Pappu is now “Param Pujya” (most respected), cocking a snook at the BJP. So the Pappu era has been given a decent burial. Raju the village ryot has run riot. He has become a gentleman, a suave, if not yet a media savvy, politician.

Rahul is now the dance wallah, who led the formidable trio of Modi, Shah and Yogi to a Merry Widow’s Waltz! To the punchline “Baki jo bacha mehengai maar gayi” I will add “Aur khet jo bacha gaay kha gayi”. That is, “Whatever remained was consumed by inflation, and the remnant in the fields was devoured by stray cattle”.

A recent lead story in the Hindustan Times noted that stray cattle, after the ban on cow slaughter in Yogi’s U.P., have become a major menace to farmers and their standing crops. In the cities they have outnumbered the traffic police, becoming a major traffic hazard. This is other than the catastrophic effect that it has had on the leather, glue and gelatine industries. Even gaushalas (cow shelters) have started turning out old and diseased cattle that have to fend for themselves, foraying and foraging into both field and forest. Yogi’s ham handed solution to the cattle menace is to have semen segregation of X and Y chromosomes, so that only cows are produced, not bulls!

This is like mad cow disease, and the voters in these States probably did not want to get infected by Yogi’s brand of politics. I have predicted that in another 10 years there will be hardly any cows in India, not because they are slaughtered, but because nobody will want to rear them. A milch cow costs a dairyman Rs 500/- per day in fodder. Hence after it becomes unproductive the natural thing to do is to quietly sell it to the butchers for slaughter. What most people don’t know is that cows are reared more by Hindu Ahirs, whereas buffaloes are the choice of Muslim Ghosis. This meant that Hindu farmers were selling their cows for slaughter. With that avenue now closed the Hindu Ahirs will also switch to milch buffaloes. So it will be RIP cow, thanks to Yogi, and RIP BJP if it persists with the likes of Yogi in its electioneering.

Farmers would have seen the writing on the wall, and would not have wanted the likes of Yogi to further aggravate agrarian distress through cow or temple politics. Small wonder then that he contributed in no small measure to the rout of the BJP. In many ways the poor rural voter is smarter than the urban voter who cannot look beyond his smart phone.

Bulandshahr, where cow vigilantes killed a police inspector, was the last straw. Yogi further aggravated the police force by shifting the blame for the “accident” from the vigilantes to the police. This would not have gone down with the IPS cadre, many of whom are intermarried with the IAS cadre. We forget that it is the bureaucrats that actually control the country, and if they are provoked beyond a point, they can use all their subtle machinations to scuttle the politicians. Kejriwal’s face off with the bureaucrats in Delhi is a case in point. Perhaps this could also have contributed to the downfall of the BJP.

As Farooq Abdullah says, it is the mood of the nation, not just of three States. In his post election victory speech Gentleman, not Pappu, Rahul, was gracious and magnanimous to his political adversaries in the States. He further said that he had focussed on three things – lack of jobs for the youth, distress of farmers and petty traders, and corruption as epitomized in the Rafale deal. In passing he had also mentioned the systemic erosion of hallowed institutions like the CBI and RBI. So insensitivity to the electorate and antagonising the bureaucracy have both backfired on the BJP.

In a recent piece in the Hindustan Times senior journalist Shekhar Gupta said that he earlier believed that demonetisation was Modi’s biggest demon. He has since changed his opinion to say that Yogi is Modi’s biggest blunder. Don’t expect a cleric like Yogi to believe this, because clerics have even bigger egos than politicians. But Modi, Shah and Ajit Dowal (their surgical and midnight striker) need to watch out, lest they score more own goals by relying too heavily on Yogi and his cow and cowering people style of politics.

For now let Rahul again be the dimpled darling as he and his team bask in an unexpectedly great victory. Indeed Pappu has learnt to dance. Balle, balle.

* The writer is a social thinker and political commentator.