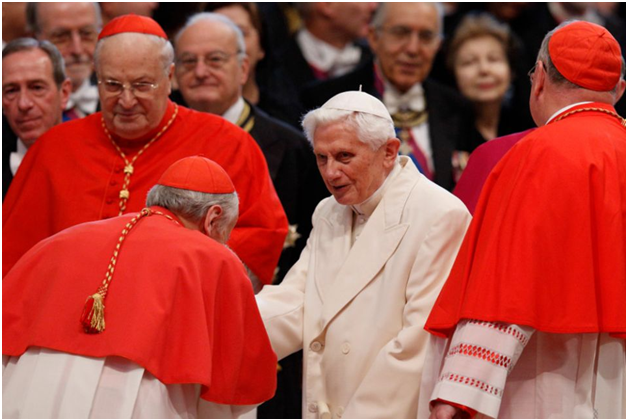 Cover image: Retired Pope Benedict XVI greets cardinals before a consistory for the creation of new cardinals in St. Peter's Basilica at the Vatican in this Feb. 22, 2014, file photo. (CNS/Paul Hing)

What about having two prime ministers like Modi and a PM Emeritus in the person of LK  Advanji? Unthinkable? Then what about having something similar in the Catholic Church? The  reigning Francis Papa and a shadow Pope Emeritus Benedict, capable of  giving Francis sleepless nights with his letters called theological musings?

They are not just short letters of three or four paras, but one like a theological  dissertation, a  lengthy 5,500-word text, published overnight April 10. It has killed the sleep of so many theologians around the globe and forced them to react, some very piously and politely but some quite bluntly with  cutting edge. But Francis goes on smiling as ever, as if he has not heard of it.

Stepping down from Throne

Of course Benedict did so many globe shaking  and mind shattering things. It started with the unheard of things like a Pope stepping down from his high  Papal throne to become a commoner, a nobody in the Church. It was all with the clear understanding and declared statement, he was disappearing from the public eye to live the life of a hermit, in contemplation and spiritual search.

His present public speaking came on the third anniversary of his stepping down from the Papal throne. Even apart from that he used to dress like and addressed as Pope Emeritus,  receiving public salutations and ceremonial kissing of the papal ring, which even the reigning Pope, calling himself only Pope of Rome, is discouraging! We published in CCV reports with the photo of Francis doing it. For writing a little blog on democracy and nationalism Advani is receiving attacks from Modi supporters

In this connection Gaillardetz and Bellitto, a professor of history at Kean University in New Jersey, both said Benedict's decision to continue wearing white after his resignation and to call himself the "pope emeritus," instead of some other title such as the "emeritus bishop of Rome," have not helped make clear that there is only one pope at a time." These decisions have rather predictably fed deeply troubling 'two pope' theories," said Gaillardetz.

Here below are a few samples of what balanced, concerned theologians across the world have  written. They say that Benedict's choice to engage in such public action undermines Francis and plays into narratives splitting Catholics between two popes, one officially in power, and the other wielding influence as he writes from a small monastery in the Vatican Gardens.

"Benedict told us he was going to live a life of quiet contemplation," said Christopher Bellitto, a historian who has written extensively on centuries of popes. "He has not. A former pope should not be publishing or giving interviews."

Richard Gaillardetz, a theologian who focuses on the church's structures of authority, called the precedent being set by Benedict's latest letter "troubling." The former pontiff, said the theologian, is offering "a controversial analysis of a pressing pastoral and theological crisis, and a set of concrete pastoral remedies."

"These are actions only appropriate for one who actually holds a pastoral office," said Gaillardetz, a professor at Boston College. "So now we have a situation in which a former pope is offering a parallel pastoral and theological assessment and a parallel pastoral and theological agenda that cannot help but be viewed as an alternative to the exercise of pastoral leadership of the current and only bishop of Rome," he said

Aaready in November 2016 came a book-length interview with German journalist Peter Seewald, where Benedict defended his 2005-13 papacy against criticism. "I do not see myself as a failure," he said in the book, titled Last Testament: In His Own Words. "For eight years I carried out my work." Here he appears to be answering some one who questioned his resignation, although no one has ever done that.

Another theologian Natalia Imperatori-Lee wrote about Benedict: "It is crucial that he (and, perhaps more importantly those around him) practice a ministry of silence lest it appear that he wants to undermine the current, only, Bishop of Rome, who is Francis." "To continue to speak on matters the pope is working vigorously to correct in the global, complex reality … that is the church is to encourage dissent [and] to flirt with schism," said Imperatori-Lee, a professor at Manhattan College. "Let the pope be the pope," she advised. "And let the pope emeritus pray for him."

Massimo Faggioli, an Italian church historian and theologian who teaches at Villanova University noted: "The institution of the pope emeritus in the age of mass media and of social media must be regulated carefully. The Vatican is a Renaissance court and it is difficult enough to govern one court without having to deal with a 'shadow papal court' — which is what we have today."

What to make of this development of a pope emeritus who emerges from the shadows unannounced from time to time to offer his comments on current affairs, or even on issues being handled by his reigning successor? As far as CCV is concerned, we are totally aginst, what retired Pope Benedict is doing, may be with the best of intentions.

But what is most admirable in the midst of all these biting  controversies – the fury of the winds and waves lashing against the bark of Peter to drowning point – is the sight of Francis sleeping soundly on the deck like JESUS in the Gospel story.  He does not seem to have even heard of the loud theological musings of Benedict.

He is busy kissing the feet of Muslim nations at war in Sudan, pleading: “war no more, violence and blood shed no more!” What is more most important: Stopping all war of words or war of swords on battle ground? May his kissing the feet, bring estranged hearts in mutual embrace! Most of the data above are collected from various articles, mostly from NCR. james kottoor, editor CCV.