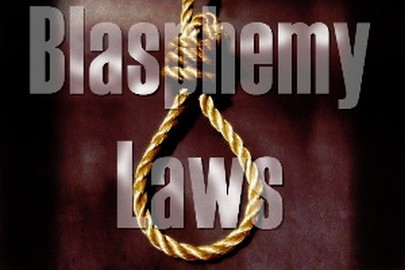 Assault came after laborer unwittingly used a banner with sayings of the Prophet as a carpet.

Lahore; (Story -UCAN) A Christian family in Pakistan’s Punjab province was beaten and paraded through a village on Tuesday by a Muslim mob after being accused of blasphemy, activists and police say.
During their ordeal the family’s heads were shaved, they added.
The alleged assault took place in Chak 460, a village in Sheikhupura district, some 30 kilometers from Punjab’s provincial capital Lahore.

Trouble flared after Owais Qamar, a Christian laborer, found a banner by a roadside and took it home to use as a carpet, police said.
The banner had the logo of the University of Sargodha with the words Hadith (Oh my Lord, increase me in my knowledge), written on it.
A Muslim woman, Kaneezan Bibi, accused the family of blasphemy after seeing the banner in the family’s home during a visit.
Soon after, a mob beat Qamar, his wife, Rukhsana, and sister-in-law Rehana.
Two village guards then shaved their heads and paraded them through the village on donkeys, an act of humiliation practiced in Pakistan, police said.
Their ordeal only ended when police arrived, Dr Riaz, Chairman of Alhpa Human Rights Care Association, told ucanews.com.
“The mob wanted to kill the Christians and file a blasphemy complaint against them, but Sheikhupura Police Chief Sohail Zafar Chatta defused the situation and persuaded the mob to withdraw their demand,” he said.
The Christian family was later whisked away from the village.
Farooq Ranjha, station house officer at the Saddar Police Station in Sheikhupura, confirmed the incident.
“Things are under control. We have placed the Christian family in the care of the Pakistan Minority Alliance [PMA] for safety reasons,” he said.
The PMA, a political group of religious minorities, strongly condemned the humiliation meted out to Qamar and his family.
“It is quite shameful how [they] were treated by hooligans over false charges of blasphemy,” he said.
“The family is in our safe custody now. They are unlikely to go back to the village, where they have a house and relatives,” he said. “Once any minority member is accused of blasphemy, it becomes impossible for him/her to live freely.”
The PMA chairman also called for strong action against those who assaulted the family.
In a press statement, Legal Evangelical Association for Development (LEAD), a non-profit Christian law firm that takes up cases of persecuted minorities, condemned the incident.
“We demand the Punjab government act against the people who subjected the Christians to such inhuman treatment,” Sardar Mushtaq Gill, head of LEAD, said.
Blasphemy, which carries life imprisonment or the death penalty, is a highly sensitive subject in Pakistan, where mere allegations have led to mob attacks and murders in recent years.
Former Punjab governor Salman Taseer and minority affairs minister Shahbaz Bhatti were assassinated after speaking out against the controversial law.
The two had objected to misuse of the law after Asia Bibi, a Christian woman, was sentenced to death.
Source: UCAN