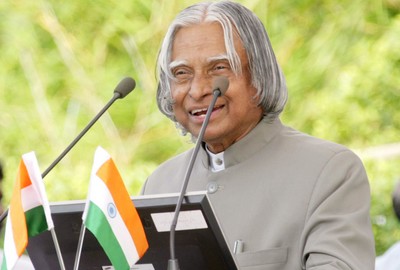 A.P.J. Abdul Kalam, who rose from humble beginnings to become one of India's leading scientists and later a hugely popular president, died in Shillong on Monday evening after collapsing during a lecture at the IIM-Shillong, plunging the entire country in mourning.

Kalam, who occupied Rashtrapati Bhavan in 2002-07 as India's 11 president, breathed his last at 7.45 p.m. at the Bethany Hospital where he was rushed to from the IIM where he was delivering a lecture on "liveable planet", officials at the premier institute told IANS.

The 83-year-old Kalam, who had been lecturing at the IIM-Shillong since last year, reached the institute at 5.40 p.m. on Monday. According to its director Amitabha De, he was taken to the guest house where he rested for a while and came to the lecture hall at 6.40 p.m.

"Kalam must have barely spoken for five minutes when he suddenly collapsed," De said, recalling the tragedy. "We rushed him to the hospital by 7 p.m. where he passed away."

Meghalaya Governor V. Shanmuganathan said the doctors "made enormous efforts to save him but we lost a great leader". Meghalaya Chief Secretary P.B.O. Warjri broke the news to IANS: "Kalam is no more."

Doctors at the hospital said Kalam was brought "almost dead" after suffering a cardiac arrest. Hospital director John Sailo Ryntathiang said they did their best to revive him. But he could not be saved.

As the news spread in the Meghalaya capital, thousands of tear-eyed people gathered at the Bethany hospital, shouting "Kalam Amar Rahe" and followed the army ambulance that took his body to the Military hospital where it will ke kept overnight.

Meghalaya Deputy Chief Minister Roytre Christopher Laloo, who was at the hospital with his colleagues, said Kalam's body will flown to New Delhi via Guwahati in an air force helicopter on Tuesday morning.

President Pranab Mukherjee, who is in Karnataka, led the nation in mourning Kalam. Saying he will "cherish" their long association, Mukherjee said: "Dr. Kalam will be long remembered for his passion for science and innovation…."

The government has announced a seven day state mourning, till August 2, during which the national flag will flay at half-mast and there will be no official entertainment. The date, time and venue of the state funeral will be intimated later, the union home ministry said.

Former prime minister Manmohan Singh recalled he had worked very closely with Kalam and "greatly benefited from his advice".

Congress president Sonia Gandhi called Kalam "a scholar-statesman and one of the greatest scientific minds". L.K. Advani, who was deputy prime minister when Kalam became president, said he "served Mother India literally until the last breath".

Other leaders and scientists also mourned his death, while gloom spread in his hometown Rameshwaram, a Hindu pilgrim town in coastal Tamil Nadu, 600 km from Chennai.

One of India's most accomplished scientists, Kalam — widely known as India's "Missile Man" — was awarded the Padma Bhushan in 1981, Padma Vibhushan in 1990 and Bharat Ratna – the highest civilian honour – in 1997.

The Bharat Ratna came just a year before Kalam played a key role in India's nuclear test at Pokhran in Rajasthan in May 1998, soon after Atal Bihari Vajpayee became the prime minister.

Born on October 15, 1931, Kalam went on to become one of the most celebrated aerospace and defence scientists in the country.

Kalam's early years were, however, steeped in poverty when, as a mere eight-year-old, he hawked newspapers to supplement the income of a large family.

There were times when food was scarce in the family and his hard-pressed mother stretched every resource to the utmost to keep her five sons and daughters as well as her boat owner husband and his brother's families fed, clothed and in good health.

By his own admission, Kalam would wake up much before dawn to distribute newspapers in the town after collecting newspaper bundles at the Rameshwaram railway station. The tough routine lasted a year.

His sister pawned jewellery with a moneylender so that the studious Kalam could have Rs.600 to join the Madras Institute of Technology.

Kalam contributed to the development of India's first satellite launch vehicle and was the architect of the country's guided missile development programme.

He became the head of the Defence Research and Development Organisation in 1992. He became the principal scientific advisor to the Indian government in 1999 with the rank of a cabinet minister. He held the post till 2001.