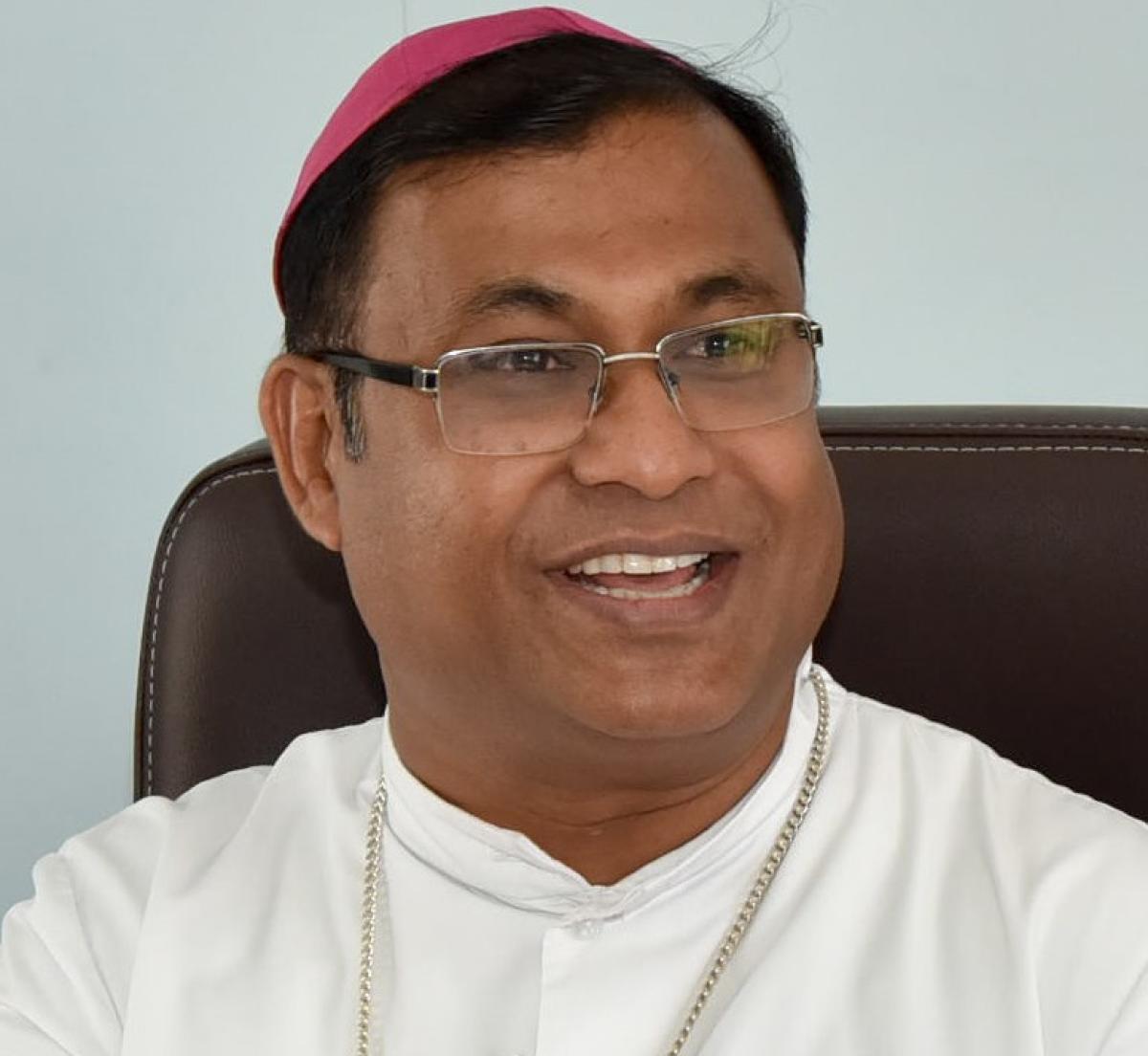 Writes an open letter to the Papal Nuncio, New Delhi

After chhotebhai and several others, now F.A. Nathan, President of New Life People's Party, a registered political party, formed for protecting the Minority Rights of the  Christians and for advocating Accountability and Transparency in Christian Life, writes to the Nuncio, New Delhi urging him to ensure transparent justice in the case of Bishop K.A.William whose murky dealings have hit the national headlines and painted a very poor picture of the Indian Catholic Church.  Nathan has also copied this letter to Cardinal Oswald Gracias, Secretary to Madurai Archbishop, Eliaz Vaz of All India Catholic Union, A.C. Michael and others. One wonders how many reminders the Nuncio will need to clean up his stable. Isaac Gomes, Associate Editor, Church Citizens' Voice.

I begin this Petition in the name of the Father, His son Jesus Christ and with the help and guidance of the Holy Spirit.

Greetings to you from, ‘NEW LIFE PEOPLE’S PARTY’, a Registered  Political Party in India ,formed for protecting the Minority Rights of the  Christians

and for advocating Accountability and Transparency in Christian Life.

I am76 years in age,  active and healthy with the Grace of Our Lord Jesus Christ.At present I am the  President of the above named Political Party started in the year 2011 and Registered as a full fledgedPolitical Party in 2013 by the Election Commission of India. We are not aligned with any Political Party but will  support likeminded social conscious parties during Elections who assure us that the Christian Community Views and Rights will be supported by them.

I was  closely associated with the All India Catholic Union and had served two terms as the President of the Archdiocesan Catholic Association of Chennai. I have also  served 2 terms as the Secretary of the Indian Catholic Press Association.

Being  a devout Catholic and a follower of Our Lord Jesus Christ I am displeased and angered as the Church Authorities in India are unable or not inclined to take action on the rampant corruption, murder and Abuses that are committed by  the Bishop of Mysuru, K.A.William. The Bishop is using his enormous power and money to buy witnesses, threatening Priests and Victims and  bribing the Law and Order agencies with public  money, and is sustaining his position and Satanic Power. It is sad that many good  Christian families unable to digest the  devilish actions of this Bishop have left the Catholic Church and are joining Pentecostal Missions. This a great Tragedy, Shame and a terrible Loss to the Catholic Church.

Many of my Catholic friends who are equally concerned of the present state of affairs in the Catholic Church have addressed several letters requesting you to remove the errant bishop from his post and to conduct an independent Investigation comprising of Laity and concerned Priests to record all the details and to submit it to you for taking necessary action. We are willing to undertake or be a  part of this team if you appoint a Committee for this purpose.

This Scandalous matter has also found extensive coverage in both the Secular and Catholic Press and  Facebook- Social Networking.I am sure that you are well aware of the misdeeds and  totally callous Acts, purely satanic and unbecoming for a Bishop in the Catholic Church of God.

For your ready reference we submit the following some of  which has already been recounted in detail in many complaints/open letters to you, for your immediate action.

1.  Mystery surrounds the brutal murder of two ordained Priests,  Rev. Fr.Rafael Colaco on 28-11-2019 and Rev. Fr. William Albuquerque on 03-03-2020. The Accused Bishop uses and influences the local Police by paying hefty bribes and entertaining them on Saturday nights at the Southern star hotel, using the People money.

2. There is a serious allegation that the Accused Bishop has two mistresses and had sired two children by them, in contravention to the stipulation in Canon 277 (1&2). This shows scant regard for Church Rules and having enormous money at his disposal to support Two Mistresses and Two children on Public money of Catholics.

3.  The Accused Bishop and a diocesan Priest named Leslie Moraes were involved in Sexually Molesting and kidnapping (maybe Raping), an employee named Sahana who is a married woman. Last year this Women had released a Videorevealing all that had transpired. This Video went Viral. Sahana’s  Life was threatened by Police and by Hitmen set up by the Mafia Bishop William. There was no safety for her life and her family and hence she relented. The Accused bishop had paid Rupees Twelve Crores as Bribe to the woman to purchase her silence.

4. The Accused Bishop was also involved in financial misappropriation of public funds amounting to several thousands of Crores. This matter should be investigated fully as Accountability and Transparency should be the Hallmark values of all Christians and much more for a Bishop who is supposed to be a Shepherd having  Exemplary Character and a   Role Model , for  the followers of Christ.

5. 37 Priests had sent a Memorandum of complaints against the accused bishop to you and to the Archbishop of Bangalore, Rev.Peter Machado.This Complaint is still resting with you and  the Archbishop. Meanwhile the priests were threatened and transferred to isolated and remote parishes. This is a fit example to show that there is no proper and empowered  Monitoring Agency to take action on a Bishop as Canon Laws are their Protection.What will happen if the Law of the Land is applied?     The whole Catholic Church in India will be shamed because of  Devils like  K.A.Williams. If such cases should enter into the Courts I do not want to envision the plight of the Church Administration  under the RSS/BJP Rule.

6.  The Accused Bishop is like a Mafia Don and moves about protected by two hired henchmen named Anthony Dias and Alexander, wearing  khaki uniforms. Apart from this the Bishop has a few misguided and opportunistic Laity who are also Bribed to support him and give him a clean chit. This is the greatest Injustice they can show to the Catholic Church of God which is being occupied by Scoundrels and the Devil as envisioned by Archbishop Fulton J. Sheen in 1948 itself.

The matter regarding the  Accused  Mysuru Bishop William is not an isolated case or the only case in the Catholic Dioceses in India.There are many in the Catholic Church  like the Rapist Bishop Franco of Jalandhar, Bishop Gallela Prasad of Kadappa who had a family and son who was studying Engineering,etc. It is unfortunate that the Church in India does not have or not inclined to have proper monitoring of Dioceses even after the Holy Father had asked all the Dioceses to maintain a Book of Abuses. Also we are being informed that apart from Vatican, you nor any Cardinal in India are not empowered  to take action on the Supreme Diocesan King- the Bishop.Until the Canon Laws are suitably amended or fresh clauses included, the growth of such despicable Clergy will be on the rise. This is a very sorry state of affairs as you are unable to take action  on  many complaints addressed to you. As soon as the complaints arrive at your end , it is  being forwarded to  the Abuser to reply/ for his comments, and the replies are manipulated by the Accused for their own benefit and the matter ends there.This situation has to change if the Church intends to clean and reform herselfas per the vision and action of the Holy Father Pope Francis.

The only  way it could be accomplished is to appoint a Committee consisting of Concerned Priests and Laity who could investigate the various allegations and submit a detailed report with proof and sworn statements from victims, to enable you to take necessary action in consultation with Vatican. This will also prove that the Catholic Church encourages Accountability and Transparency.

Apart from the allegations of Abuses, Corruption and the Scandalous life of some of the Clergy, there are many suggestions for the Reformation and revitalising the Church in India.

1.Holding  a Vatican Synod of the Bishops and  equal number of Laity from the various Dioceses in order to bring necessary Amendments and inclusions in the Canon Laws and to Dialogue various other pertinent  issues that concern the Catholic Church as more than 35% of devout Catholics have left the Catholic Church to join with other Evangelical and Pentecostal Churches . For these Catholics to come back to the Fold of Jesus,  visible changes must be made and stern action should be taken on Abusers and Corrupt  Clergy.

We earnestly Appeal to you in the name of Our Lord and Master Jesus Christ to Instruct the Dioceses in India in your capacity as the Representative  of the Holy Father Pope Francis, to  implement the Decisions/Resolutions listed in the Second Vatican Council Documents,and to ensure that it is followed in Letter and Spirit.

We trust you will acknowledge this letter written out of anguish and concern for the Catholic Church we love and entrust this matter to the Holy Spirit to guide you in your actions.

Hoping for a New Life, filled with the Joy of a true, Holy Catholic Church of God , for all my brothers and sisters  and for the Generations to come.