Obama Speaks out against Gun Lobby 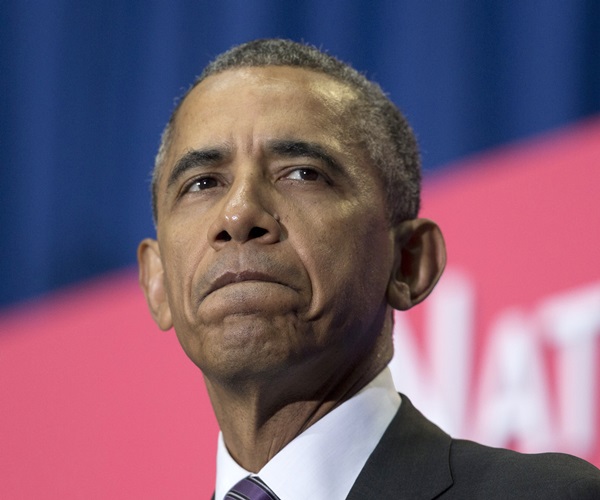 (Note: Finally Obama is speaking out. He has nothing to lose even if the gun lobby were to go to the extend of abusing him for the loss of their profit from selling guns to the domestic market. Profit is the only thing that count for the business class, not human lives or considerations or slogans like “Black lives matter” because it was always the blacks who were at the receiving end when the gun weakling US police exhibited their political clout. The constitutional right to bear arms for self protection should not be promoted at the cost of other’s right to gatherings to worship or peacefull assembly, is what Obama argued for. He did it possibly also to impress upon the new presidential candidates, Republican or Democrat, wo will replace him in 2017. As expected the Democrats praised him while the Republians opposed, as it happens also in India. Even in US the oppositions thinks it their duty oppose for the sake of opposing. But the voting public who have to bear the brunt of attacks from drunken gun welding criminals and terrorists, will be emboldened to vote according to their conscience. From 1998 to 2013, an average of 11,500 homicides each year were committed with guns in the U.S, according to data compiled by GunPolicy.org and number of deaths by gun in US in 2015 were 12,940. No other country in the whole world can beat US in this sport of gun sportsmanship. james kottoor, editor)

Wiping back tears as he remembered children killed in a mass shooting, President Barack Obama on Tuesday ordered stricter gun rules that he can impose without Congress and urged American voters to reject pro-gun candidates.

Obama made it clear he does not expect gun laws to change during his remaining year in office, but pledged to do what he can to make gun control a theme in the months leading up to the November election to replace him.In a powerful address in the White House, surrounded by family members of people killed in shootings, Obama's voice rose to a yell as he said the constitutional rights of Americans to bear arms needed to be balanced by the right to worship, gather peacefully and live their lives.

Obama has often said his toughest time in office was grappling with the December 2012 massacre of 20 children and six adults at an elementary school in Newtown, Connecticut."Every time I think about those kids, it gets me mad," Obama said, tears rolling down his cheek."That changed me, that day," he said, after being introduced by Mark Barden, whose 7-year-old son was killed in the shooting. "My hope earnestly has been that it would change the country."
After that tragedy, the Democratic president failed to persuade Congress to toughen U.S. gun laws. He has blamed lawmakers for being in the thrall of the powerful National Rifle Association gun lobby group.Obama, comparing the issue to the great civil rights causes of his time, is set to discuss gun violence again during a live televised town hall on CNN on Thursday, and during his State of the Union address next Tuesday. Vice President Joe Biden is slated to do a series of television interviews on the topic on Wednesday.

LEGAL CHALLENGES EXPECTED
The U.S. Constitution's 2nd Amendment gives Americans the right to have arms, a right that is fiercely defended.Obama laid out executive action he is taking to require more gun sellers to get licenses and more gun buyers to undergo background checks.

Under the changes, the U.S. Bureau of Alcohol, Tobacco, Firearms and Explosives (ATF) is issuing guidelines intended to narrow exceptions to a system that requires sellers to check with the Federal Bureau of Investigation to determine whether buyers have criminal records, are charged with crimes or have mental health conditions that would bar them from owning a gun.The proposal is "ripe for abuse" by the government, said Chris Cox, an official with the NRA, in a statement, adding that the group will continue to fight to protect Americans' constitutional rights.

Legal challenges to the changes, which are contained in guidance from the ATF, are expected.The crucial question in any direct legal challenge will be whether the ATF guidance creates new obligations, or merely clarifies existing law.The more the Obama administration acts as though the guidance has created a new legal requirement, the more legal trouble it might invite, said Lisa Heinzerling, administrative law professor at Georgetown University.

REPUBLICANS VOW TO FIGHT
Republican leaders were quick to denounce Obama's gun changes, with most Republican candidates for the 2016 presidential race promising to reverse his actions if they win the White House. Democratic candidates praised the moves. Reince Priebus, the head of the Republican National Committee, said the changes were "all about burnishing the president's legacy and boosting Democrat enthusiasm in a presidential election year."

Republicans who control Congress made it clear that they oppose the changes, although some downplayed their significance."Ultimately, this executive 'guidance' is only a weak gesture – a shell of what the president actually wants," said Kevin McCarthy, leader of the Republican majority in the House of Representatives.© 2015 Thomson/Reuters. All rights reserved.
*********************