Who is the next leader of the free world, now that the US is not? 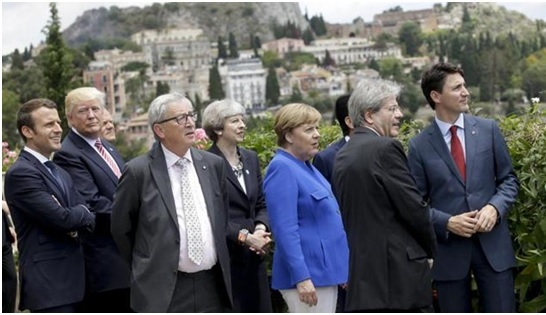 Who is leader of the free world today? Not Trump, the first US president since the 1930s who does not believe that international leadership is in the US national interest. Is it Europe? China?

(Note: Has G-20 become G-zero? The leader of G-20 (so far US) used to be the undeclared leader – some used to call it the world police – of the world. Now with the withdrawal of Trump from Paris treaty, who among the 19 could take up that leadership: Germany…France…?

But politics in Europe is volatile due to Brexit, the fly in the ointment called EU. Where  else to look for a financially strong, politically credible country or group of countries for leadership. Most of the places are flash points or hot spots of conflict.

Countries in the middle east are economically well off due to oil wealth but zero in democracy, and ISIS constantly on terror attack. Saudi Arabia is the richest, but it is in conflict with Qatar. What about Asian region and its giant killer China which is also the second largest economic power after US?

President Xi Jinping made headlines earlier this year at the World Economic Forum in Davos. China even suggested a regional partnership of ten Asian countries (RCEP), to be led by China. But what is its credibility compared to NATO or TPP? So for the moment we have to settle for a leaderless world until one person, Merkel or Macron, prove herself/himself to the rest of the world. May be it is better to pull together rather than leaving that job to one country which can turn rogue or insane, as it happened with US several times in the past. james kottoor, editor).

Donald Trump’s decision last week to remove the US from the Paris Agreement on climate sent a crystal-clear signal that we’re now living in a G-zero world, a world without consistent leadership. Who is leader of the free world today?

Not Trump, the first US president since the 1930s who does not believe that international leadership is in the US national interest. For Trump, everything is a transaction. He sees the world not as a community—sometimes cooperative, sometimes contentious—but as an arena in which strong leaders fight for dominance. This view appeals to Trump personally, and he knows his loyal supporters like it too.

Are Europeans now leading the free world? Not exactly. The transatlantic alliance has been gradually hollowing out for many years, and the election of Trump has veteran leaders like Germany’s Angela Merkel and new ones like France’s Emmanuel Macron scrambling for new strategies.

The Americans are sceptical of NATO, the British are leaving the European Union, and anti-EU political parties continue to make gains, even if they aren’t yet winning elections. Merkel and Macron don’t appear to agree on Europe’s best course forward, and if Europe’s leaders fail to meet the demands of their people for change, the populist forces that have transformed European politics in recent years will continue to rise.

The ground is also shifting in the Middle East. Trump may have better relations with Russia’s Putin, Turkey’s Erdogan, and Israel’s Netanyahu than Barack Obama did, but that brings no new order to a still-volatile region. On Syria’s battlefields, the US, Russia, Iran, Turkey, Saudi Arabia and Israel have distinctly different interests—and none of them is strong enough to impose its will.

ISIS will lose the little ground it has left, but it will continue to use new media tools to inspire followers, imitators, and the emotionally disturbed. The principal G-zero terrorism problem is that mutual suspicion, not the acknowledged need to share information among the world’s intelligence agencies, is now cyberspace’s defining feature. Nowhere is the G-zero more obvious.

India must lower its expectations on the Modi-Trump meet.The Indian American is no longer on the fringe of US pop culture.

Who now carries the standard for free trade? The United States, long its champion, has pulled out of the Transpacific Partnership, an agreement of historic scale that would have aligned large economies on both sides of the Pacific. Despite the best efforts of Japan’s Prime Minister Shinzo Abe, the US looks likely to remain outside the deal for at least as long as Trump as president. But this isn’t simply about Trump.

Remember that Democrats Hillary Clinton (reluctantly) and Bernie Sanders (resolutely) opposed TPP, as well. Trump has also made clear that he wants to rewrite the North American Free Trade Agreement with Canada and Mexico. A mega-deal with Europe, the Transatlantic Trade and Investment Partnership, now lies buried beneath the weight of opposition in multiple countries. There are still genuinely ambitious multilateral trade deals taking shape, notably Canada’s new agreement with the EU. But this is an exception.

Is China the new leader on trade? Not quite. President Xi Jinping made headlines earlier this year at the World Economic Forum in Davos with a rousing defence of global commerce. “Pursuing protectionism,” he warned, “is like locking oneself in a dark room. Wind and rain may be kept outside, but so is light and air.” But the China-led Regional Comprehensive Economic Partnership (RCEP), a deal composed of the 10 ASEAN countries plus Australia, China, India, Japan, South Korea and New Zealand, involves much less genuine market integration than the more ambitious TPP. It says little, for example, about investment, intellectual policy, and competition policy.

Then there is China’s “One Belt One Road” project, an enormously ambitious plan to direct massive investment toward south and central Asia to create new paths for commerce between Asia and Europe. If wisely executed, this project could provide an historic economic boost for China, the EU, and many poor countries between them. Unfortunately, there’s no guarantee that money will be invested for economic rather than political reasons.

Corruption and incompetence may well delay progress, dampen ambitions, and stoke political conflict. Nor is China ready to offer credible leadership on security questions, and the inability of China and the US to work together to resolve the North Korea problem suggests that conflict might trump commerce, even in East Asia.

In short, the number of global flashpoints and “problems without borders” continues to grow, and there are no credible cooperative plans to manage them, much less to solve the problems that have created them. For now, the G-zero order looks here to stay.

(Ian Bremmer is the president of Eurasia Group and author of Superpower: Three Choices for America’s Role in the World.)