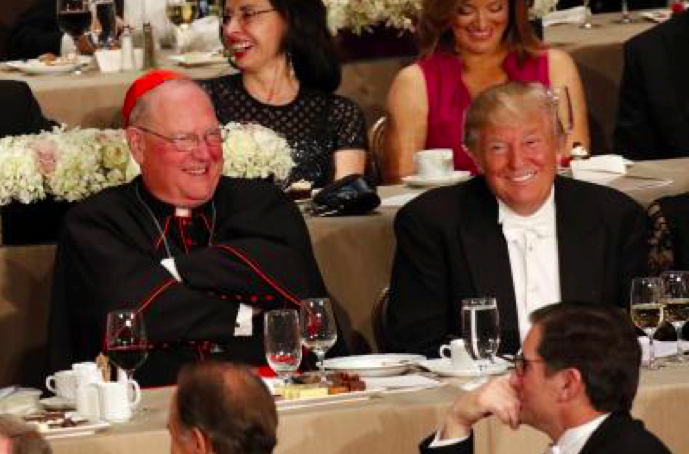 (Note: The central issue here is Limelight used to project two ideological incompatibles, a Cardinal and a Commissar, a religious and a political heads with well-known conflicting views. People in this world are of different or opposing views. To the extend that meeting of people of  diverse views  is meant to reduce conflict and increase agreement it ought to be most welcome because everyone has a lot to learn from his/her arch rivals and critics. So both need to be cmplimented.

Besides the Cardinal represents the Catholic Church. The meaning of Catholic is universal or all embracing. And Trump being the head of the nation has to be a president of all peoples of America, not of one religious group. So he is right in inviting various religious heads.

The very principle of Christian message is incarnational, to insert  itself like a leaven in the mass and transform society from within for the good. So  Church and churchmen have to be in the midst of places where evil and disagreements abound in order to reduce what is bad and promote good and cooperation. But how?  By telling politely and forcefully to Trump,  imitating pope Francis,  that a Christian has to be a bridge builder not a wall builder. Cardinal Dolan’s past performance points out that he would be a force for good at the inaugural function of President Trump. james kottoor, editor)

Cardinal Timothy Dolan of New York will be back in the political limelight next month, part of a “diverse set of faith leaders” who will “offer readings and prayers at the swearing-in” of President-elect Donald J. Trump, the presidential inaugural committee announced on Dec. 28.

“Since the first inaugural ceremony, our leaders have paid tribute to the blessings of liberty that have been bestowed upon our country and its people,” said Tom Barrack, chairman of the committee.

In a statement to America, Cardinal Dolan said he is “honored to have been asked to offer a reading from Scripture at the upcoming presidential inauguration” and looks forward “to asking Almighty God to inspire and guide our new President and to continue to bless our great Nation.”

The relationship between Mr. Trump and the New York archbishop is complicated. Following Mr. Trump’s victory, Cardinal Dolan wrote an op-ed for Catholic News Service, outlining how the church and the new administration might work together on pro-life issues, expressing “some cautious optimism.”

He went on to praise promises made by Mr. Trump during the campaign, including the appointment of pro-life Supreme Court justices and the enactment of conscience laws for health care workers opposed to abortion.

“We certainly hope that the policies pursued by the president-elect and his administration will match these promises,” he wrote. “In particular, we are eager to see immediate enforcement of federal conscience protections on abortion and elimination of the contraceptive mandate.”

But the cardinal has also taken issue with Mr. Trump’s hardline stances on immigration, including a proposal to build a wall along the U.S.-Mexico border. During the early stages of the campaign, way back in July 2015, he penned an op-ed in the New York Daily News, lamenting that “Nativism is alive, well—and apparently popular!”

He recalled a time in American history when many “believed the immigrant to be dangerous, and that America was better off without them. All these poor degenerates did, according to the nativists, was to dilute the clean, virtuous, upright citizenry of God-fearing true Americans.” The “more enlightened and patriotic” view, he continued, is to see “the immigrant as a gift to our nation.” The cardinal said he was “not in the business of telling people what candidates they should support or who deserves their vote.”

“But as a Catholic, I take seriously the Bible’s teaching that we are to welcome the stranger, one of the most frequently mentioned moral imperatives in both the Old and New Testament,” he continued.

In a Dec. 23 interview with Fox News, Cardinal Dolan predicted, “just as we had some conflicts with the president who is going out of office, I’m sure there’ll be some tension with the one coming through. That’s the nature of this.”

He described a previous sit-down with Mr. Trump as “comfortable” and “pleasant,” and he revealed that he had extended an invitation to the president-elect and his family to attend Midnight Mass on Christmas Eve at the cathedral, as well as another invitation to pray together in New York on the Sunday before the presidential inauguration.

Mr. Trump and his wife Melania attended Christmas services at an Episcopal church in Florida where they were married 11 years ago. In October, Cardinal Dolan met with Mr. Trump and his wife Melania for a private conversation at St. Patrick’s Cathedral in New York at the request of the candidate. The following month, the pair were reunited at the Al Smith Dinner in New York, where Mr. Trump and Democratic nominee Hillary Clinton traded jokes while raising money for local Catholic charities.

Cardinal Dolan is no stranger to the political spotlight. In 2008, he accepted invitations to pray at both the Republican and Democratic National Conventions. The inaugural weekend will also include an interfaith service at Washington’s National Cathedral. Cardinal Donald Wuerl, archbishop of Washington, has been helping plan the event.

In addition to Cardinal Dolan, other faith leaders who will be on hand at the Jan. 21 inauguration include the Rev. Samuel Rodriguez, head of the National Hispanic Christian Leadership Conference; prosperity Gospel preacher Paula White; and Rabbi Marvin Hier, founder of the Simon Wiesenthal Center.(Michael O’Loughlin is the national correspondent for America and author of The Tweetable Pope: A Spiritual Revolution in 140 Characters. Follow him on Twitter at @mikeoloughlin.)

It is offensive for Cardinal Dolan to pray at the inauguration because it implies endorsement of Donald Trump. Trump is an admitted sexual assailant, a bigot whose hate-filled rhetoric has lowered the standard of public discourse, a blatant liar and a president-elect who will not put his businesses into a blind trust in order to avoid conflicts of interest. There is no justification for taking part in the inauguration other than toadying to power. Cardinal Dolan shames the Catholic Church by doing this.

Where will Dolan be when he finds out he's been conned by this moral reprobate? Maybe trying to get the stink off. How long till this man will retire?

A LITTLE HUMILITY The usual suspects—the never-Trumpers—are predictably getting ready to crawl out of their rabbit holes to spew their venom upon the decent folk of America who elected Donald Trump president of this country. A little bit of humility on their part would help a lot.

Dolan's falling all over this opportunity to ingratiate himself.

Why is it not surprising that Cardinal Dolan will be praying at Trump's inauguration? Instead of the smell of the sheep, it's the smell of money and power!