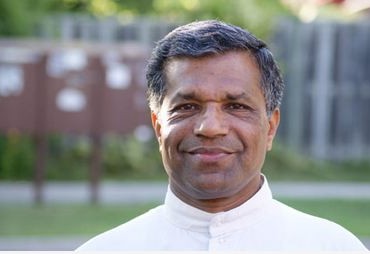 The announcement was made in the Vatican at 12.00 noon (3:30 pm India time) and simultaneously at the Syro-Malabar Major Archiepiscopal Curia, Mount St. Thomas, Kakkanad and in Canada.

An exarchy is an administrative set up in the Church which is not an eparchy or a diocese, but very similar to it. The Exarchy of Mississauga in Canada is the first exarchy for the Syro-Malabar Catholics living outside India. They were under Chicago diocese until now.

Fr. Kalluvelil was born November 15, 1955 at Thottuva near Kuravilangad, a parish in Palai diocese, Kerala. Now his family is settled in Jellipara, in Palghat diocese.

After his initial seminary formation at St. Mary’s Minor Seminary, Trichur, he did his philosophical and theological studies at St. Thomas Apostolic Seminary, Vadavathoor, Kottayam. He was ordained a priest on December 18, 1984 for Palghat diocese.

He was also Director of the Eparchial Pastoral Centre, Catechetical Centre, besides being one of the diocesan consultors. He obtained his Doctorate in catechesis from the Salesian University, Rome.

For the past two years, he was doing pastoral ministry to the Syro-Malabar faithful in Toronto.

According to official statistics, Canada has some 35,000 Syro-Malabar Christians. Many priests from various dioceses and religious congregations offer pastoral ministry in the different parishes and mission centers in Canada.

An exarchy can be raised to diocese when it has sufficient number of faithful, parishes and other structures. Many Syro-Malabar eparchies outside Kerala in India were in the beginning erected as exarchies.