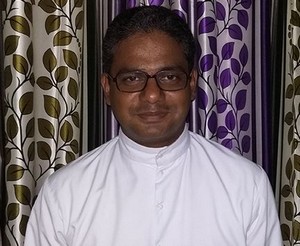 New Delhi (Matters India): Pope Francis has appointed a new bishop for Adilabad, the only Syro-Malabar diocese in Telangana state in southern India.

The appointment of Fr Antony Prince Panengadan as the second prelate of the 16-year0old diocese was simultaneously announced at 3:30 pm India time on August 6 in Rome as well as Adilabad and the Syro-Malabar headquarters in Kochi, Kerala.

Father Panengadan, 39, succeeds Bishop Joseph Kunnath, a member of the Carmelite of Mary Immaculate (CMI) congregation who was the first bishop of the diocese which was erected in 1999.

Bishop Kunnath resigned after turning 75 years of age, the canonical year for retirement of bishops. At the time of his appointment, the bishop-elect was Proto-Syncellus and the vicar of the cathedral parish of Adilabad.

Bishop Kunnath presented the newly appointed bishop with the sash, pectoral cross and ring, after the announcement at the Bishop’s House, Adilabad.

Bishop-elect Panengadan, who is also a CMI priest, was born on May 13, 1976, in Arimpoor, a parish under Trichur archdiocese, Kerala.

He had his philosophical and theological studies at Dharmaram Vidya Kshetram, Bangalore, Karnataka, and Ruhalaya Seminary, Ujjain, Madhya Pradesh. He was ordained priest on April 25, 2007. He started his priestly works as an assistant at the Adilabad Cathedral Church and became the parish priest of Saligaon.

He then left for Rome doctoral studies in Biblical Theology from the Urbanian University.

Besides Malayalam, he is fluent in English Italian, German, Greek, Syriac, Latin and Telugu.

Adilabad diocese has 40 priests who serving some 15,000 Catholics living in different mission centers. The diocese is engaged in social, charitable and health care apostolate.