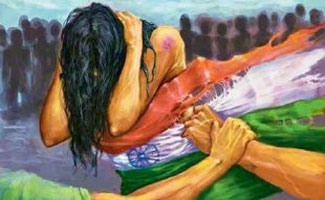 Today's the Telegraph Calcutta has an interersting report on  Fast Track Special Courts which need to be set up if India is to tackle numerous and increasing cases of  rape of children and women.  Only yesterday the national media and TV news channels covered the gruesome news of another child rape death in Rajasthan.  She was only seven years of age.  Along with the required legislation and more importantly its implementation, the need of the hour is for social/ behavioural scientists to come forward and brainstorm on the mindset of the perpetrators of this increasing menace.

If we were to add to this, the projection given below, including additional requirement of law officers, dedicated investigators and advanced forensic kits, we are forced to wonder if the perpetrators, especially those in powerful positions of our society, including the Church Hierarchy (the ones being investigated upon), committed these crimes in full knowledge that conviction will take ages, given the shortage of infrastructure for speedy trial.

The silver lining on the flip side of it is there will be space for more professionals both in the field of law and in the field of investigation to spring up more Sherlock Holmes.  But will the investigators be allowed to work with freedom, especially when such cases involve powerful persons?

In the Bishop Franco Mulakkal alleged nun rape case, the investigators are going very slow and yet to question the Bishop. Last night NDTV channel (and may be other news channels) showed that one Fr James Erthayil of Kanjirappally diocese, reportedly acting as an intermediary for the Bishop of Jalandhar, coaxing over telephone Sister Anupama, one of the nuns (who are supporting the nun who brought up the allegation of rape against the Bishop) of Missionaries of Jesus, to withdraw their support of the nun and ditch her. In return he said a new sprawling convent would be built for the nuns in Kanjirappally diocese in Erumeli. Sr Anupama retorted that none of them would back out of the case against the Bishop. The purported 11-minute audio tape of the telephonic conversation  is with Asianet and Times News Network. Isaac Gomes, Asso. Editor, Church Citizens' Voice. New Delhi: Over 1000 "Fast Track Special Courts" need to be set up across India as part of a scheme to try cases related to the rape of children and women, the Law Ministry has estimated.

These courts are to be set up as part of a larger scheme to strengthen infrastructure for better investigation and swift prosecution in such cases.

The Department of Justice in the Law Ministry has estimated an expenditure of Rs 767.25 crore to set up these special courts. The Centre will have to shell out Rs 464 crore as Central Funding, the department has told the Ministry of Home Affairs (MHA).

"It is estimated that a total of 1,023 FTSCs (Fast Track Special Courts) are required to be set up for disposing of rape and Protection of Children from Sexual Offences cases (PoCSO) with an estimated expenditure of Rs 767.25 crore out of which Rs Rs 464 crore as Central Funding on the pattern of centrally sponsored scheme," said a law ministry document.

The details worked out by it have been forwarded to the MHA.  The scheme is part of an ordnance recently promulgated to allow courts to award death penalty to those convicted of raping children up to the age of 12 years.

While bringing out the ordinance, the Government had decided to frame a scheme to set up an "appropriate" number of fast-track courts to try rape cases in the states.

The scheme will include components including strengthening of the physical infrastructure and prosecution machinery, provision of the required number of judicial officers for lower courts, additional posts of public prosecutors, dedicated investigators and special forensic kits. PTI