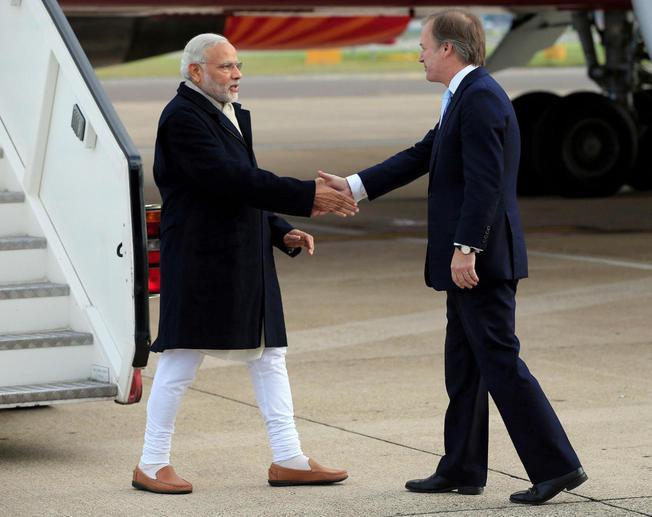 Indian Prime Minister Narendra Modi is greeted by Minister of State for the Foreign and Commonwealth Office, Hugo Swire, right, as he arrives at Heathrow Airport, London, for an official three day visit Thursday Nov. 12, 2015. (Jonathan Brady/PA Pool via AP)

(Pomp and Protests are the highlights of Modi’s visit to UK. Which of  these two take precedence in public perception, is the more important question. If protests, it will give a lot of food for thought for the present BJP government, if pomp a lot of money wasted at the cost of India’s poor. For any democracy to function fruitfully, it is not enough to have brute majority in the parliament, more important is the ideological majority, that is, if those who voted for Modiji which is 31 % are united in the common conviction that democracy is all about the common good, yes the greatest good to the greatest number of people in the country.People do only what they are convinced of, not what they talk. james Kottoor, editor)

LONDON (AP) — Indian Prime Minister Narendra Modi was welcomed to Britain with a military ceremony Thursday for a visit in which he will address Parliament, lunch with Queen Elizabeth II and sign billions in business deals with India's former colonial ruler, now an eager economic suitor.

Although it's not a state visit — since Modi is not a head of state — the Indian leader is being treated to full British pomp on a trip that comes amid rising troubles for him at home, where economic growth is slowing and political criticism is growing.After the welcome by an honor guard of Scots Guards, Modi was holding talks at Downing St. with Prime Minister David Cameron, who called the visit "a historic opportunity."

There's was some criticism of the star treatment, however, since Modi is a Hindu nationalist who has been accused of failing to stop growing religious intolerance and violence in India.Several hundred people, including Muslims, Sikhs, Nepalis and members of women's groups, protested Thursday outside Downing St., accusing Modi of overseeing the persecution of India's minorities.

Modi is due to address both houses of Parliament later Thursday. On Friday, he'll lunch with the queen and hold a glitzy rally, complete with fireworks, for thousands of supporters at London's Wembley Stadium.Cameron's Downing St. office said the two countries expected to sign billions worth of commercial deals during Modi's visit, including a plan for London's financial district to become a center of offshore Rupee bonds."This isn't just a historic visit; it's a historic opportunity," Cameron said, calling India and Britain "two countries tied by history, people and values."

The Confederation of British Industry, a business group, welcomed Modi's visit and praised his "business-friendly approach." But critics said Britain should be wary of the Indian leader's poor human rights record.Modi and his right-wing Bharatiya Janata Party have been criticized for not speaking out against religious attacks, including the lynching of Muslims for allegedly eating beef.More than 200 writers, including novelists Salman Rushdie, Ian McEwan and Val McDermid, signed a letter expressing concern about what they called "a rising climate of fear, growing intolerance and violence towards critical voices" in India. They urged Cameron to press Modi on rights abuses and human rights issues during their meetings.

India and Britain have close, complex ties dating back to Britain's time as colonial ruler until the mid-20th century. Nowadays, Britain is eager for more access to India's fast-growing economy and its mar    ket of 1.3 billion people.Indian firms have also made major investments in Britain, including Tata Motors' ownership of automaker Jaguar Land Rover. Modi is to visit a Land Rover factory in central England on this trip.

Modi swept to power in 2014 on promises to develop India's economy and root out the corruption and incompetence that had crippled the previous government. But his BJP party suffered a recent drubbing in an important state election widely seen as a referendum on Modi's popularity. And India's economic growth is slowing, although it still outpaces much of the world.

Modi has not always been welcome in London. Britain and the United States both barred him after 2002 anti-Muslim riots killed at least 1,000 people in India's western state of Gujarat, where Modi was then the top official.Muslim leaders and human rights groups said Modi did little to stop the violence, a charge he denies. India's Supreme Court has said it found no evidence to prosecute him for the violence.