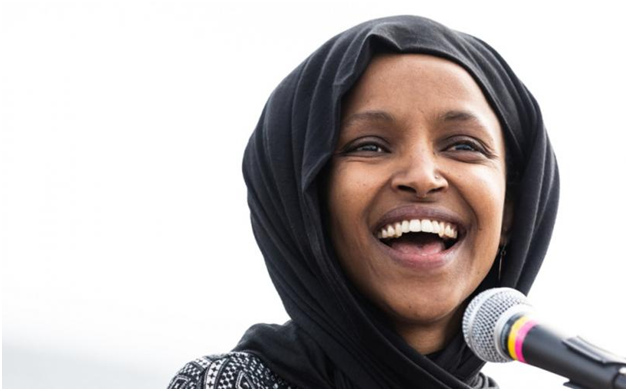 What  is ‘Doormat Christianity’?  submission to Islam

One of the least known tactics used by Muslims to disarm Christians has been to insist that Christianity is against warfare and violence in general.Rep. Ilhan Omar (D-Minn.).Paris Malone / Shutterstock.com, By Raymond Ibrahim.

The latest Muslim convert to take on the mantile of a Christian theologian reportedly is Ilhan Omar, originally from Somalia! Quoting biblical teaching, they are to love their enimies, not fight them.

Another phrase discussed is Doormat Christianity, mentioned often by Obama in connection with Crusades of the past. With the arrival of Francis, his war cry is “thou shalt not kill” going to the extent of abolishing Capital punishment altogether.

It is ‘Comonady or Tragedy’ of Constantine organized Christianity, that it was the first to take up arms for Jesus, the prince of Peace who commanded Peter to put his sword down.

Please read below the LifeSite report on Muslim-Christian debate on Conversion.

December 5, 2020 (American Thinker) — Past and present, one of the least known — and, until the modern era, largely futile — tactics used by Muslims to disarm Christians has been to insist that Christianity is against warfare and violence in general.

The most recent Muslim to take on this mantle of Christian theologian is none other than Somalia-born Rep. Ilhan Omar (D-Minn.).  Around November 18, after Sen. Marco Rubio (R-Fla.) criticized Georgia Senate candidate Raphael Warnock for claiming that Christians could not serve both God and the military, Omar, the Muslim, turned to quoting — that is, misquoting — the Bible.  In a tweet with an embarrassed face emoji, as if to suggest that what Rubio was saying was so embarrassing — in fact, the emoji was appropriate, but more because of her spelling errors — she posted:Mathews [sic] 6:24

No one can serve two masters, for either he will hate the one and love the other, or he will be devoted to the one and despise the other. You cannot serve God and dmoney.' [sic] The lies and smears of the GOP have no boundaries, but this is a disgrace and shameful.

Omar is hardly the first Muslim to try to manipulate Christian theology to Christians' own detriment and disadvantage.  For example, prior to the Crusader siege of Antioch in 1098, Muslim emissaries were sent to parley.  They told the Europeans how their masters were "amazed that you should seek the Sepulchre of your lord as armed men, exterminating their people [Muslims] from long-held lands — indeed, butchering them at sword point, something pilgrims should not do."

These diplomats said nothing about what "their people" had been doing to Christian subjects and pilgrims — that is, extorting, torturing, raping, and killing them — which is what occasioned the Crusades in the first place.

Similarly, Omar, who hails from a radically Islamic nation, Somalia — deemed the third worst persecutor of Christians in the world — would much rather scold Christians into disarming than have them resist violence, especially at the hands of Muslims.

In other words, she, like so many others, is an advocate of Doormat Christianity — a passive, nonjudgmental form of Christianity that deems lying down before an enemy virtuous.  Muslims and other elements are persecuting innocents around the world?  Show love and tolerance, turn the other cheek, say a prayer, and feel guilty for your own crimes — or even your ancestors' crimes.  That is one of the dominant strains of this brand.

Doormat Christianity was regularly on display during Barack Hussein Obama's presidency: "On Easter, I do reflect on the fact that as a Christian, I am supposed to love," he said in 2015 — three days after a terror attack targeting Christians killed 147 people in Kenya, provoking a few American Christian groups to express anger.  "And I have to say that sometimes when I listen to less than loving expressions by Christians, I get concerned."

Similarly, during the National Prayer Breakfast on February 5, 2015, Obama directly invoked Doormat Christian tenets to shame Christians from being too critical of Islamic State atrocities: "Lest we get on our high horse and think this [Islamic beheadings, sex-slavery, crucifixion, roasting and burying humans alive] is unique to some other place," the American president admonished, "remember that during the Crusades and the Inquisition, people committed terrible deeds in the name of Christ."

Speaking of the Crusaders, how did they respond when Muslim diplomats expressed their shock that they, Christian pilgrims, had come with the sword?  With more knowledge of Christian Just War theory than Omar, Obama, and their ilk would have us believe.

According to the account of Robert the Monk, with "one accord," the crusaders replied: No one with any sense should be surprised at us coming to the Sepulchre of Our Lord as armed men and removing your people from these territories.  Any of our people who came here with staff and scrip [unarmed pilgrims] were insulted with abominable behavior, suffered the ignominy of poor treatment and in extreme cases were killed.

Thirty years earlier, and as just one of countless examples, a German pilgrim wrote of what the Muslims did to a "noble abbess of graceful body and of a religious outlook" who undertook a pilgrimage to Jerusalem: "The pagans captured her, and in the sight of all, these shameless men raped her until she breathed her last, to the dishonor of all Christians.  Christ's enemies performed such abuses and others like them on the Christians."

Before the walls of Antioch, where the word "Christian" was first coined, the Crusaders continued by noting that the land "belonged to our people [Christians] originally and your people [Muslims] attacked and maliciously took it away from them, which means it cannot be yours no matter how long you have had it."  Accordingly, "payback will be exercised by Frankish swords on your necks!"

The modern reader may find such an approach extreme, certainly "medieval."  But 12th Century, Christians were fighting brutal holy wars for the proponents of Doormat Christianity, nothing less than total capitulation will ever do.  To quote Karen Armstrong, a former nun turned advocate for Islam, "During theagainst Muslims, even though Jesus had told his followers to love their enemies, not to exterminate them."In short, Christianity makes ample room for Just War — even as those who seek to subvert justice argue otherwise. (Raymond Ibrahim, author of Sword and Scimitar: Fourteen Centuries of War between Islam and the West, is a Shillman Fellow at the David Horowitz Freedom Center, a Judith Rosen Friedman Fellow at the Middle East Forum, and a Distinguished Senior Fellow at the Gatestone Institute.Published with permission from the American Thinker.)