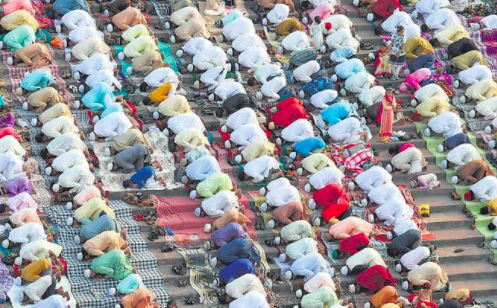 (Note: Change alone is the only constant in life. We have heard it and also experienced it in our daily lives. Then why wonder, if it is happening even among Muslims?

Another point to remember is that Islam remains the fastest growing religion with 1.6 billion followers across the world and acquiring new converts on an almost daily basis. On the other, it’s also facing a wave of desertions with moderate Muslims, mostly young men and women haunted by a sense of oppression, leaving it.

This is happening among all religions in India. Hence we speak of the increasing number of ‘Nones’ among the young  in the voting list. Is this not an indication of an aversion among the youth against all organized religions?

Therefore is not the Atheist Muslim the happy outcome of a conflict in one’s mind between a religion of blind beliefs and reasoned understanding, A Journey from Religion to Reason?  james kottoor, editor ccv.)

Please read below Hasan Suroor’s article in the Tribune

Already fighting on several fronts, Islam now finds itself up against a new challenge — this time not from extremists but from moderate young Muslims who are abandoning their faith, and mostly embracing atheism.

Last week, The Economist carried a piece on  young American Muslims who have left Islam, and highlighted the case of a boy whose African immigrant parents, suspecting his intentions, tricked him into going on a holiday with them to Kenya where they had made arrangements for him to go to a seminary to restore his faith. But somehow he managed to escape and return to the US.

The real story, however, is not the opprobrium apostasy attracts in Islam but the fact that despite the risks involved the trend is growing. And not just among Western Muslims. All religions frown upon apostasy but Islam is particularly hard on it. Although there is no explicit Quranic injunction against it — in fact, it clearly rules out any “compulsion” in religion — its enforcers have variously declared apostasy a sin, indeed, a crime akin to treason. In some Islamic countries it invites death penalty. Most are opposed to the universal declaration of human rights because it provides for the “freedom to change religion or belief”.

It’s against this background that the trend assumes significance. So, while on the one hand, Islam —notwithstanding all the controversies around it — remains the fastest growing religion with 1.6 billion followers across the world and acquiring new converts on an almost daily basis, on the other, it’s also facing a wave of desertions with moderate Muslims, mostly young men and women haunted by a sense of oppression, leaving it. Simon Cottee, a British academic, has documented stories of many former Muslims: The Apostate: When Muslims Leave Islam. In each case, reasons for their decision differ varying from religious bigotry and oppression to violence in the name of Islam.

Even deeply conservative countries with strict anti-apostasy regimes like Pakistan, Iran and Sudan have been hit by desertions. The Saudis were taken aback when two years ago an American magazine revealed the scale of Muslim conversion to atheism in their country, and more widely in the Muslim world. The numbers were eye-popping, ranging from hundreds to thousands in some countries. It’s claimed that the atheist-scientist Richard Dawkin’s God Delusion is the most downloaded book in the Middle East, particularly in Saudi Arabia. It’s now being translated into Arabic and there are plans to offer it free to Arab readers.

The exact figure of former Muslims may never be known as most remain in the shadows to avoid detection. Those who have “outed” themselves say they live in permanent fear for their own lives and safety of their families. In Pakistan, preachers have called for the houses of apostates to be burned down. They operate through loose networks spread across many countries under the umbrella nomenclature, “Ex-Muslims” and “Muslim-ish”. Oxford University academic Faisal Devji has argued that by retaining “Muslim” in their name, “ex-Muslims are recognising the theological character of their renunciation”.

“The Muslims among whom I was raised in East Africa included many who refused to pray or fast and were openly critical of religion. It would never occur to them to renounce Islam and proclaim atheism as a new identity or mission, which would have catapulted them back into a theological narrative,” he wrote in The New York Times.

One prominent ex-Muslim, Maryam Namazie, has called the trend a “ticking bomb” with a new generation of educated  Muslims — confused by the conflicting interpretations of the Quran and stark chasm between what Islam is said to preach and how it’s practiced — starting to question the fundamentals of their faith. They were brought up to believe that it’s the most perfect and peaceful religion. But, they claim, their own lived experience of Islam was quite different. In his book, Islam Without Extremes: A Muslim Case for Liberty, Turkish writer Mustafa Ayokal poses the question that, he says, “haunts the minds of millions of my co-religionists — is Islam a religion of coercion and repression? Or is it compatible with the idea of liberty…?”

For the first time, the narrative that it’s not Islam but its perverse interpretation that’s the problem is being questioned. According to ex-Muslims, Islam cannot escape blame completely for what’s being done in its name: the verses cited by jihadi groups to justify their actions do exist — and no attempt has been made to expunge them or contextualise them, the rationale being that divine revelations are “immutable”. Before jumping ship — most apostates claim — they made sincere efforts to clarify their doubts. It was only when — on the basis of their own independent reading of the scriptures — they concluded that they could not honestly continue to cling on to their faith that they reluctantly took the plunge.

Ali A Rizvi, a US-based Pakistani writer, describes his own dispiriting experience of how he came to lose his faith after wrestling with his doubts for many years in his new book, The Atheist Muslim: A Journey from Religion to Reason. Son of a Pakistani diplomat, he spent most of his adolescent years in several Islamic countries, including Saudi Arabia. He was hit by the gap between the benign Islam taught to him by his upper middle class liberal parents and the hate and prejudice-filled Islam practiced in the land of its birth. Amira, a young practicing American Muslim woman, has given an “intimate account” of her transition from a hijab-wearing devout Muslim to an atheist describing “the slow shattering of my Muslim identity”.

“Islam was my existence… Despite my devotion to lead a life that would please Allah I was ashamed to harbour secret frustrations with Islam that I could not reconcile,” she wrote on the online journal, The Ex-Muslims. Concerns about Islamic fundamentalism are increasingly becoming part of the dinner table conversation in moderate Muslim homes. In British Pakistani writer Kamila Shamsie’s new novel, Home Fires, a young Muslim woman expresses frustration with “a Shariah in which everyone is either an infidel or an apostate and that both categories deserve to die”.

Admittedly, there’s no way to verify all of ex-Muslims’ accounts or the real scale of the phenomenon, but even allowing for exaggeration, it doesn’t make a pretty picture. Attracting extremists while losing educated and liberal followers threatens to exacerbate Islam’s already serious existential crisis in the absence of any serious effort to halt the slide.

Note: The writer is a London-based commentator.