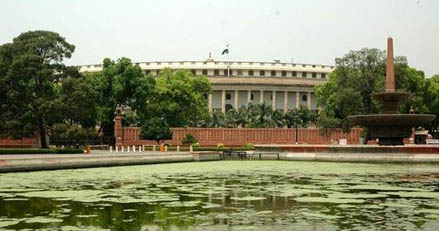 (Note: In the Lok Sabha there are 545 Members of Parliament (MP).  In the Rajya Sabha there are 245 members.  Each member is allotted Rs 5 Crore annually to carry out development work in his/ her constituency under the Members of Parliament Local Area Development Scheme (MPLADS). This means Rs 3,950 crore is distributable annually among 790 MPs to carry out development work in their respective constituencies.  It is time we asked our MPs, at least Christian MPs how they utilise their allocation. The reason is it has been reported that many MPs are short of projects and return the fund unutilised. This is inefficiency on the part of the concerned MPs who are not doing justice to their duty of representing their constituency in the parliament. If members of the Laity sit with the MPs of their respective constituencies, together they can work out development projects to ensure that the fund allocated is fully utilised.  It's high time we, including our community shepherds (Bishops) woke up and prodded our MPs for works of development in our dioceses. Isaac Gomes, Associate Editor, CCV). me formulated by Government of India on 23 December 1993 that provides that each Member of Parliament of India has the choice to suggest to the Head of the District works to the tune of ₹5 crore per year, to be taken up in his/her constituency. Initially, this scheme was administered by Ministry of Rural Development. Later, in October 1994, Ministry of Statistics and Programme Implementation (MOSPI) has been looking into its working.

Since the start there have been reports of malpractices in running the scheme and there have been demands to scrap it. In 2006, a scandal was exposed by a TV Channel, that showed MPs taking bribe for handing over project work under the MPLADS. A seven – member committee was set up to probe the matter.

Some new guidelines for MPLADS were announced by MOSPI :-

2. For smaller projects costing less than ₹2 lakh (US$3,100), the entire amount would be released at one go.

3. No project costing less than ₹1 lakh (US$1,600) would be sanctioned with exception in the case of essential projects, such as installation of hand pumps, and purchase of computers and their accessories, solar electric lamps, chaupals and equipments .

4. The basket of works that could be taken up under the scheme had been widened to include projects such as the purchase of books for libraries, and ambulances and hearse vans that would be owned and controlled by district authorities.

5. The purchase of Microsoft Office software along with the training of two teachers per school would be now allowed as part of an effort to promote computer literacy in the country.

6. MPs would be allowed to spend up to ₹10 lakh (US$16,000) a year on projects in any State or Union Territory other than the one from where they were elected.

7. A limit of ₹50 lakh (US$78,000) per annum has been imposed on contributions to trusts and societies so that more money was available for community-related works.

One MP – One Idea

The Ministry of Statistics and Programme Implementation has announced a new scheme “One MP – One Idea” under the Member of Parliament Local Area Development Scheme (MPLADS). Based on the innovative ideas received from the local people regarding developmental projects, an ‘One MP – One Idea’ Competition may be held in each Lok Sabha constituency annually to select the three best innovations for cash awards on the specific request of an MP to promote such a scheme in his/her constituency. (Source: Wikipedia).

The Rajya Sabha Members of Parliament can recommend works in one or more districts in the State from where he/she has been elected. (a) The District Authority shall make the selection of an appropriate Implementing Agency through which a particular work recommended by an MP would be executed;

(Source:  Ministry of Statistics and Programme Implementation, Govt. of India and MPLADS Guidelines 2016)

What do our MPs do with the funds they have been given to spend on their constituencies?
(Source:  Samarth Bansal,  The Hindu, New Delhi Updated:  September 01, 2016)

Every year, MPs are allotted Rs. 5 crore under the MPLAD (Member of Parliament Local Area Development) Scheme, primarily to take up development projects in their respective constituencies. The fund has been increased over time, starting from Rs. 5 lakh in 1993-94 to Rs. 5 crore at present.

As per the data provided by Ministry of Statistics and Programme Implementation (MoSPI), only 5.4% of the total fund has been utilised for the Financial Year 2014-15. What does this mean?

How does the MPLADS work? The data shows that not a single rupee was spent in 278 constituencies (51 per cent) in 2014-15. Of these, 223 MPs did not recommend any amount. Considering that MPs have a recommendatory role in the scheme, it is surprising to see that 41 per cent of them haven’t even recommended any amount for their constituency. In the remaining 55 constituencies, the MP recommended works but no money was spent by the district authority. In all, the average amount of recommendations made was worth Rs. 2.16 crore, while the average expenditure incurred was mere Rs. 57 lakh.

However, it must be noted that the funds for a particular year can be carried forward for utilisation in subsequent years. Some development projects might cost more than the allocated amount of Rs. 5 crore, which might be one reason for low utilisation of MPLADS funds for the first year in some constituencies.

Among states, MPs of Kerala have the best numbers on the recommendation front, with projects worth Rs. 7.3 crore recommended on average. (The amount might exceed Rs. 5 crore as Financial Year 2015-16 has begun.) However, the actual amount spent in these Kerala MPs’ constituencies is just Rs. 47 lakh, which is below the national average.

Overall, Tamil Nadu and West Bengal are the best performing States. Both have average recommendations worth Rs. 3.5 crore, and are the only two big States having spent more than Rs. 1 crore per constituency on projects. On the other hand, Jharkhand, Uttarakhand, Jammu & Kashmir, Rajasthan and Assam, on average, don’t even cross the Rs. 1 crore-mark for project recommendations, let aside the execution.

Among the major political parties (having more than 10 members in Parliament), MPs of All India Trinamool Congress (TMC) and All India Anna Dravida Munnetra Kazhagam (AIADMK) outperform others. It is interesting to see that TMC and AIADMK are in majority in their States — West Bengal and Tamil Nadu respectively. This however, is not true in general. For instance, Biju Janta Dal (BJD) enjoys the same privilege in Odisha. But the average expenditure of the State’s MPs, the majority of whom belong to the BJD, lies way below the national average.

"Towards the goal of Swachh Bharat, the District Authorities have been emphasized upon to ensure requisite number of toilets whenever any infrastructure for schools / educational institutions is constructed under the MPLADS. Installation of rain water harvesting systems (both  for water storage and ground water recharging) in Government buildings and public places like schools, colleges, hospitals, community halls, water-bodies, etc have been made permissible.  Construction of shelters for imparting training for skill development has been included in the list of eligible works. In the wake of Accessible India Campaign (Sugamya Bharat Abhiyan), it has been  decided that the assets created under the MPLADS may be made friendly to persons with disabilities, wherever feasible."