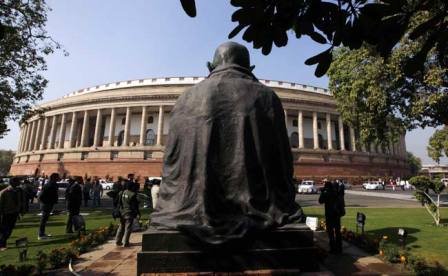 Mahatma Gandhi watches as MPs recommend their own increment

(Note: The other day NDTV news channel showed that a panel of MPs has recommended 100% raise in MPs basic salary and allowances and the Government was waiting for the Prime Minister Narendra Modi's nod.  Their justification this raise has been mooted after six years. What a cruel joke!  In 2011 the Planning Commission of UPA II headed by the economist

Manmohan Singh, defined Poverty Line with the cut-off mark of per capita expenditure of Rs 32 per day in urban areas and Rs 26 in rural areas. Can Manmohan Singh or Sonia Gandhi or for that matter any MP live on Rs 32 per day when pulses alone are touching Rs 200/- per kg?  All the MPs across all party lines (on this there is total symphony – no animosity, no holding up of the parliament for days on end!) are waiting eagerly in one chorus for a double payhike of Rs 2.80 Lac per month in basic pay – add to this other allowances like furniture and secretarial allowance! On the contrary just take a look at the dichotomy and utter hypocrisy of defining Poverty Line. Why don't the MPs instead of clamouring for exorbitant hike, live at Rs 32/- allowance per day?  Also did the Electorate give them the authority (the so called Committee to look into MP payhike) to recommend increase in their own salaries?  Was it mentioned in their Election Manifesto? Look at the irony.  The Joint Committee, is headed by none other than the controversial BJP MP Yogi Adityanath!  What does a self-professed yogi have to do on the Joint Committee on Salaries and Allowances of Members of Parliament?  Until and unless he has turned into a Bhogi who recommended that an MP will get (lifetime?) enhanced pension per month.  So if an MP serves only one term, he or she will continue getting life time pension @ Rs 35,000/- per month!  This might also include those MPs who do not serve their full term (Navjot Singh Siddhu).

The Electorate voted their representatives to the seat of power to SERVE THE PEOPLE AND TO SEE TO THE `COMMON GOOD' (which our Pope repeatedly drums into the head of our Cardinals, Bishops and Parish Priests) and certainly not to recommend increasing their own pay at the taxpayers' expense.  Like the private sector, MPs who most of the time bring the parliament to a standstill for days, pay hike should be performance-based, and recommended by a non-political very well-reputed, accredited HRD organisation / management consultancy firms as is done by BOSE, US-based World's topmost electronic brand and other most world-renowned organisations  – Isaac Gomes).

3. MPs gearing up to clear raise in this Parliament session

The nearly 800 members of Parliament are within finishing line of a 100% raise with their basic pay jumping from Rs. 50,000 to a lakh a month.

Prime Minister Narendra Modi has to decide whether to sign off on the new salaries and allowances recommended first by a committee of MPs, and now sanctioned by a group of ministers and submitted to the Cabinet.

If PM Modi sanctions the changes, Parliament is likely to clear the proposal in this session, which began today and ends on August 5. The new salaries will be effective from April 1.

The monthly salary for an MP will double to a lakh. Other 100% fillips:  the constituency allowance, meant to facilitate the lawmaker's travel and other expenses in covering his constituency will shoot up to Rs. 90,000 a month, ditto for the salaries of office staff of MPs.

An annual furniture allowance for MPs' official homes will double to 1,50,000  a year and free broadband worth Rs. 1,700 per month  will be provided at parliamentarians' official homes in their constituencies.

The basic compensation for a lawmaker will climb from Rs. 1,90,000 per month to 2,80,000 (salary along with constituency and office staff allowances).

India's parliamentarians last had their salaries revised six years ago.

Some lawmakers agree with critics who feel lawmakers should not have the right to grant themselves increments.

"I am against this increase. We are working here for the service of the people, and what we get is sufficient," said Prasun Benerjee of the Trinamool Congress.  "We are clear the increase should not be decided by us, but an independent body," said M Rajesh of the CPM.

But for the most part, lawmakers are concordant on whether the new salaries are warranted, particularly because just weeks ago, the government cleared a nearly 25% raise for bureaucrats, with the new parameters offering better entry-level salaries than the private sector.

"Government salaries have been increased, MPs' salaries should be increased too ," said Jagdambika Pal of the ruling BJP, while K Ranmohan Naidu of the Telugu Desam Party is convinced  "This will end corruption with a proper salary."

The parliamentary panel, headed by BJP MP Yogi Adityanath, had also suggested raising the pension of MPs from Rs 20,000 to Rs 30,000. However, the parliamentary affairs ministry had turned down several of its recommendations, including raise in daily allowance from Rs 2,000 to Rs 5,000. The ministry has rejected nearly 75% of the 60 proposals made by the panel on perks and allowances, including providing canteen facilities on the lines of defence personnel, fourth of travel fare as incidentals, former MPs to be entitled to diplomatic passport and having access to VIP lounges at airports, the word "spouse" to be replaced with "companion" to accompany MPs in AC First Class train travel, increasing free air tickets between sessions for MPs from 34 to 43 and travel allowance during sessions.

At present, revision in salaries and pensions of MPs is done through a legislation while perks and other allowances can be changed through a notification.

Reportedly the PMO is against lawmakers' salary hike by the MPs, for the MPs.  Prime Minister Modi favoured the salaries of lawmakers being linked to a certain post, instead of bringing a bill each time to be passed by MPs themselves, the sources said. While this has been Modi's view, the PMO was yet to give a formal opinion on the recent proposal for a 100% increase in MPs salaries. The last word was yet to be said on the recommendations, they said.  Let us hope good sense and King Solomon's wisdom dawns on our Prime Minister.  – Isaac Gomes