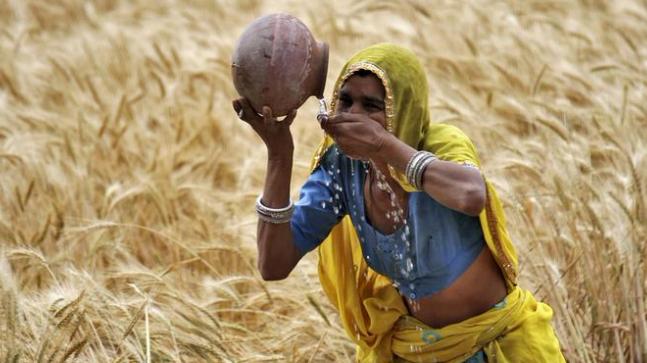 Much has been said about agrarian distress but focusing on women farmers can be the key to improving agriculture productivity. The Economic Survey 2018 says that with more men migrating from rural to urban centres, there is now a "feminisation of agriculture sector". Isn't it added pressure on the rural  womenfolk who bear children, bring them up and do regular household chores? Men are migrating to urban centres,  not because they do not like to carry on with agriculture but because with increasing cost of inputs and low return on investment, agriculture is becoming unremunerative. Remember our President's Republic Day eve speech "We need to further improve the lives of our hardworking farmers. Like mothers, they toil to feed more than a billion of us".  This suggested role reversal is not going to address the root cause of the plight of farmers. Nor will it necessarily empower women. It will only expose them to more heat and dust. Isaac Gomes, Asso. Editor, Church Citizens' Voice.

The percentage of operational land holdings owned by women have gone up from 10.8 per cent in 2000-01 to 12.8 per cent in 2010-11. While the overall number reflects the prevalent gender disparity in land ownership, more women now own marginal and small holdings.

With women taking on more proactive roles in agriculture, they need better access to resources such as land, credit, water, technology and training. "The entitlements of women farmers will be the key to improve agriculture productivity," says the Economic Survey.

WHAT THE GOVERNMENT HAS DONE TO HELP WOMEN FARMERS

Earmarking at least 30 per cent of the budget allocation for women beneficiaries in all ongoing schemes or programmes and development activities.

Focusing on women self-help group (SHG) to connect them to micro-credit through capacity building activities and to provide information and ensuring their representation in different decision-making bodies.

Recognising the critical role of women in agriculture, the Ministry of Agriculture and Farmers Welfare has declared October 15 every year as Women Farmer's Day.

In addition to the initiatives taken by the government, the Economic Survey pitches an "inclusive transformative agricultural policy" that should aim at "gender-specific interventions to raise productivity of small farm holdings".

Women are involved at all levels of agriculture, be it production, pre-harvest processing to packaging and marketing. The Economic Survey, therefore, says it is important that women are treated as "active agents" in rural transformation.

Will the Budget 2018 have something for women farmers?