Mother or a prostitute? In this ‘mother of democracy’, lives don’t matter! – Kapil Sibal 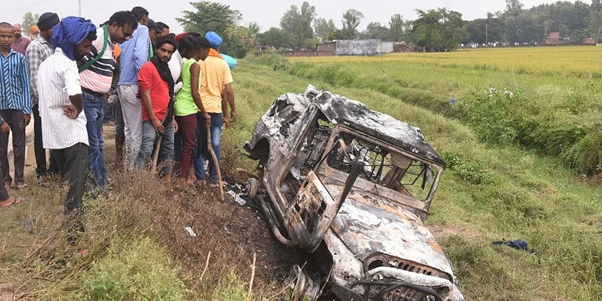 The Lakhimpur Kheri incident shows not only scant regard for rule of law but also arrogance of the perpetrators. What is even more disturbing is the silence of the powerful.

Villagers watch a burnt car which ran over and killed farmers on Sunday, at Tikonia village in Lakhimpur Kheri, Uttar Pradesh. (Photo | AP)

Writer Kapil Sibal is not a common run of politicians, but  a senior lawyer, Congress leader and member of Rajya Sabha. Mark his concluding sentence in this article:

“Like many of his other promises, the prime minister has failed to rise to the occasion in publicly castigating those directly and indirectly involved in propagating the cult of violence. In this 'mother of democracy' lives don't matter!”

Is ours then 'mother of democracy' or its opposite, a Prostitute? That is the tantalising question, that bothers my mind. Please throw your light to get out of my confusion! james kottoor, editor World Citizens’ Voice.

The prime minister, in his address to the United Nations General Assembly, referred to our country as the 'mother of democracy'. These words ring hollow given the scale of violence fuelled by heart-rending incidents of intolerance that our political system breeds and the rampant lust for power. The genesis is the unfurling of divisive political agendas. They in turn feed into the psyche of dominant cultural mindsets that demand obedience. Any attempt to resist is met with brutal responses.

We live in a state where those who rule are bereft of empathy, act with impunity and ensure that the system manipulates the desired outcomes. Leaders who owe allegiance to the Constitution along with 'Andh Bhakts' who are the votaries of this establishment are at the forefront of this brutality that evokes both fear and disgust. It is difficult to imagine the 'mother of democracy' witnessing the mowing down of our farmers by a cavalcade associated with the Union minister of state for home affairs. The Lakhimpur Kheri incident shows not only scant regard for rule of law but also arrogance of the perpetrators. What is even more disturbing is the silence of the powerful.

When Hindu temples and Durga Puja pandals were attacked in Bangladesh, Prime Minister Sheikh Hasina did not hesitate to condemn the violence and said "the perpetrators of this heinous act will be hunted down". Yet, not a word from the prime minister and the Union home minister on the inhuman act in Lakhimpur Kheri.

Instead, the investigating agencies, despite an FIR, chose not to act until the Supreme Court took suo-motu cognisance and asked the state government, "Will an accused in every part of the country be treated in the same way like the present case?" This, at last, nudged the police to act and arrest the son of the Union minister of state for home, who incidentally, a few days before this incident, when shown black flags by protesting farmers, openly threatened them by stating: "Sudhar jaao, nahin toh sudhaar denge. Doh minute lagenge kewal" (Mend your ways, or else, we will mend you. It will only take minutes).

This is not a solitary incident. On 15 October 2021, a speeding car ploughed through a procession on its way to immerse the Durga idol in Jashpur, Chhattisgarh. One man was killed and 17 others critically injured. On the same day, a 35-year-old man, Lakhbir Singh, with no criminal history was brutally murdered, his hands chopped off and his body found hanging from a police barricade at the farmers' protest site at the Singhu border.

In the recent past in Unnao (2018) and in Balia (2021), we saw how the police sought to protect the powerful by launching cases against the rape victims rather than the accused, one being an MP and another an MLA. The hurried cremation of the rape victim's body by the police in the Hathras gang-rape and murder case (2020) is a commentary on the complicity of agencies in destroying evidence to help the accused. Ranjit Bahadur Srivastava, a BJP leader from Barabanki in Uttar Pradesh, called the Hathras victim awaara (wayward) and said, "I can say with guarantee these boys are innocent." Kathua (2018), a gruesome tale of rape and murder of a young girl, provided yet another example of the BJP seeking to defend the accused with the formation of the Hindu Ekata Manch and two ministers of the party in the state government publicly proclaimed their innocence.

When a minister in the course of a rally can exhort the crowd by saying "…goli maro…" (shoot to kill), urging the crowd to avenge and thereby widen the communal divide, it may serve partisan political outcomes but tear asunder the foundation of our Republic.

The Muzaffarnagar riots (2013) resulted in 60 deaths and displacement of 40,000 people. The SIT could not file a chargesheet in 20 cases for lack of sanction for prosecution and the UP government further decided to withdraw 77 cases relating to the riots. Prominent BJP leaders were given clean chits even without trial despite video footage of them inciting the crowd with communal speeches just before the riots. In the Delhi riots (February 2020), the allegedly biased investigation agency seeks to protect the accused while prosecuting protesting students.

I wish to remind the prime minister of his promise in 2014 when he stated: "No accused (with criminal charges) will dare to fight polls. Who says that this cleansing cannot happen? I have come to cleanse politics." He went on to say, "We have to do away with criminalisation of politics, and delivering more lectures won't help." In yet another speech, he said, "Parliament se apraadhi saaf karne padenge… main aaya to inhe nahi chhodunga…chaahe BJP ya NDA ke kyun na hon" (We need to rid Parliament of criminals… I won't let them off the hook if I'm elected to power… even if a member is from the BJP or the NDA).

Contrary to this, a study by the Association for Democratic Reforms (ADR) in April 2018 revealed that of the 33% of MPs/MLAs with declared criminal cases related to crime against women, the BJP had the highest number of such lawmakers.

Like many of his other promises, the prime minister has failed to rise to the occasion in publicly castigating those directly and indirectly involved in propagating the cult of violence. In this 'mother of democracy' lives don't matter!

(The writer is a senior lawyer, Congress leader and member of Rajya Sabha. He can be contacted on Twitter: @KapilSibal)