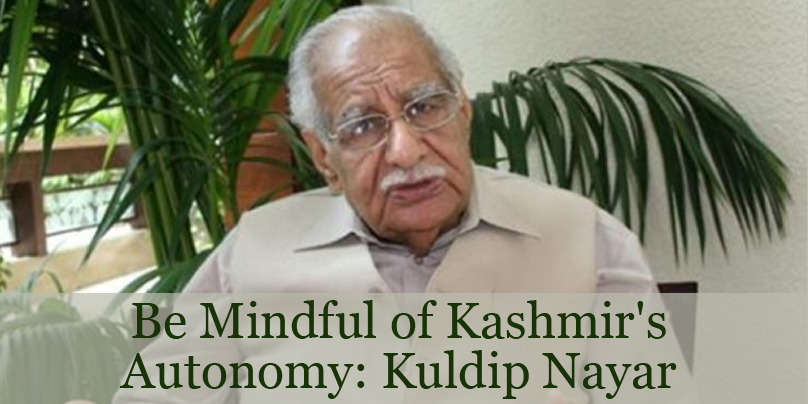 (Note:  The writer is a renowned syndicated columnist, a former member of India’s Rajya Sabha and ex-High Commissioner of India to the United Kingdom. Being a very balanced veteran journalist, his observations are worth reflecting on.

India and Pakistan are like twins envious, jealous or fighting over petty things which they exhibit even in their relations with other countries. For other countries both are just market places to sell or dump their goods and services and so they don’t take sides in this petty politics. Since one cannot choose one’s neighbour, wisdom demands both  India and Pakistan  learn to get along well avoiding all bickering.

For the US production of war weapons is their biggest industry. So fight between India and Pakistan can only make US happy, as it can sell more weapons to both, like some doctors pray that there may be many sick people to boost their income by serving them.

If Modi succeeded to get Trump take a public anti-Pakistan stand it is also because of the friendship he built up through the Chicago based Shalabh Kumar, Trump's favourite “Hindu”  and billionaire doner to presidential campaign. CCV published article and joint photos of Trump, Kumar and Modi predating Trump election. So Modi had done all the ground work long, long ago, to get Trump say that India is his best friend. May it stay that way for the benefit, not only for US but at least equally for India. james kottoor, editor).

Every statement or a visit by a foreign dignitary has to be related to our attitude on Pakistan. Even if there is no mention of Islamabad, we stretch the observation to the point where it is meant to be so.

American presidents have so far been hedging an open criticism of Pakistan because the US has been supplying arms to Islamabad. But for the first time, America has dropped ifs and buts to pull up Pakistan for abetting terrorism and giving shelter to militants.

President Donald Trump in a joint statement with Prime Minister Narendra Modi, following their first meeting at the White House, made terrorism the cornerstone of mutual cooperation between the two countries. The statement went beyond the usual American position, while criticising Pakistan it echoed Indian concerns regarding the China-led Belt and Road Initiative.

President Trump, recalling his election campaign, said that he had pledged true friendship with India. “I pledged that if elected, India would have a true friend in the White House. And that is now exactly what you have, a true friend… I am thrilled to salute you, Prime Minister Modi and the Indian people for all that you are accomplishing together. Your accomplishments have been vast.” The president also described Prime Minister Modi and himself as “world leaders in social media” and that it has enabled them to directly hear from their citizens.

In the past, India had friendly presidents in John F Kennedy, Bill Clinton and Barack Obama. But they did very little to help Delhi in its strategic and development requirements. They were obsessed with the thought that they should not in any way rub Pakistan on the wrong side. Delhi never wanted them to do anything which would mean a tilt towards it.

But President Trump has departed from the past American policy. The resolve of the two countries to strengthen anti-terror cooperation has come as a big diplomatic win for Delhi and a big blow for Islamabad which was trying to portray the Hizbul militants as “freedom fighters.”

In his individual remark, President Trump said, “the security partnership between the US and India is incredibly important. Both our nations have been struck by the evils of terrorism and we are both determined to destroy terrorist organisations and the radical ideology that drives them. We will destroy radical Islamic terrorism.”

The two leaders seem to have forged a lasting friendship that President Trump himself took Modi on a guided tour of the White House besides accepting the Indian Prime Minister’s invitation to send his daughter, Ivanka, to India for a meeting. All these augur well. On his part Modi, with President Trump standing beside him, declared that America was India’s primary partner for “its social and economic transformation.”

China is the first one to react. It has chided India for going to the American camp. And, as usual, America has encouraged Pakistan to stay with Beijing. Islamabad has understandably stayed quiet. Although President Trump has hinted that the supply of arms to Pakistan might stop, the latter has not uttered a word. Probably, it is waiting for the outcome of the meeting between President Trump and Prime Minister Nawaz Sharif.

The Congress has made no comment which would be construed as criticism of the Modi-Trump meeting. The American president’s criticism of Pakistan is to the liking of the party but it cautiously awaits overall reaction in the country. The Congress, like other parties, is busy with the presidential election in India. However, the personal equation between Trump and Modi would not be to the liking of Congress president Sonia Gandhi.

In the US State Department, the Congress does not have that kind of a priority which it had earlier. In the forthcoming presidential election in India, Modi looks like having an upper hand. Therefore, all American policies are being shaped presuming that the BJP would once again win the general election in 2019. The support that Modi has in India at present indicates that the opposition is no match for him. Were all non-BJP parties to come together and fight the next election, they might emerge as a formidable group.

The effort which Bihar Chief Minister Nitish Kumar is making gives some hope. Otherwise, the performance of the opposition would be dismal. The demonetisation that the Modi government introduced had some adverse effect on the people initially but it is slowly fading away. However, the GST which is coming into force from July 1st could sting the government badly.

It looks as if someone must have briefed President Trump on these points. Otherwise, he would not have tilted towards the BJP as he did openly after his first meeting with Modi. The prime minister continued to woo the Indian diaspora and the CEOs from Apple, Amazon and Walmart to invest largely in the country. They are more inclined than ever before to do business with India. Probably, the State Department, too, encouraged them, taking the cue from President Trump.

On his first meeting with the US president, Modi played the Trump card cleverly. With his party already well entrenched in India and spreading its wings in the rest of the states, what Modi required was some foreign support. None could have been better than America’s, particularly at a time when China has openly sided with Pakistan and trumped up some incidents in the northeast to allege that India had occupied some of the disputed territory.