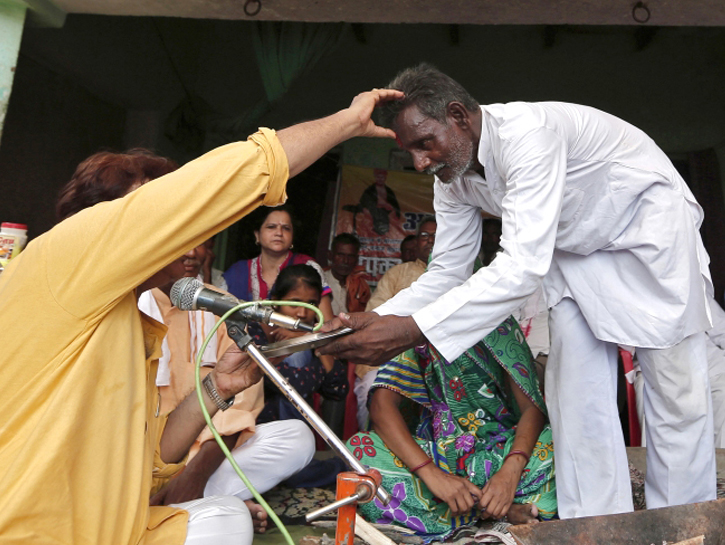 The Irony of Home-coming

“Every year we will reconvert one lakh Muslims and Christians into Hinduism,” thunders Dharam Jagaran Samity, a Hindutva outfit. “We have plans to root out Christianity and Islam from India by December 31, 2021,” claims a maverick Sangh Parivar leader. The ongoing ‘ghar vapsi’ or reconversion programmes across the length and breadth of the country should be seen in the background of such pronouncements. The protagonists of ghar vapsi claim that they are helping those strayed away from Hinduism to come back to their original home. This argument flies in the face of Article 25 which entitles a person to freedom of conscience and the right to freely profess, practise and propagate religion. It is outrageous to state that professing and practising a religion other than Hinduism is going astray. It also implies that Hinduism is the only right religion and people are not supposed to leave it at any cost. Restricting religious liberty is unconstitutional and irreligious.

There are several other flaws in the Sangh Parivar argument. They profess that they are against conversion. They want anti-conversion laws. But they indulge in the same act which they oppose when they convert people from other religions to Hinduism. Favouring conversion to one religion and opposing the same to other religions is nothing but repressive majoritarianism and an affront to minority religions. Such highhandedness has no place in a democracy which believes in rule of law.

The contention that conversion to Islam and Christianity is due to allurements and incentives has fallen flat with the recent developments. Those who were reconverted to Hinduism in Agra in Uttar Pradesh had admitted that they were lured by extraneous factors like promises on Aadhaar and Below Poverty Line (BPL) cards. This blatant offer of incentives became more evident when some leaders of the Sangh Parivar stated that Dalits who reconvert to Hinduism will have the choice to decide their caste. This nonsensical offer means that a Scheduled Caste person after reconverting to Hinduism can become a Brahmin. But this contradicts the very core and soul of caste system in Hinduism. Ironically, such announcements have come from leaders of Sangh Parivar outfits and not from Hindu religious leaders.

The vociferous demand for a national anti-conversion law is fraught with dangers. First of all, there is no need for a special law to deal with forcible conversion as there are provisions in the penal code which can very well deal with such crimes. Secondly, in States where anti-conversion law is in force, not many cases have been filed under it; nor many convictions have taken place, implying that hardly any conversion takes place which subverts the law. However, such laws can create impediments when someone genuinely wants to opt for a religion of his/her choice. The formalities for conversion under the anti-conversion law are cumbersome. This is what the Sangh Parivar wants across the country – prevent people from exercising their fundamental right to profess, practice and propagate the religion.