All Modi-reforms counter productive? Note ban has cost us a lot! 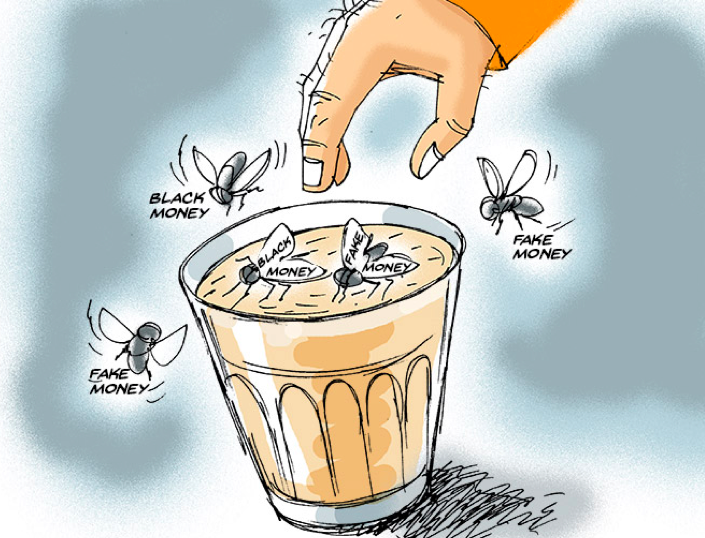 Well, then, what did DeMo achieve? As predicted by most economists, the volume of transactions fell, economic activity was adversely impacted, and some sectors (which were more dependent on cash transactions) witnessed greater disruption than others, says former Trai chairman Rahul Khullar.

(Note: The initial promise of Modi Sarkar was that he was on a bold reform program to usher in an era of “Acche Din” starting with the deposit of Rs. 14 lakhs to every one’s account from the black money brought back instantly from abroad, then to provide jobs for all and reduction of daily living expenses etc. Now with the introduction of GST a major reform, cost of items for daily living has doubled and there is a hue and cry and strikes and protest across the nation.

The writer of the article Rahul Khullar analyses the gains and losses of demonitisation (its shorted form: DeMO) with facts and figures which may be compared with your own data or any other available. DeMO was meant to stop flow of black money and printing of fake money(counterfeiting) which it has not succeeded.

Instead it has seriously disrupted normal economic activity and slowed down growth; it has not stopped black money held as cash; it has brought down GDP as seen in the last three years;  it has led Construction sector to a virtual collapse; it has slowed down service and manufacturing sectors; it has produced steep fall in farm crops, handled through cash transactions, causing the high rise of farmers’ suicide; it has made prices of daily items to shoot up.

In short things are going from bad to worse in the country causing communal conflict  leading to shocking increase in rape and murder due also to other reasons. This should force both government and people to change course to arrest reforms that are counter productive. james kottoor, editor)

Demonetisation, or DeMo, is back in the news. And, it’s not good news. In an article written in 2016 (The pain of demonetisation was not justified), I had argued that: total transactions would contract; economic activity would be seriously disrupted; there would be lag effects; and the disruption will continue into the first quarter of 2017-18 (and probably beyond that).

It is time to take stock of what DeMo did not achieve, what it did and its continuing impact.

First off, DeMo neither stopped the flow of black income nor the acquisition of black wealth. Since it did not address these problems, understandably, it had no impact.Result: After January 1, 2017, it is back to business as usual.

Second, it did not stop counterfeiting. Since the Reserve Bank of India (RBI) is still counting the money that came in, there are no official figures for fake notes. But, estimates are that they were a minuscule percentage. Any way, counterfeiters are back in business. Bottom line: The objective of killing the fake note industry (used to finance terrorism) was not realised.

Third, the most important objective of DeMo was to render worthless the black wealth held as cash assets, ie, in currency. Owners of such black currency would not be able to declare it and this amount would be worthless paper. The government expected that a large amount would not return to the system. This too was not realised.

Well, then, what did DeMo achieve? As predicted by most economists, the volume of transactions fell, economic activity was adversely impacted, and some sectors (which were more dependent on cash transactions) witnessed greater disruption than others.

The ministry of statistics and programme implementation (MoSPI) recently released official figures clearly show that there was: A slowdown in the annual growth rate of gross domestic product (GDP); in terms of gross value added, the deceleration in growth is larger.

There was a contraction in the last quarter’s growth rate by over 3 percentage points when compared to the fourth quarter in 2015-16. Clearly, economic activity was adversely impacted by DeMo.The MoSPI numbers also confirm a number of “speculations”. Construction sector saw a virtual collapse.

Manufacturing slowed down. Services sector saw a slowdown (except for public administration, etc). And, all this when the data does not accurately capture what is happening in the informal sector (in manufacturing and services). Private final consumption expenditure as a share of GDP declined in the last quarter.The same is true of gross fixed capital formation. DeMo reduced consumption and investment demand.

As is now evident, the agriculture sector — highly dependent on cash transactions — has borne a huge burden. Harish Damodaran (writing in The Indian Express) shows that prices of a number of crops have fallen significantly and that the simultaneous fall of prices of some products is unprecedented.

This post-harvest disaster is an outcome of DeMo; cash-based transactions/contracts could not be concluded.So, two years of drought have been followed by a good harvest but poor price realisation, viz, three years of depressed incomes. The agricultural distress has spawned a flurry of loan waivers (with more to come) by state governments.

It is far from clear that states have the capacity to bear the fiscal burden. Cashless transactions did indeed pick up after DeMo. But, going cashless happened only for those with access to a digital system.And, after remonetisation it is back to cash. In any event, we did not need DeMo to promote digital payments.

What lies ahead? The sharp fall in rural incomes implies no pick-up in rural demand at least for the first two quarters of 2017-18. And, if construction and other informal sector activity does not revive (as looks likely), the prospects for consumption demand are gloomy. The excess capacity problem, therefore, continues.

The decline in the share of investment expenditure must be reversed. But, slow expansion of consumption demand does not augur well for a pick up in investment. Here, too, there is no good news for the first two quarters.

Agriculture now poses other risks. If the crash in prices induces a cutback in kharif sowing of certain crops (pulses), be ready for a spike in prices in the third quarter.And, that can re-start food inflation.Loan waivers imply a cutback in public investment by states.

Moreover, waivers take time to work out, sometimes more than a year. So, do not expect an immediate revival of rural demand. However, fiscal liabilities are apparent immediately.Moral hazard for lending will only compound the already serious non-performing assets problem.This will surely influence RBI’s monetary policy stance.

All in all, DeMo has cost us a lot. And, if that was not enough, we now have the attendant risks of the goods and services tax roll-out and the clean-up of the public sector balance sheets. So, keep your fingers crossed.

Writing in December 2016, I had concluded thus: 'How much time is it going to take to put the economy back on the rails? There will be lag effects. Rational expectations will have to be reversed. The revival of investment may be staggered into 2018… in the ministry of finance, senior management ought to be looking at more serious issues than ‘digitally cashless’ India.' Today: Some even more serious issues have come their way.