Modi must have learnt of damage to his credibility, says Govindacharya 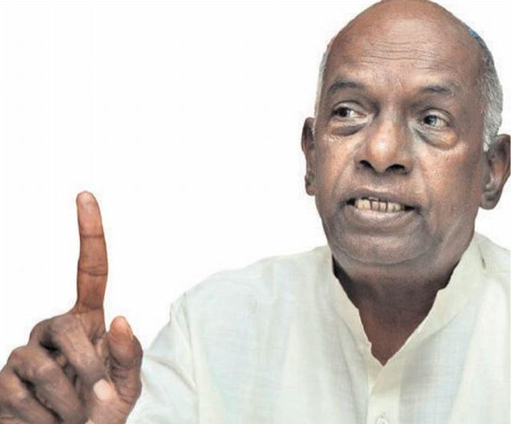 Govt. has no values: RSS leader

Modi must have learnt of damage to his credibility, says Govindacharya Smita Gupta,

(Note: Silence, prolonged and profound on the part of  Modi Government and top ministers targeted or attacked is ominously ill-foreboding. Why no one answers RSS ideologue’s charges, let alone those of outsiders?  jk)

The Modi government’s support to Ministers accused of acts, ranging from corruption to impropriety, “speaks of the political dishonesty of the establishment,” RSS ideologue – and former BJP general secretary — K.N. Govindacharya told The Hindu on Tuesday.

This is “a power-centric, not people-centric government in which issues and values have been given a goodbye,” he said in a wide-ranging interview.

To a question on whether the refusal to sack the four Ministers, two of whom were involved in the so-called Lalitgate, was at odds with the fact that one of the key issues on which the BJP came to power was the many financial scandals of the UPA government, Mr. Govindacharya said, “When the Home Minister responds to a demand for resignations of Ministers saying that would be fitting for the UPA but not the NDA, people draw their own conclusions.”

The people, he said, “are driven by morality, not legalities… the message in faraway villages is that something wrong has been committed by those who spoke of zero tolerance for corruption. People understand the concept of a quid pro quo. The perception is that influential and powerful people oblige each other – and this message has also gone down to the party’s own MPs, MLAs and panchayat members.”

How would the BJP deal with a belligerent Opposition? “Narendra Modi is an intelligent, knowledgeable person and must have understood the extent of damage to his credibility,” Mr. Govindacharya said. “I hope political sense will prevail before Parliament resumes… Electoral defeats and successes are just a passing phase but goodwill and credibility among the people needs to be safeguarded.”

BJP insiders said that if the Ministers are sacked, it would weaken the government and, in Rajasthan, where Chief Minister Vasundhara Raje had threatened to pull down the government, it might result in the loss of a government.

Did Mr. Govindacharya agree? “No, I don’t. Narendra Modi is head and shoulders above everyone in his party… He should be intelligent enough to forsake one State government rather than allow a scratch on his credibility.”

Responding to the many voices of dissent heard in recent days – whether BJP MP Kirti Azad or indeed, former Finance Minister Yashwant Sinha – he said, “There is a heavy dialogue and trust deficit within the party which acts against the spirit of teamwork. Lack of participation in decision-making is felt intensely by those who expect themselves to be involved, whether MPs, MLAs or National Executive members. Most of them feel they don’t get an opportunity for an audience with senior leaders, forget participation.”

To a question on the current equation between the RSS and BJP top brass, Mr. Govindacharya said, “The confidence of the RSS in the new regime has been eroded.”

To a question on the current equation between the RSS and BJP top brass, former BJP general secretary K.N. Govindacharya told The Hindu on Tuesday, “Since the mandate is for five years, the RSS is holding its breath – the organisation worked very hard for it, [helping to establish] for the first time since Independence, a non-Congress government with a majority at the Centre. The RSS has a lot at stake but its confidence in the new regime has been eroded after the latter’s performance in its first year.”

He said the RSS, is “dejected”, and its “disenchantment” is finding expression in the opposition, for instance, to the controversial Land Bill with Sangh-affiliates such as the Swadeshi Jagran Manch, Bharatiya Kisan Manch, etc. speaking out against it. “Top RSS leaders to whom the top BJP leadership has spoken [about this causing embarrassment] have been told to speak to the outfits directly, maybe they have some points that should be heard.”

On the recent Land Boundary Agreement signed with Bangladesh that involved exchange of territories and populations with contiguous areas in India, he said: “The matter could have been postponed… in the exchange, Assam got more people, less land. This could have been balanced by raising the issue of two crore infiltrators with Bangladesh. But the BJP appears to have dropped the issue of infiltrators. It is a case of political expediency rather than ideological conviction and that has de-motivated BJP/Sangh cadres.”

Of the upcoming Assembly polls in Bihar – that was his karmabhoomi for many years, especially during the JP movement — he said, “With no name being announced as CM candidate, BJP leaders in Bihar may end up working at cross purposes. Unleashing of factionalism in the name of caste will cause conflicts from selection of candidates to campaigning and financing. But since both the BJP and the Nitish Kumar-Lalu Prasad Yadav sides have negatives, they are evenly poised.”