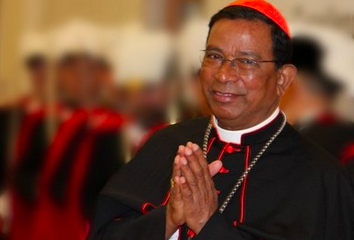 He highlighted the need for government action to protect Christians and vulnerable religious minorities in India.

Prime Minister, Narendra Modi, has failed to keep his promise on action to protect Christians under increasing threat from extremist violence, Cardinal Telesphore Toppo has said.

Speaking to Aid to the Church in Need, Cardinal Toppo, also the Archbishop of Ranchi, highlighted the need for government action to protect Christians and vulnerable religious minorities in India amid a rise in attacks by Hindu radicals.

"They have not come out to protect and defend. The Prime Minister has only once spoken in defense of the constitution and he promised to protect the Christians and other minorities. But that was only a promise," he said.

However, he said that Modi's speech gave some "assurance" of the government's commitment to tackling violence and other extremism against Christians.

Reports, including the latest US Commission on International Religious Freedom released in late April, have described a marked rise in anti-Christian violence, and last month there were up to five incidents in one week.

Cardinal Toppo stressed that violence by radical Hindu organisations and the emerging 'homecoming' movement remained a major threat to Christians.

Responding to reports of increased violence and localized attacks by Hindu extremists, the cardinal stressed that the unification of the Church was key to the survival of Christianity in India.

Calling for solidarity amongst Christians worldwide, he said, "I believe that the Church has played an important role, directly or indirectly in keeping India united. Yes, because, although we are of different culture, different language and different parts of India, still we belong to one Catholic Church."

He added "We want solidarity in every respect. Our Church is one. In the same way that there is only one world, it is the same that the Catholic Church is one everywhere."