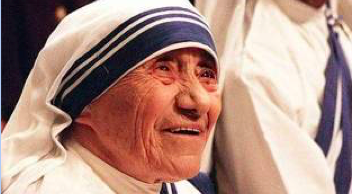 (Note: If Mamata and Modi could attend the Canonization of the Saint of the gutter, it could be a rich tribute  to the ideals of serving the poor, marginalized and suffering by the powerful

political class whose mission is to work for  the common good starting with those most in need. Mamata’s simple life and especially her daily dress —  white sari with a blue border – reminds one of the Saint in contrast to Modi’s costly dress. Gandiji said there is enough and more here  below for every one’s need, not greed. May Mamata and Modi succeed to work together for wiping out destitution in India. james kottoor, editor)

New Delhi: Prime Minister Narendra Modi and West Bengal Chief Minister Mamata Banerjee are among scores of Indian leaders who plan to attend the canonization of Mother Teresa in Rome on September 4.

The prime minister has expressed interest in attending the canonization ceremony of the world’s most renowned nun, who had made India the base for her works among the poorest of the poor, the Malayala Manorama newspaper reported May 21 quoting the Catholic Bishops’ Conference of India.

A delegation from the conference had recently requested the premier to head the Indian team.On May 22, West Bengal Chief Minister Mamata Banerjee too confirmed that she would attend the canonization ceremony. The revered nun had begun serving the downtrodden in late 1940s from Kolkata (formerly Calcutta), capital of the eastern Indian state. She died in the city on September 5, 1997, aged 87. Banerjee’s decision comes in the backdrop of her successful electoral victory in West Bengal, reports india.com.

The news site noted that Banerjee’s attendance at the canonization ceremony would send out a political message at a time when right-wing forces try to project Mother Teresa as an opportunist evangelist, whose only goal was to convert the poor to Christianity. However, the larger secular section of Indian polity and society have criticized the hard-right stalwarts for defaming Mother Teresa and her nearly 40 years of selfless service in India.

By attending the canonization ceremony, Banerjee will not only cement her image as a secular leader and but appeal to Christians across India, the website claims.