MISSING THE SAINT FOR THE MIRACLES 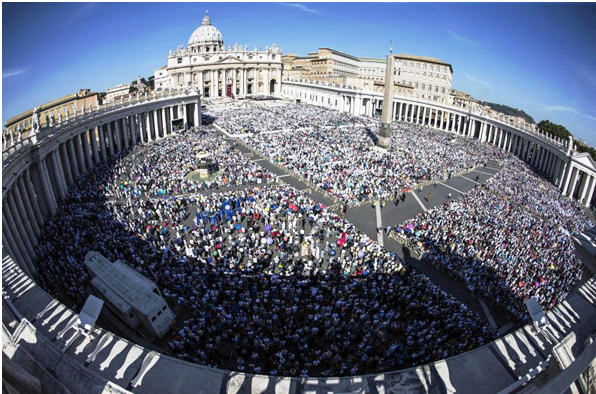 (Note: Chhobebhai needs no introduction.  He is known to the Indian Laity as a very committed Catholic and a prolific writer.  Here is a profound, thought-provoking and fearless article by Chhotebhai – Isaac Gomes)

After watching the canonisation ceremony of Mother Teresa on TV on 4th September, I don’t know whether to yawn with ennui, or bang my fists with angst. I was not particularly enthused about Mother Teresa being declared a Saint, as I believed that, her human shortcomings notwithstanding, she was always a living saint, and did not require any “miracles” to prove it. Her life of total commitment, compassion and service was a miracle in itself.

I first met Mother Teresa in 1967, when my mother had invited her to our hometown, Kanpur. I then spent several hours driving her around town to select a place for her sisters to stay. She has had meals at our home; and when my mother complained to her about me in 1971 she called me over for an hour long tête-à-tête. In 1967 itself I had noticed an intensity in her eyes, while she silently thumbed her rosary beads. She seemed to be in direct communication with the Lord above.

But this piece is not about Mother Teresa per se. It is specific to the canonisation ceremony presided over by Pope Francis at St Peter’s Square at the Vatican. My thoughts flew to two earlier “mega events” connected with her. The first was her State funeral in Kolkata in 1997; and the second was her beatification ceremony by Pope John Paul II, a few years later, at the Vatican. I had seen both on TV, and found a sickeningly familiar pattern.

Her funeral took place just a few days after that of Princess Diana. The latter was a tall young woman who looked even better in short dresses. Her life was cut shorter in a tragic road accident that ended her failed marriage. The British royalty, known for its pageantry, perhaps with a tinge of guilt for having failed its glamorous princess, pulled out all the stops for the funeral, beamed live to millions across the world. a picture of her posing with Mother Teresa. The tall, beautiful young woman on the one hand, and the frail, stooped one covered from head to toe on the other. She was even more beautiful, as in Malcolm Muggeridge’s words “something beautiful for God”. Mother Teresa was more than just beautiful, she was beatific. Yet the State sought to match the pageantry of the British. Unfortunately, the worldly beautiful and the divinely beatific can be contrasted, not compared, nor competed with.

One of the two enduring (not endearing) images from Mother Teresa’s funeral was the gun salute by an army contingent. I felt it totally incongruous to fire a fusillade in honour of a Nobel Peace laureate. The other image was when communion was being distributed. A foreign diplomat pointedly made way for Sonia Gandhi to go ahead of him, but she remained transfixed to her chair. She goes to temples and dargahs, but was loath to receive communion in public. I wondered.

Fast forward now to the beatification by Pope John Paul II. The Pope was not just frail, he was almost immobile, slumped in St Peter’s Chair. He was also inaudible, with slurred speech. It was pathetic. Here was an event that was being attended by over 3 lakh pilgrims, and being watched by millions across the globe. It turned out to be a no-go, no-show missed opportunity.

With a more pragmatic and liberal Pope Francis now in the hot seat, I expected a much more innovative canonisation. It was not to be. It was an encore of a sonorous, sombre ritual in Latin, a dead language. Even the camera work was pathetic. I was watching BBC and an Indian channel in English. Where they were getting the live feed from was anybody’s guess. Other than the occasional panoramic shot of the majestic colonnades of St Peter’s Square, the camera kept panning on the faces of non-entities in the crowd, most of whom were fanning themselves with the booklets to beat the heat.

I had hoped to see something truly catholic (universal) with a spicy Indian flavour. All we got was bland continental fare, minus any flair. I expected to see an Indian dance troupe, like Charles Vaz had once presented before Pope John Paul II. I expected to see some Indian liturgical customs like aarti, and some hymns in Hindi/ Bengali. All we got was one short prayer in Bengali. One of the readings was in Spanish, and a prayer for persecuted Christians was in Chinese (rather indiscreet).

I did not see the camera pan on our Foreign Minister, Shushma Swaraj, who later met the Pope; nor on Mamta Banerjee who reportedly walked in a two-kilometre long procession; nor on Arvind Kejriwal, with or without his cough and muffler! India was muffled and muzzled at the canonisation. As an Indian and as a catholic (universalist) I was sorely disappointed.

Even the commentary was pathetic. Because I know a little Latin and the order of the Mass, I knew what was going on. For the majority of the universe it was a meaningless ritual, like Mother Teresa’s sombre funeral. There was no joi-de-vivre, no spontaneity, nothing. The only digression from the prepared text was Pope Francis saying that he still felt more comfortable with saying Mother Teresa, rather than Saint Teresa. I am on the same page as him on that.

The total lack of creativity was evidenced by the choice of the liturgy, that of the 23rd Sunday of ordinary time! The First reading, from the Book of Wisdom, and the Second from St Paul’s letter to Philemon were totally irrelevant. The Gospel from Luke on the cost of discipleship could easily have been misinterpreted because of the emphasis to hate one’s own, in order to become a true disciple of Jesus. Horrendous. What message were we conveying to the non-Christian world?

As a proud Indian, minus the jingoistic nationalism, I always look forward to watching the Republic Day parade. My eyes well up with tears and my heart swells with joy. What enhances the parade is the lucid running commentary, especially when Rene Simon did it. Imagine watching a cricket, football or tennis match without a competent commentator? If nothing, the Vatican could have hired out of work and party comicator, Navjyot Singh Siddhu! He would have spiced it all up.

Today the medium is the message. Without the medium there is no message. After watching the canonisation the only message that I came away with is that the monolithic Catholic Church seems stuck somewhere in the European Middle Ages. What a wasted opportunity to highlight the work, the mission and the motivation of Mother Teresa. Opportunity doesn’t say “knock, knock, knock”. It only strikes once.

Perhaps this is why commentators kept harping on the two “miracles” that facilitated Mother Teresa’s canonisation. The healed persons were not present, nor their testimonies given. This lent grist to the mill, that how could one go by miracles that could not be scientifically established beyond reasonable doubt? Can we blame them for missing the Saint for the Miracles; as the adage goes, “Don’t miss the wood for the trees”. Do you now understand why I have so much angst about the canonisation? Many others may be sharing similar sentiments, but not knowing how to articulate them.

Among the few Indians that I did spot were Cardinal Oswald Gracias of Mumbai (one of the Pope’s 8 special advisors), Abp Thomas D’souza of Kolkata, who were beside the Pope at the altar, and Cardinal Telesphore Topno from Ranchi. A minor miracle was to spot Bp Patrick Nair, retired bishop of Meerut, now settled in Dehradun. I say miracle because when I first met him about 40 years ago, he told me, with a twinkle in his eye, that he never went to Rome, not even for the mandatory Ad Limina visits. He would perhaps have preferred playing his guitar for the orphans, cycling around the parish, or playing basketball with his seminarians. So what miracle now brought him to roam (pun intended)? The last time that I had met him he told me how he had almost lost his vision in his one good eye. Then some of Mother Teresa’s sisters brought him a swab of cotton that had some blood of Mother Teresa’s on it. It had been picked up from an operation theatre where she had a surgery earlier. Bp Patrick applied this swab to his eye, and Alleluia, he could see again. Maybe Pope Francis should have called Bp Patrick up to the podium to give his testimony.

Miracles and mismanagement apart, Mother Teresa is a Saint in every sense of the word. For me she is an embodiment of Christian virtue, compassion and renunciation. As in the last judgement all that counts is what we did for the least of the brethren (cf Mat 25). I hope not to miss that.

* The writer has been associated with Mother Teresa and her sisters for the last 40 years.