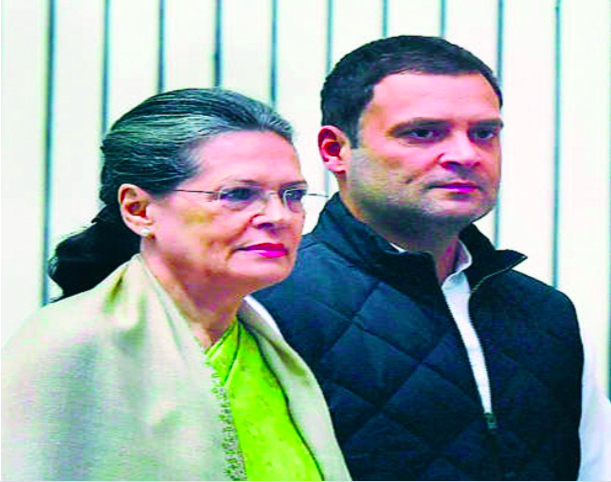 The latest attempts by the Congress to paper over differences raise more questions than these answer.

The following is hard-hitting, plain-speaking opinion piece from the Pioneer! Read it and react, for or against this view. In the final analysis public opinion must be helped to preval.

For that opinions of each one of you have a part to play. So make sure you play your part, instead of blaming the government. “You the people” are the government, the masters in a democracy. The elected politicians are your servants to do your bidding.

For that each of you must speak out, instead of keeping silent. Please don’t succumb to criminal silence and dereliction of your duty, please! james kottoor, editor ccv.

One cannot help wondering what ails India’s ‘grand old party’? Why is it that over four months after the Congress set into motion the process of holding elections for the appointment of a new president, the Congress Working Committee (CWC) on Friday unanimously put off the exercise until June?

Does the Congress not realise that it is rapidly losing political relevance in the country by losing State after State? So now, with the Assembly elections to five States slated for May or earlier, is it not the time for the party to elect a leader who will be able to effectively lead the party into the polls and work out a strategy to reverse its dwindling fortunes?

It is very obvious that Rahul is not interested in being at the helm of affairs despite his mother Sonia Gandhi’s fervent desire to see her son lead it. Though Rahul is rapidly shaping into a politician who frequently raises uncomfortable and relevant questions for the Government and even takes on the Prime Minister, he is a “reluctant politician” who would rather be away from it all instead of right in the middle of a fight at the hustings.

So isn’t it time that the Congress began looking at someone outside the “dynasty” to lead it into the poll battles? However, given that the schedule announced by the party’s working committee will ensure that the new president escapes responsibility for the outcomes of the five Assembly elections, one cannot be blamed for thinking that the mantle might again fall on the Gandhi scion.

Is it that the party does not have faith in the bevy of veteran leaders who are more than capable of steering it on the path of victory and, by extension, political relevance? Or is it that the loyalists would rather run the party into the ground than change guard? Is there so much rivalry in the ‘grand old party’ that the members can’t rise above it and do what is best for the future of the Congress and, by extension, the country?

Everyone knows that for democracy to be relevant, alive and kicking in a country, a strong Opposition is a must to keep the Government on its toes. But all attempts at forging Opposition unity have come to nought till now as senior leaders — like Chandrababu Naidu, Mamata Banerjee, Sharad Pawar and so on — refuse to kowtow to a young and inexperienced leader who has never even been a Chief Minister?

Plus, each of them is more than capable and harbours prime ministerial ambitions. So why would the stalwarts step down for a dynast? The result is a country with a weak and scattered Opposition and no leader tall enough to give an alternative Government at the Centre and occupy the Prime Minister’s chair. It is a shame that at a time when the Congress should be finalising its strategy for the looming Assembly elections, there is infighting over the internal elections and the CWC polls which were last held when Sonia took over as Congress president in 1998.

The Congress obviously needs to put its house in order, both for its sake and for that of the country.