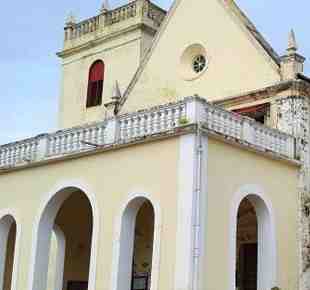 Calangute: Miscreants broke the protective glass of two portraits at the main entrance of St Lawrence Church, Sinquerim, on Tuesday.

The incident came to light on Wednesday morning, when parishioners were on their way home. While the protective glass was broken, the two portraits of the Holy Family and St Lawrence were intact.

Calangute Police, including PSI Videsh Pilgaonkar, rushed to the site and took stock of the situation. While they believed that the work was of an unsound mind, the parishioners believed otherwise. The parishioners also feared for more trouble if the incident was not taken seriously, Goacom reported.

Meanwhile, Calangute MLA Michael Lobo said that the police have registered a case and are investigating the same. He added, “It is unfair to draw premature conclusions