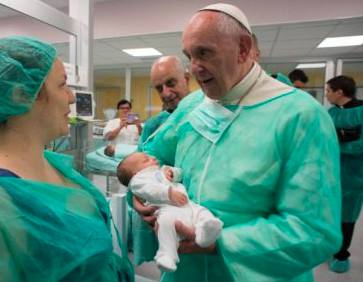 (Note: “Mercy Fridays” every month is another matchless surprise example this 79 year old Pontiff does in following the footsteps of Jesus who went about doing good to the needy and suffering. This month it was to the newly borne terminally ill children’s Hospice dressed as a nurse. Recall the saying in picture form: “To the hungry, God appears in the form of Bread!” To the helpless babe he does it clad as a nurse. If this 79 year old does it regularly who among us  can say:”I can’t!”

In previous months it was to a drug and alcohol rehab Centre, a prostitute rehab centre, an elderly home, retired priests centre, home of refugees seeking asylum, home of dying in vegetative life, he visited. Like Jesus he takes upon himself vicariously the  miseries of humanity while the rest of humanity runs after the comforts and luxuries of life. The Roman Pontiff does it. How can those under him say  they can’t?

In the prostitute rehab centre the inmates were aged around 30  rescued from pimps in Italy, Tunisia, Ukrane etc. and he spent hours taking to their stories of enslavement. No wonder someone described him as “miracle of humility in an era of vanity.” Where

there is a will there is a way  to do it, even for the most busy man on earth.

Look at the face of France dressed as a nurse. A picture speaks thousand times more eloquently than words. Think of ways in which  you and I can imitate him to wipe the tears of the crying humanity. james kottoor, editor)

On Friday, Pope Francis visited a neonatal hospital unit and a hospice for the terminally ill, stressing the dignity of human life from conception to natural death.

The Sept. 16 visit is the latest in the Pope’s “Mercy Friday” initiatives, to spend time with various groups each month during the Jubilee of Mercy.

In previous trips, he has made surprise stops at places including an elderly home, a drug and alcohol rehab center, and a facility for retired priests.

In this month’s visit, Pope first visited the San Giovanni hospital, stopping at both the emergency room and the neonatal unit. Currently there are 12 babies with various conditions in the unit. Five of them – including one set of twins – are in very serious condition in the ICU.

A Vatican description of the event said that Pope Francis wore a hygienic mask and took other sanitary precautions, like all visitors to the unit, where the children’s immune systems are often weak.

He spoke to the babies in each incubator, and greeted their parents, offering words of comfort.

Pope Francis then visited the Villa Speranza Hospice, where 30 patients in the terminal stages of illness are housed. He greeted each patient one-by-one, as well as their families, in an emotional encounter.

Through the visit, “the Holy Father wanted to give a strong sign of the importance of life, from its first moment to its natural end,” the Vatican said in a statement.

“The acceptance of life and the guarantee of human dignity at all stages of development are lessons repeatedly stressed by Pope Francis,” the Vatican continued, adding that the Pope’s dual mercy visit is a “concrete and tangible sign” of how essential it is to give our attention “to those in the most vulnerable and precarious situations.