“What they don’t teach in Catholic college: Women in the priesthood and the mind of Christ”, is the descriptive title of John Wijngaards (see photo above) 216-page book, Acadian House.  He has numerous scholarly books to his credit! Search his website.

Whether Jesus instituted Priesthood/churches, is a disputed issue! How could Jesus the bitterest critic of priesthood of his times do it? So we don’t go into it at all. Granting that he  did, just go through John’s arguments.

John had been, and still is, my close friend from our studies at St.Peter’s Rome. That is too long a story, ever since he bumped into my room by accident! Besides a scripture scholar, he has been a great missionary in Andhra, professor at St.John’s.

He visited my house in Kerala and promoted my New Leader with an Andhra edition, and was present uninvited for my marriage at Bangalore. He is an extrovert and I an introvert, but thick friends!

His view of me is I am like an Oak, never bends but breaks, he instead, a creeper quietly falls down to ground in the midst of raging storms, then climbs up again. So he sticks on. I agree on that! I can wish him all the best only! He is in and I am out, but united in the global canvas!

That said please read through my friend Dr.John from Netherland, now in UK. He continues to be a very forceful writer and a leading Light on matters scriptural and theological! james kottoor, editor ccv.

In a small, very readable and well-argued book, John Wijngaards presents his decades-long research on women's ministry: What They Don't Teach You in Catholic College: Women in the Priesthood and the Mind of Christ is invited to follow him on a journey that recalls his own awakening shortly after the Second Vatican Council to his present scholarship on the issue.

Wijngaards' verdict is unequivocal: If the church continues to ignore insights from Scripture, reason and experience in favour of the tradition, it perpetuates a cultural prejudice that has held back millions of women. Given the changes in similar teachings, slavery in particular, there is no reason why the position toward women could not change.

Examining Scripture takes up most of the book. It is moving to see the argument develop in close readings of biblical texts. Jesus' words, deeds and relationships to women must be read in view of the cultural context of women's subordination, Wijngaards argues. Jesus did not call for the radical overthrow of the patriarchal order — but neither did he call for the abolition of the institution of slavery.

The Gospel of Luke highlights the importance of women in the formation of the church. Regarding Jewish religious institutions, Jesus radically questioned an exclusivist understanding of priestly sacrality and sacredness and instead preaches the grace and love of God who dwells in the heart of everyone.

While the 12 apostles were the first authentic witnesses of faith, they were not the only part of the emerging ministry. According to Acts, the members of the early community experienced the Spirit's presence as overcoming cultural and social divisions. Wijngaards carefully reconstructs the development of these early communities and their governance structures. 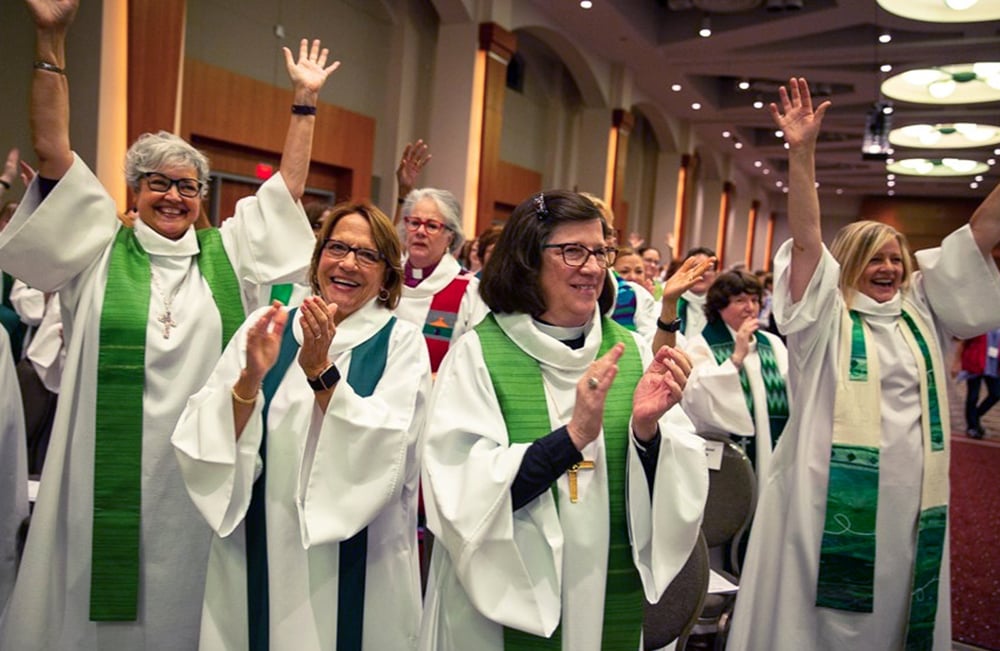 He emphasizes that according to Paul, in the Christian communities, sex, class or race must not play a role, and he names the explicit pastoral qualifications for priesthood, which included men and women. The Letter to the Hebrews summarizes these as vocation, suffering, compassion and kindness in dealing with others. None of these qualities are gendered.

Yet, examining the second source of theological judgment — tradition — Wijngaards acknowledges that the classical teaching excluded women from priesthood.

The obstacles to women's leadership have always been their body and their sex. Until the revision in 1917, Canon Law ascribed a natural weakness of mind to women, asserting that they are not created in the image of God and, by nature, are subject to men. Established especially by the most influential theologians of medieval theology, including Thomas Aquinas and Bonaventure, this view confused cultural bias with natural and divine law.

Wijngaards, however, counters that "tradition" must necessarily be complemented by the other sources of theological judgment, lest it become biased. Just as the Catholic Church claimed that women are inferior, it also claimed that slaves are "naturally" subordinate, and it continued this teaching until the late 19th century.

Regarding women's ministry, the obstacle that prevents them from being ordained is still their sex: They are equal in dignity to men, it is now stated, but they must be excluded from priesthood because they do not physically resemble the "Son of Man."

Apart from Scripture and tradition, reason is a third source of theological judgment. Clearly, the exclusion of women from ministry cannot be justified by science, theology or ethics. The church has now embraced the framework of human rights. But human rights are women's rights, too. They rest upon the theological reasoning that dignity has been endowed to every human being by God. It is impossible to argue for dignity and human rights of women in the church and still limit certain rights to one's sex.

Finally, the experiences of the faithful must also be considered. After the Second Vatican Council, Wijngaards recalls, many Catholics expected that ministries would soon be reorganized to match reforms, especially the understanding of sacramentality.

Wijngaards left priesthood because of the church's teaching on sexuality, and from then on, dedicated his work to the equal rights of women in the church. In the book, he quotes from letters he has received over the years as well as recalling the experiences of women religious who work in Christian communities in the absence of priests. They all lament the full recognition of women's ministry.

Wijngaards' book encourages Catholics to seriously engage with their faith. He provides readers with theological reflections that recalibrate a faith tradition that is at risk of losing its core mission: to remember the words and deeds of Jesus Christ in the Eucharist, and then to go and do as Jesus taught.

Christians believe that they walk in the presence of the Spirit who, as Wijngaards reminds them, accompanies them throughout history. The Spirit-advocate assists the faithful in discerning their judgments when faced with new challenges.

If the Eucharist is to be held in memory of the son of a human who is, at the same time, the Son of God, the church must stop being fixated on gender: Jesus' gender or, for that matter, the apostles' gender, is not a special gift.

Likewise, the church must stop regarding women's gender as a flaw. This narrowing of one's perspective is "traditionalist" in all the wrong ways: It contradicts rather than reflects the sources of theological judgment that ought to inform the tradition. By manipulating the reading of Scripture, dismissing reason and disrespecting the experience of the sense of the faithful, the Vatican has returned to a tradition that is undeniably part of its history.

Women are capable and needed as ministers. The church can, at any time, return to the praxis of the first centuries, ordain women as deacons and ordain women as priests, whether in extraordinary or regular circumstances.

Independent of whether one follows this conclusion or not, the book is a valuable source for anyone interested in learning about theological reasoning and discerning women's ministry in the church.