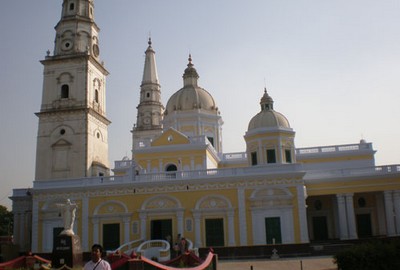 Till 2009, the church accounted for over half of the total foreign tourists coming in the city. Now that number has dropped to less than 20%.

Meerut: The number of foreign tourists coming to Meerut has risen by 173% in the last five years. Most of them are not in the city to visit the Basilica of Our Lady of Graces, popularly known as the Sardhana church.

Mahesh, a tour guide in Sardhana, says, "A few years ago, if there were foreign tourists in the city, it meant they were headed to the Sardhana Church. For many years, you did not get a single visitor from outside India who'd want to explore the city. All the visitors went to Sardhana, particularly during the biennial feast and fair."

Till 2009, the church accounted for over half of the total foreign tourists coming in the city. Now that number has dropped to less than 20%.

Amit Srivastava, Meerut's regional tourism officer, says, "This shows that tourists have more options now. The Basilica at Sardhana has always been very popular among foreign tourists, but over the last few years, other monuments have gotten popular."

Uttar Pradesh Tourism Department figures say that the total number of foreign tourists visiting the city was only 1172 in 2010, which jumped to a whopping 3200 in 2015. According to historians and tourism officials, Meerut's role during the British Raj has been one of the major reasons for this rise.

Amit Mohan Pathak, a historian and curator at the Government Freedom Struggle Museum, says, "It is mostly those drawn by its British history and Mahabharata connection who come here. We have seen a number of organised tours and groups coming in the last few years."

Gavin, a British tourist who had visited Meerut in 2014, says, "In the UK, Meerut is popular as the place from where the 1857 mutiny originated. At that time, the place was a big military establishment and there are quite a few people who can trace their roots to the city as they had ancestors living here during the British rule. I was travelling from Delhi and took a detour to Meerut because I wanted to see the monuments and remnants from the British past.

But I was actually blown away by the Mahabharata-era monuments at Hastinapur and the Augarnath Temple. That is Indian heritage at its finest."