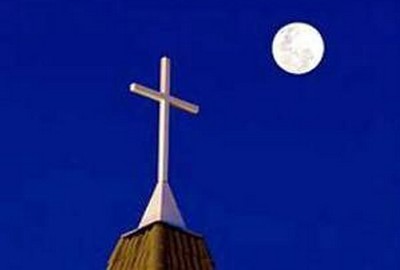 The administration hasn't helped, they said.

Meerut (UCAN) Hundreds of Christians in Uttar Pradesh have come together to write a letter to Prime Minister Narendra Modi complaining that attacks against Christians have gone up in the past few months.
The letter given to the District Magistrate of Meerut they said a graveyard belonging to them was forcefully taken over by the Hindu community, a Bible torn in June and a priest beaten up recently, Times of India reported.
The administration hasn't helped, they said.
On Monday, hundreds of Christians staged protest against the detention of a priest John Isaac in Mawana on the charges that he was indulging in conversion in an illegal building.
Christians allege that on Friday, sub divisional magistrate at (SDM) Mawana, Rita Punia, asked him to be present in Mawana police station to explain how he was building a 'prayer hall' without permission. However, on reaching the police station, the priest was detained.
Later, when members of the community came to know about the incident, they met the SSP after which the priest John Isaac was released.
SDM Rita Punia, however, denied that the priest was detained. She said "We got a complaint by a few locals that a church was being constructed and conversion taking place, but later we found it had no base as it was not a 'church but a prayer hall and no conversion was taking place as such."
She added, "But we are certainly looking into the legality of the building constructed."
According to John Issac they purchased 182 sq yards of land in 2014 for the main purpose of erecting a prayer hall to cater to local Christians who had to travel long distance to attend Church on Sundays.
"We had already submitted the requisite papers to the authorities at tehsil for permission for prayer hall. Meanwhile, we had started conducting our prayers which a few members of majority community disliked and alleged that we were trying to convert people here in an illegal building," Issac said
Isaac further stated that he was asked to be present in Mawana police station to explain his situation but was detained. Even SDM threatened to bring down the building.
District president of All India Issai Mahasabha, Robin Nath, who led the delegation to DM office, on Monday, said, "Since the last couple of months we are being subjected to veiled attacks by right wing organizations. In Mawana, members of Bajrang Dal had in fact threatened the priest who is ever since constantly living under fear. In Kaseru Baksar area our graveyard has been taken over by right wing groups. In June a priest was thrashed while his Bible was torn apart in Shastri Nagar area. Unfortunately, even police tries to suppress these incidents and that is why we written to DM and also sent a copy to the prime minister."
When TOI contacted Vijay Joseph, the priest who was manhandled in June at Shastri Nagar, he said, "Spiritual discussions among members of various religious groups keep taking place and one such was taking place at a friend's place in Shastri Nagar when a few members of Bajrang Dal attacked me when I came out of the house. They hurled abuses at me alleging that I was involved in conversion. Later, even police did not allow us to lodge a formal complaint. Too much pressure was built upon me to stay quiet despite the fact I had done no wrong."
Source: Times of India