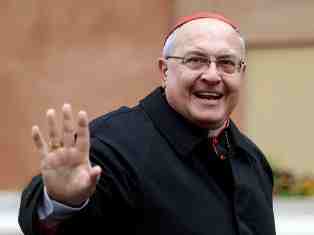 New Delhi: The Vatican congregation for the Oriental Churches has resolved a controversy among Oriental Catholics living in the Indian capital region.

It has favorably considered a request from a section of Oriental Catholics for permission to receive Sacraments from Delhi Latin archdiocese.

However, Cardinal Leonardo Sandri, prefect of the congregation, has ruled out granting them “particular indults of a general character,” or general permission to choose rites.

In the pic: Cardinal Leonardo Sandri

The cardinal’s January 28 letter acknowledges the issue is “delicate” and has urged “all concerned” to act with mutual understanding and respect.

The letter tries to dispel confusion over the legal status of Syro-Malabar Catholics, who chose to remain with the Archdiocese of Delhi when Faridabad diocese was created for them in 2012.

The diocese spread over 950,000 square kilometers covers Haryana, Himachal Pradesh, Jammu-Kashmir, Punjab, as well as the districts of Gautam Buddhanagar and Ghaziabad of Uttar Pradesh, besides the National Capital Territory of Delhi. However, the Oriental Catholics are mostly in Delhi and surrounding areas.

Some Orientals approached the congregation after a “Joint Pastoral Letter” signed by the prelates of Faridabad and Delhi in November 2013 notified that all Syro-Malabar Catholics had automatically become part of Faridabad diocese.

The Vatican congregation says it was “not surprising that some members of this Oriental Church, having lived for a long time in a Latin ecclesiastical context” experienced “a sense of disorientation” after the new diocese was created.

These Catholics, who have lived outside Kerala for generations, expressed unhappiness with the transfer since they were “comfortably assimilated” in the local Latin parishes. They claimed that more than 6,000 Orientals had signed the petition to Rome seeking permission to remain with the Latin archdiocese.

Archbishop Kuriakose Bharanikulangara, bishop Faridabad, later clarified on several occasions that there was no compulsion for anyone to join the new diocese. However, he wanted those remaining with the Latin archdiocese, not to claim to be Syro-Malabar members when they go to Kerala, their native place.

The Vatican congregation has clarified that the Church laws governing both the Latin and Oriental Churches have no provision for “general right” for anyone to choose one’s rite. Rather, there is a duty to follow one’s own rite “insofar as possible,” it asserts.

However, when someone requests for transfer to another rite, bishops concerned can facilitate it presuming Rome’s permission. “Care should be taken to register all such transfers” according to the Code of Canons of the Eastern Churches, Cardinal Sandri’s letter says.

The Code of Canon Law of the Latin Church stresses that if members of other Churches continue to receive Sacraments from its parishes does not imply they have become its members, the Vatican letter explains. However, a Syro-Malabar Catholic can, if he wants, get fully involved in the activities of a Latin parish.

The Vatican wants pastors of the two Churches “to understand the delicate situation of such persons and to facilitate the tranquil and serene prosecution of their life of faith.”

The letter also wants the Latin pastor to register such sacraments in his parish records, specifying that the person is a Syro-Malabar member. The Latin pastor has also to send the certificates of such baptism and confirmation to his Syro-Malabar counterpart.

The Latin pastor can conduct a marriage if one of the two parties is Latin. If both parties are Oriental, the Latin pastor will seek permission from the Oriental counterpart. “In case of mixed marriages or disparity of cult, the competent hierarch is the Oriental,” the Vatican explains.

It also wants the Latin pastor to notify the Oriental pastor in all these cases. “Such inter-ecclesial collaboration should take place with respect, solicitude and promptitude, having the spiritual good of the faithful as the final goal,” the Vatican letter advises.

The congregation wants the Synod of the Syro-Malabar Church to ask their pastors to imbibe “the same spirit of willing collaboration” when Oriental Catholics from Latin parishes request for Sacraments in their original rite when they go to Kerala.

The letter reminds the Orientals that they are subject to the Oriental bishop even if they frequent Latin parishes. ‘None the less let them rest assured that their situation is understandable and their motivations are respected,” the letters says.

It also urges all to take care that these persons do not feel excluded from full involvement in the Latin parish or slighted by the Syro-Malabar parish.