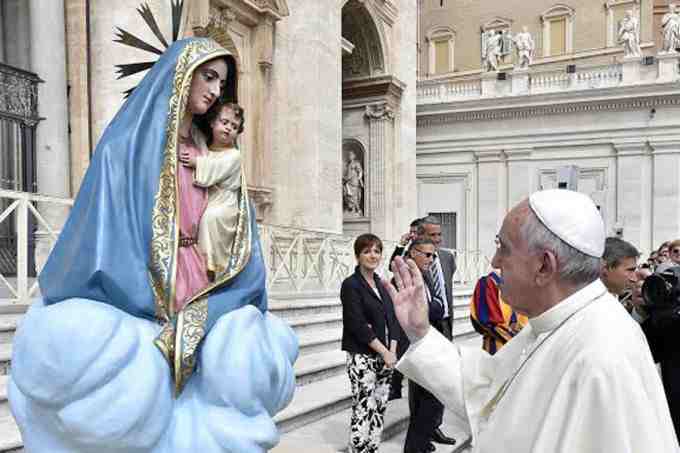 “Mary’s ‘yes’ opens the door to Jesus’ ‘yes’: I have come to do Your will, this is the ‘yes’ that Jesus carries with him throughout his life, until the cross,” he said in his April 4 homily.

Through Mary’s affirmation, God “becomes one of us and takes on our flesh,” he said.

“Today is the celebration of ‘yes’,” the Pope continued. “It is God’s ‘yes’ that sanctifies us and keeps us alive in Jesus Christ.”

The Feast of the Annunciation marks the visit of the angel Gabriel to the Virgin Mary, when he told her that God had chosen her to be the mother of Jesus Christ. Mary responded “Let it be done to me according to your will,” according to the Gospel of Luke.

The Pope reflected on major figures from the Bible – such as Abraham and Moses – who “said ‘yes’ to hope offered by the Lord.” Other figures, like Isaiah or Jeremiah, initially refused or hesitated before saying “yes” to God.

The Pope noted the presence of priests in the congregation who were celebrating the 50th anniversary of their priesthood. He also recognized the Sisters of Santa Martha who renewed their vows in silence at the Mass.

He encouraged each person in the congregation to reflect on whether he or she says “yes” or “no” to God.

“Or am I a man or woman who looks away, so as not to respond?” he asked.

The Pope prayed that God “grant us the grace to take this path of men and women who knew how to say ‘yes’.”