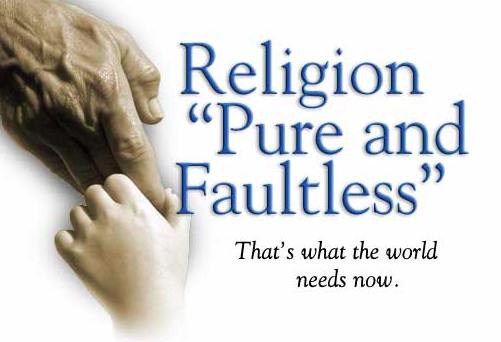 What is religion pure & undefiled?

What is important is to be a ‘good person’, not to be a believer or unbeliever or to be like any one else which we can’t however much we try. Each one of us has to use our own God-given talents and multiply them to a 100 fold. Think of the parable of the talents. So the  fist thing necessary is to be good, to be true, honest to God, to ourselves, to others and to be busy like bee to multiply the talents God has given us without burying any of them in the ground. Even Pope Francis said it is better to be an honest atheist than a hypocritical Catholic.

Change and growth is the essence of life. But growth can be for the better or worse. We now live in a fast changing world. Religions and religiosity or spirituality are not the same but different. We see  many religions when we look horizontally, especially organized religions competing among themselves because all of them are tainted and defective. Organized religions are for the organizers. Like political parties they want to lord over others and so we campaign against it. In spirituality and religiosity we look vertically, in our relationship with the Supreme spirit or that power called variously – God, Iswar, Sachidananda, One without a second or Jesus whom Christians call God incarnate.

Perfection is no Trifle!

Here our first duty  is to become like Jesus, a perfect human being like him by using all our God given talents to reach that goal. It is said no one could accuse him of sin. Is it possible to be perfect like Jesus? Here recall what Michael Angelo said: “Trifles make perfection, but perfection is no trifle!” A slight shade or a small spot on a fair and lovely face may be trifle, and all of us are loaded with such defects in our character and getting rid of them all is perfection, which is not done even if we try the whole of our life time. That is why it is said, “Perfection is no trifle.”

Comparisons are odious and in true religion or spirituality there is no place for proving oneself to be better than our neighbor to dominate as we are clearly taught by the parable of Pharisee and publican praying in the temple. True religion is all about service, making ourselves useful to our needy neighbor and not using our neighbor. Being useful to our neighbor and using our neighbor for our benefit make the whole difference. Hence St. James (1.27) says: “Pure religion and undefiled before God and the Father is this, To visit the fatherless and widows in their affliction, and to keep himself unspotted from the world.”

What does it mean? It means just the opposite of what the organized religions are often busy with and doing: a whole lot of ritualistic exercises – noisy prayers and singing, (actually or derogatively called ‘Lip service’ often without the slightest involvement of the mind), kneeling, standing, sitting, handshaking (all sorts of physical exercises), all forbidden by Jesus who wants us to pray in silence closing the five doors of our senses. In St. James’s definition of true religion none of the items cited above are included.

But in the report below many labelled as lapsed Catholics, unbelievers, agnostics or atheists are doing just what St. James describes as marks of true religion – compassionate treatment of those in need. An atheist is busy providing affordable houses for the African-American community; a lapsed Catholic travels to India to do voluntary medical service; a former evangelical is busy attending to the mental health of gay and lesbian community; an agnostic has joined Pace Corps and is organizing food coops for the hungry. And the reporter below says:

“No, most of them do not belong to an organized religion. But many are more compassionate, welcoming and devoted to those on the margins of society than quite a few Catholics I know.” What is it that you want? Persons who tom-tom about the glories, name and fame of your personal or organized religion or those busy showing mercy and compassion to the needy, hungry, sick, lame, blind, lonely and in margins of society? St. James and Pope Francis are saying the same thing: “Get out, get out of the Church of the sacristy and go to the peripheries, to befriend the stranger and foreigner!”

To become truly religious and spiritual you need not belong to any organized religion, big or small. It is enough you opt to become one of the CATTLE CLASS, the  compassionate Company of Jesus who worked for the poor and needy, the lowly placed, the afflicted and homeless migrant or neighbour. Organised religion and high positions in it may be a Peacock’s feather to sport on your cap to receive unsolicited salutations and undeserved appellations but it will not make you practitioner of true religion: “Pure religion and undefiled before God and the Father” which consists in making yourself “USEFUL” to those in need, and not “USING” your neighbour for your own benefit. james kottoor, editor ccv.

Please read below report on unbelievers & atheists in US

Half of U.S. Catholics say belief in God is not necessary to be a good person

For the first time, a majority of Americans—56 percent—say it is possible to be a good person without religious belief. And about half of all U.S. Catholics agree.

Those are the findings from a new Pew Research Center report drawn from two polls conducted among about 5,000 American adults in June and July.

The majority of Americans now believe that “God is not a prerequisite for good values and morality,” said Greg Smith, Pew’s associate director of research, in a post about the findings. “[T]he public’s increased rejection of the idea that belief in God is necessary for morality is due, in large part, to the spike in the share of Americans who are religious ‘nones,’” he explained.

The majority of Americans now believe that “God is not a prerequisite for good values and morality.” “In the 2011 Pew Research Center survey that included the question about God and morality, religious “nones” constituted 18 percent of the sample. By 2017, the share of ‘nones’ stood at 25 percent,” the report notes.

But even some believers have changed their opinions on the matter during the past few years. According to the report, among white evangelical Protestants, 32 percent now say belief in God is not necessary to have good values and be a moral person, up from 26 percent who said this in 2011.

Regarding these so-called atheists Columnist Kaya Oakes writes labeling them:  Devoted Atheists: “In finding a way to be compassionate toward nonbelievers, it helps that many of my non-believing friends are not simply spending their Sunday mornings paging through The New York Times and lingering over brunch, but are actively engaged in community service and social justice issues.

“An atheist friend works in affordable housing issues in the African-American community. Another atheist friend writes about feminist issues, particularly focusing on empowering young girls. The lapsed Catholic son of a friend travels to India to volunteer in medical clinics. A former evangelical I know works to bring attention to mental health issues in the gay and lesbian community. Atheist and agnostic students of mine have served in the Peace Corps, started food co-ops in inner-city food deserts, volunteered with literacy organizations, taught inmates to read at San Quentin and tirelessly worked to correct the notion that millennials are interested only in cellphones.

“No, most of them do not belong to an organized religion. But many are more compassionate, welcoming and devoted to those on the margins of society than quite a few Catholics I know.” It shows loss of faith sometimes reflected a sense of sorrow for some, for many others, leaving one faith tradition behind to explore others or to explore living without faith, led them to an amazing discovery."

(Material from Religion News Service was used in this report.)