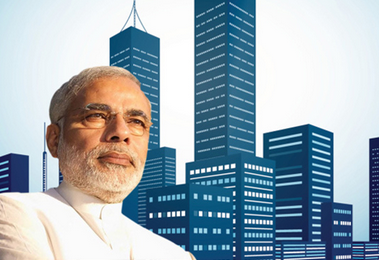 The latest slogan from the Narendra Modi Government is ‘100 smart cities’. Though the concept lacks clarity, the government has provided a general framework of what it plans to do in the ‘fortunate few cities.’ A 'smart city' has been defined as an urban region that is highly advanced in terms of overall infrastructure and civic facilities. It will have adequate water and electricity supplies, affordable housing, good sanitation, efficient public transport, good internet connectivity and safety of people, especially women and children. The government plans to do this by upgrading the existing facilities in 100 selected cities.

But the moot point is: Are not these facilities sine qua non for civilised existence of every citizen? Is it not democratically untenable to help a select few enjoy the fruits of development? Can a government of the people, for the people and by the people work for the benefit of a lucky few? With large-scale migration of people from villages to urban centres, every city is becoming uninhabitable pigeon holes. The facilities that the government now plans to provide in the selected ‘smart cities’ are absent in most urban and rural areas. They are the basic facilities any government is duty-bound to provide to citizens. It is unethical to restrict their availability in selected areas.

The cost of developing these smart centres is exorbitant. Reports suggest that it will run into thousands of crores of rupees which the government plans to generate through public-private partnership mode. Is it justifiable to invest such humongous amounts in a few cities at the cost of other areas? Lakhs of villages lack availability of potable water. Women walk miles to fetch a few pots of water. Electricity is a rare ‘visitor’ for most villagers. Garbage dumps are a common sight in cities. Public transport is in shambles. Crowded local trains and buses are the bane of city life.   Forget villages, even semi-urban areas do not have proper health care facilities.

The need of the hour is to provide better civic facilities across the country rather than make a few cities smart with speedier broadband connectivity and other amenities. It is nothing but leaving the majority as second class citizens while allowing a few to enjoy the fruits of development. This selective development programme, as against universal development, first came to light when the Prime Minister announced ‘model villages’ which each Member of Parliament was expected to adopt. The fact that over 100 MPs have not yet opted for this scheme shows the failure of such development model. People’s representatives would not like to be seen as favouring some people in a constituency while neglecting others.

The involvement of private sector in developing smart cities means that profit motive rather than public welfare will be the prime consideration. A government should be known by its work. Catchy slogans may sound well. But, they will fail on the ground. The country needs not a few smart cities, but development across regions – a ‘smart country’, if we can call it so.