'I want you…to be signs of hope to those who need encouragement, a helping hand to the sick, a welcome smile to the stranger'

Pope Francis has urged young Catholics in Myanmar to “make a ruckus” issuing his appeal at a Mass in St Mary’s Cathedral, Yangon at the end of his visit to the country.

(Note: “Make a mess! Make a mess!” When did you hear  this war cry from the horse’s mouth? From a peace loving ‘bridge builder par-excellence’ Pappa Francis? Was he not perhaps, repeating the ancient Latin wisecrack: “Si vis pacem para bellum!” (If you wish peace prepare for war!) He said it first to the youth, on his trip to South America.

In doing this, was he not imitating a Youthful Jesus in this thirties (therefore rash and immature for elders even in our own times) questioning and challenging  the elders and rulers of his time in both the religious and secular domains of his times? Thus urging the youth of Myanmar to be young, bold and adventurous like Jesus in what they say and do?

The first one in history who taught the youth to grow in wisdom and age by questioning was Socrates. For doing that he was accused for subverting the youth and poisoned to death. Jesus questioned the hypocrites of his times – Scribes, Pharisees, High priests and Harrods – and was crucified to close his mouth. He thus rose to immortality as a Rebel!

Do you want to become immortal like Jesus and Socrates? The substance is, there is nothing wrong per se, in questioning the high handed wheeling and  dealing of the highly placed when everything else fail to make people think. James kottoor, editor, ccv.

“Do not be afraid to make a ruckus, to ask questions that make people think!” Francis told them during his homily. “And don’t worry if sometimes you feel that you are few and far between. The Gospel always grows from small beginnings. So make yourselves heard. I want you to shout! But not with your voices. No! I want you to shout with your lives, with your hearts, and in this way to be signs of hope to those who need encouragement, a helping hand to the sick, a welcome smile to the stranger, a kindly support to the lonely.”

His appeal is similar to one he made during trips to South America where he urged young Catholics to “make a mess” by living in solidarity with those less fortunate.The Pope has been on a 3 day visit to Myanmar, the first papal visit to the country, where he his messages have focussed on reconciliation and inclusion of every group in society. His big-tent approach led him not to mention the phrase “Rohingya” during a speech to the country’s authorities in Nay Pyi Taw although a Holy See spokesman last night suggested it was possible he did raise the matter during meetings with the country’s president, Htin Kaw, state counsellor Aung San Suu Kyi members of the still powerful military.

His message to Catholics has been to encourage the relatively small Church of 700,000 Catholics to pursue peace building efforts and to use forgiveness and mercy as their “spiritual GPS”. 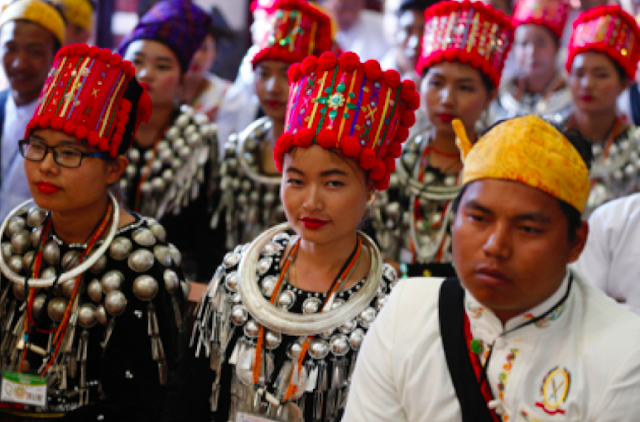 Today, in his final public address in the country, he urged young people to become “messengers” of the gospel, to learn how to cultivate a prayer life amid a world of “many sounds” and to share their faith with others. The Mass took place on the Feast of St Andrew with Francis urging young people to be inspired by his example.

“How does our Lord send Saint Andrew and his brother Simon Peter in today’s Gospel? ‘Follow me!’, he tells them. “That is what it means to be sent: to follow Christ, and not to charge ahead on our own! The Lord will invite some of you to follow him as priests, and in this way to become “fishers of men”. Others he will call to become religious or consecrated men and women. And yet others he will call to the married life, to be loving fathers and mothers. Whatever your vocation, I urge you: be brave, be generous and, above all, be joyful!”

The Pope’s plane for Bangladesh was due to leave at 13.05 local time, and in a message to the country on his departure the Pope thanked them for their “warm welcome and generous hospitality” and expressed his “deep appreciation” to the “beloved people of Myanmar.”