Lucifer is not in a hurry, Italy is an inferno.

(Note:  Isaac Gomes, Associate Editor, Chuch Citizens' Voice provides readers and their friends an insight into the inferno-like heat of Italy and Rome, thanks to Dr Robert Moynihan, who reports from the Vatican).

Inside the Vatican Magazine

Letters from the Journal of Dr Robert Moynihan

In these days in Rome, the heat is infernal.

And the Italians are saying so.

A headline here reads: "Lucifero non ha fretta, l'Italia è un inferno."  It means "Lucifer is not in a hurry, Italy is an inferno." 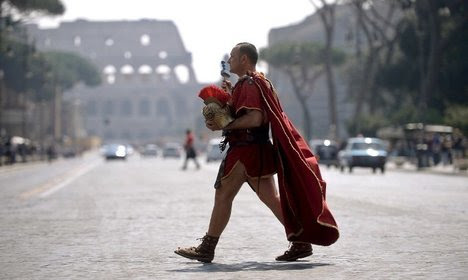 (Here, a Roman centurion crossing the road despite the heat, with the Colosseum in the distance. Photo: Filippo Monteforte/AFP)

Meaning: "Lucifer isn't in a hurry to take a vacation. He will remain to keep us company with the two tongues of flame at least until the end of the week."

And also this: "A ferragosto sono attese temperature infernali." Meaning: "On August 15, infernal temperatures are expected."

So it seems likely that this will continue a bit longer…

Today at midday in Rome it was 40 degrees Celsius — 104 degrees Fahrenheit.

There was hardly a flicker of a breeze, perhaps 2 miles an hour every so often.

And, though it seems quite dry for Rome, the humidity here is still about 25 percent.

That's the problem with Rome — not so much the heat, but the humidity.

In fact, one report says "humidity and other factors are making it feel much hotter with the so-called 'perceived' temperature in Campania, the region around Naples, estimated at a broiling 55°C (131°F) on Friday."

But it's still pretty hot, if you are the perceiver….

It is so hot that you feel you are inside a pizza oven when you are out in the sun.

It is so hot that, as you walk, you look right and left for any shady spot, under a colonnade, by the walls of any building, under cafe awnings, anywhere there is a bit of shade, rather than stay in the sunlight.

Anything for a bit of relief from the sun's pounding bright rays.

Still there are pilgrims, God bless them, many of them seemingly Chinese, gathering by the doors of the Vatican museums, walking up the long walls, braving the heat of the day in order to see the treasures.

But many old people and shut-ins are in trouble. In Milan, there has been a spike in calls from old people as thousands have called for medical assistance.

Animals and crops are also in trouble. Cows are producing 20 percent less milk. And Italy's olive and grape harvests this fall are expected to be down by a similar amount due to the heat and dryness. The water level in Lake Garda in the north is almost one-third below capacity. 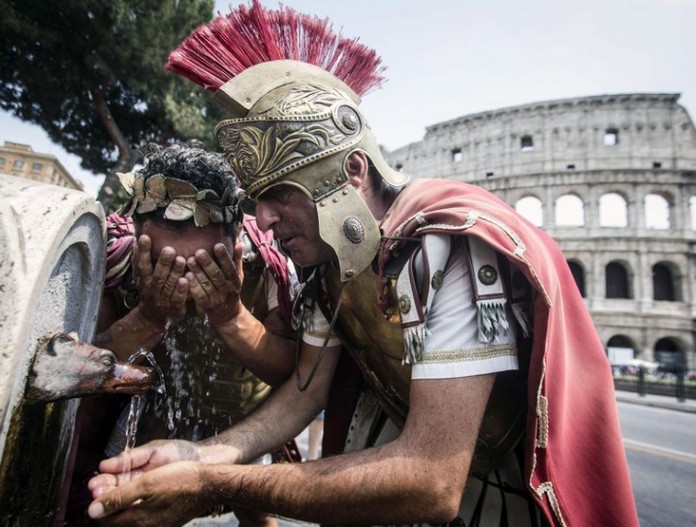 Patrick Browne, a writer for The Local website, has written an account of how the ancient Romans dealt with the heat.

"The Romans were no strangers to the summer heat," Browne writes. "In fact, the modern term: 'the dog days of summer”' actually comes from the Latin 'dies canincula,' the Roman term used to describe the stuffy, hot period of weather between July and mid-August.

"The name comes from the fact that Sirius (the dog star) rises with the sun at this time of year. Romans thought this was the reason for the increase in temperature.

"While they may not have been experts in meteorology, the Romans did know a few practical ways of coping in a heatwave — so what advice can they give us?"

The account below to the end is by Patrick Browne (patrick.browne@thelocal.com).

1. Go to the Frigidarium

The frigidarium was a large cold pool at the Roman baths where Romans went to cool down… The waters of the frigidarium were kept chilly in the summer months thanks to the addition of snow and ice that had been imported from the Alps. 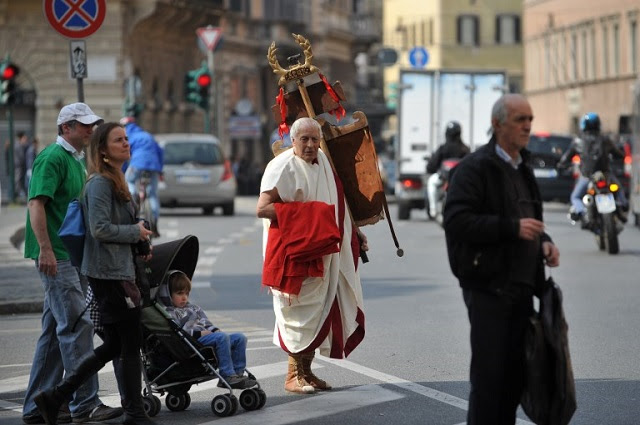 The Ancient Romans did not do a nine-to-five day.  In fact, the average Roman only had a six-hour workday, toiling from sunrise until noon.

Before the gelato was invented, Romans hoping for a cool snack had to use what nature offered them.

While the rich patricians and Roman nobility would often have huge stores of imported snow at home to keep them cool, citizens had to visit the snow shop.

There, mountain ice was kept in underground pits and could sell for more money than wine…

4. Turn on the air-conditioning

Air conditioning in ancient Rome? Yep. The Romans were master architects and kept their homes cool during the summer months by employing a series of architectural tricks that provided ancient forms of air conditioning.

For example, some rich residents pumped cold water through the walls of their homes to freshen their dwellings during the summer months.

Obviously, this was only for a select few and the average Roman homes, or insulae, were probably very stuffy indeed…

[Isaac's note:  "The reason heritage buildings like Taj Mahal, Lotus Temple and Gol Gumbaj ensure a cooler clime inside is that they have thick walls that act as a barrier to heat. The scale of construction was always grand, resulting the structure acting as a heat capacitor. And a water body close to the building drains the heat stored inside," said Shah, an 81-year-old mechanical engineer with a degree from Clemson University, USA. (Source: DNA – Daily News and Analysis: 10 January 2015). Bahá'í House of Worship in New Delhi is also an architectural masterpiece with natural air-conditioning and lighting ]

Many wealthy Romans escaped the heat of the summer months by going to their country houses in the hills outside Rome.

With its restricted airflow, and masses of heat-storing marble, Ancient Rome was a furnace in summer and the city's wealthy patricians were fully aware of what is known today as the "urban heat island effect," meaning cities often feel hotter than they are.

Urban centres are one to three degrees Celsius hotter during the day than the surrounding countryside, while at night the difference can be as much as 12C.

That's the difference between a good night's sleep and a sweaty night spent tossing and turning.