‘Loves of the Popes’ and the Vatican’s New Normal 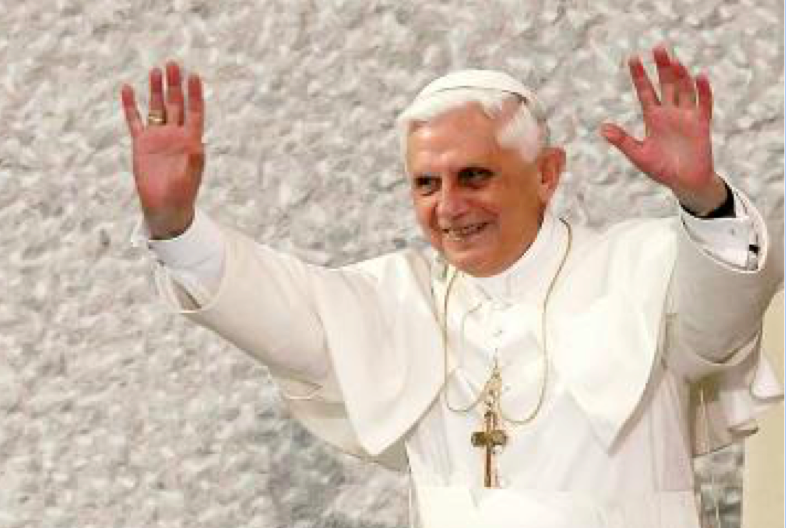 Pope Benedict XVI greets the crowd during "Many Hearts for the pope, messenger of peace" meeting at the Vatican on June 28, 2004. Photo courtesy of REUTERS

(Note: Administration was not Benedict’s forte, but he had the guts to break up a “Gay Lobby” that flourished inside the Vatican, called also the “Holy Sea”. Why the Pope himself is addressed even today as “His Holiness” which I described as blasphemy pure and simple long long ago? But the most humanizing part of  Pope Francis is that he was the first among all Popes to describe himse: ”I am a sinner” to the interviews after his election.

Why wonder if there was or is, Gay Lobby in Vatican? Was there not a betrying Judas, denying Peter and doubting Thomas and power hungry James and John who wanted to sit on the right and left of Jesus seated on his royal throne? Also didn’t Jesus tell his disciples to allow the wheat and weeds to grow together till the harvesting season to separate the weeds as fodder for fire?

If the smart and good looking young Benedict did not fall in love with girls and vice versa, there must have been an abnormal human development in him? If he did, he was fully a normal guy. That was the story with Pope John Paul ii and Francis. Only they did correct their youthful flirtations unlike many womanizing popes of history who became a scandal to the faithful. To err is human, to mend one/s ways in time is divine.

Don’t worry, be prepared even to get shell-shocked beyond imagination, not now but in the distant future, when people will be discussing the natural human development of a “pregnant pope”. That is not to say Celibacy has lost all its sanctity and glamour. It will  continue to shine as a pearl of great price side by side with married priesthood, not monopolized by the patriarchal section but shared also by the fairer section who forms 50% of humanity, following scriptural principle “Jew or gentile, man or woman.” you are all one Jesus. And Jesus himself was always surrounded by the fairer section and publicly attached to one whom he had to caution not to touch him because he had to ascend to his father in heaven. He knew how to keep his civilized distance. So should others – man or woman –  who choose the path of a celibate life.

class, caste, community, country and common wealth. The only wealth common to all is “humane humanity”. Into that heaven of peace and harmony let my country awake, let our churches awake, let our human race awake! james kottoor, editor)

The big news out of the Vatican last week was the publication of a book-length interview with Pope Emeritus Benedict XVI in which the former pontiff reflects—the first to do so, as popes almost always die in office—on his controversial eight years as pope.

In the volume, poignantly titled “The Last Conversations,” the 89-year-old Benedict told his fellow German, the journalist Peter Seewald, that he was shocked when he was elected pope in 2005. He also said that while administration was not his strong suit, “I don’t see myself as a failure” and he took credit for breaking up a “gay lobby,” or clique, that he said operated inside the Vatican.

But the revelation that had tongues wagging was not in the book. Instead it came in a magazine interview with Seewald in which he said that Benedict—who was born Joseph Ratzinger—“fell in love … in a very serious way” as a student and struggled “very much” with the idea of taking a vow of celibacy when he became a priest.

“He was really a very smart-looking guy, a handsome young man, an aesthete who wrote poetry and read Hermann Hesse,” Seewald told the German news weekly Die Zeit in a story published on Sept. 8. “A fellow student told me he had quite an effect on women, and vice versa. The decision to choose celibacy wasn’t easy for him.”

The news brought to mind other stories in that vein, such as the confession by Argentine Cardinal Jorge Mario Bergoglio—which emerged the week after he was elected Pope Francis in 2013—that he was “dazzled” by a young woman he met at a relative’s wedding while he was a young man in seminary.

“I was surprised by her beauty, her intellectual brilliance … and, well, I was bowled over for quite a while. I kept thinking and thinking about her. When I returned to the seminary after the wedding, I could not pray for over a week because when I tried to do so, the girl appeared in my head. I had to rethink what I was doing.”Francis decided to continue the path to the priesthood, but said “it would be abnormal for this kind of thing not to happen.”

Similarly, one of the most affecting stories about Saint John Paul II was about how he apparently had at least one flirtation as a young man growing up in Poland, with the apparent object of his attention—or he of hers—a beautiful Jewish girl named Ginka Beer.

Earlier this year a potentially more explosive revelation emerged in correspondence that John Paul, who died in 2005, carried on with a married Polish-American woman over the course of their adult lives. There was never any suggestion in the exchange that John Paul ever broke his vow of celibacy, and the pontiff was known to have close friendships with women and men.

But the intimacy of the letters created a frisson of scandal, as if some boundary had been crossed. In a sense it had. Centuries ago, of course, the love lives of the popes—and cardinals and various powerful prelates—became a source of constant fascination and scandal, and the tales of a bed-hopping Renaissance pontiff like Alexander VI can still make for remarkable reading.

As if in reaction to such episodes, however, popes in following centuries became virtual ciphers, regal monks who seemed to be spiritually and physically in another realm, above and beyond real life. They were encased in piety and stripped of passion, especially of the romantic kind.

The teaching on papal infallibility—which only pertains to solemn declarations by the pontiff and the bishops, not the pope’s personal conduct—was elaborated in the 19th century and added more degrees of papal separation from the flock.

But by the middle of the last century there was also a sense that the popes had become too remote and needed to be humanized, a development that paralleled the Catholic Church’s broader pivot to a more open and pastoral style—and a style that had to be modeled by more open and pastoral, and human, popes.

Part of that “humanizing” trend was to let it be known that popes could also fall in love—at least in an innocent way, and always in their pre-ordination lives.

Hence the promulgation of the story that even Pope Pius XII, one of the more aristocratic and distant figures to sit on the Throne of Saint Peter, had a crush on a girl when he was a teenager. If she had reciprocated his affection “there would be no Pope Pacelli today,” as his parish priest told a reporter in St. Peter’s Square on the evening Cardinal Eugenio Pacelli was elected pope in 1939.

In these days of great anxiety in the church about the role of gays and gay rights, leaking stories about papal crushes can also be useful for signaling that a pope is straight, and not just straight but also virile and seriously attractive to women, an attraction he naturally must renounce.But it’s still a balancing act—trying to advertise a pontiff’s shared humanity with the flock while not encouraging prurient speculation.

Benedict, with his characteristically wry sense of humor, seemed to understand that. In his first book-length interview with Seewald, published back in 1996, the journalist asked then-Cardinal Ratzinger if he had ever fallen in love. The future pope said demurely that he was “touched by friendship” in that regard but “my plans never progressed as far as a clear desire for a family.”

A year later, asked at the launch of his memoirs why the extensive account of his youth mentioned no girlfriends, the future pope quipped: “I had to keep the manuscript to 100 pages.” Even if Benedict was not known as the most warm and fuzzy of popes, he knew the trend line is clearly toward more humanity, more humor, more “normalcy,” as they say—a trend Francis has also pushed ahead.

“The Pope is a man who laughs, cries, sleeps peacefully, and has friends like everyone else. A normal person,” as he said in a 2014 interview. “To depict the Pope as a kind of superman or a star seems to me offensive,” Francis added.

Indeed, at heart the issue is not just about whether a pope can fall in love, or out of love, but about whether the popes as people are so sacred as to be immune from the spiritual and even physical challenges that afflict humanity. The more important message is that they are men, and Christians, not religious robots.

In this latest, and apparently last, interview, the aging Benedict said that was a central lesson he hoped people learned from his shocking decision to retire in 2013—the first pope in six centuries to do so. “I think it is also clear that the pope is no superman and his mere existence is not sufficient to conduct his role, rather he likewise exercises a function,” Benedict said in explaining his reasons for resigning.

“If he steps down, he remains in an inner sense within the responsibility he took on, but not in the function. In this respect one comes to understand that the office of the pope has lost none of its greatness, even if the humanity of the office is perhaps becoming more clearly evident.”