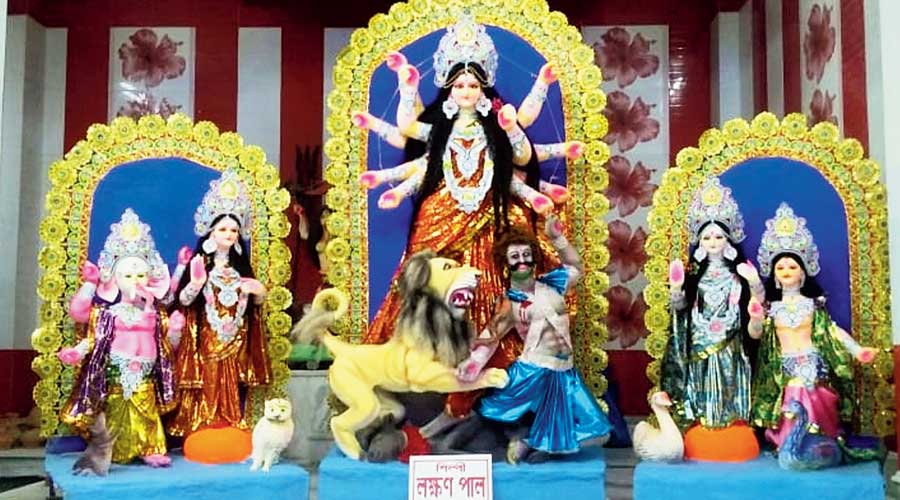 In the village of Suktabari, Hindus are a minority and the annual puja is held with the help of hundreds of Muslim families of the area.

When the whole country is witnessing NDA's aggressive politics of Hindu Majoritarianism, lynching and other forms of subjugation of  the minorities and the marginalised, including putting a stop to the naming of a park in Bangalore after the late Jesuit martyr Fr Stan Swamy, a village in Cooch Behar of West Bengal teaches a lesson on how the majority population can take care of minorities with great love and affinity.  In the instant case, Bobby Ahmed, secretary of Gazole Taxi Stand Sarbojanin Durgotsab, in a Muslim majority village, says, "If one practises religion truly, one can’t resort to violence or any form of disharmony.” The whole country should emulate Cooch Behar model, instead of the much hyped Gujarat Model. Isaac Gomes, Associate Editor.

Residents of Suktabari, a tiny village on the outskirts of Cooch Behar town, have been hosting a community Durga Puja for around 55 years now.

A homely affair, it doesn’t have the glamour of the major pujas in the district. But it stands out because of the feeling of amity. In Suktabari, Hindus are a minority and this puja is held with the help of hundreds of Muslim families of the area.

The village on the banks of the Torsha has a market where thousands visit every day. The puja is held at a temple in the market near the mosque and madrasa. In all, there are 400 shops at the market and only five are owned by Hindus.

“For decades now, Durga Puja has been held at the local temple. We join hands together to celebrate the occasion. In Suktabari, we have never seen any religious differences cropping up,” said Abul Hossain, president of the Suktabari Bazaar Byabsayee Samiti.

Traders like Harinath Saha and Manoj Saha, whose families have been staying at the village for generations, said they never felt “different.”

“We often hear people giving tall talks on amity but doing things that create differences among communities. They should visit Suktabari. We can organise the puja only because we get immense help from all the Muslims here,” said Harinath. Beauty, his wife, the secretary of the puja committee this year, echoed him.

“Muslims are the majority here and their enthusiasm for Durga Puja encourages us. We went to collect chanda and no one denied us,” she said.

The Durga Puja organised at a taxi stand in Malda town since 2007 tells a similar story.

Bobby Ahmed, secretary of the puja committee, said they felt the need to organise the puja as they found some lower caste Hindus were aloof from the festivities. “Their deprivation and humiliation prompted me to start this puja. Thankfully, some well-to-do residents of the locality stood by me,” he said.

Sankar Dutta, the puja committee president, said it was only because of Ahmed’s endeavour that they could host the puja at the taxi stand.

“Ahmed is very scrupulous about holding the rituals minutely. He has set an example for us,” said Dutta.

Ahmed, a trader, also bears the cost of a Kali Puja at his ancestral village in Englishbazar block near the India-Bangladesh border. “If one practises religion truly, one can’t resort to violence or any form of disharmony,” he said.