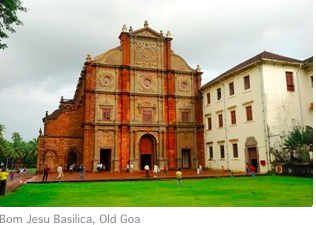 Old Goa (Matters India): Lightning struck the Basilica of Bom Jesus in Old Goa during a storm and damaged a pillar and tiles on the roof.

However, no one was hurt in the incident on Thursday evening.

The basilica holds the relics of Saint Francis Xavier.

Heavy rains lashed the former capital of Portuguese enclave. The lightning struck a pillar, which broke and a shower of stones came down from the facade of the 17th century heritage monument, The Times of India reported.

“A few stones fell down, but nobody was hurt,” Fr Savio Barreto, rector of the Basilica said. After the Archaeological Survey of India (ASI) officials were informed, they started carrying out an assessment of the damage.

The front door of the basilica was shut for tourists on Friday due to the precarious condition of the pillar above and entry was allowed from the northern side. “A few meters of the area below the damaged portion were also cordoned off,” a source said.

A small patch of tiles on the roof near the pinnacle was also damaged, but rain water did not leak into the church.

“Some tiles broke and a little plaster portion was damaged, but overall the damage is minor,” an ASI official said.

ASI will erect scaffolding from the facade to access the area near the pillar. “It will take a couple of days to erect the scaffolding and reset the dislocated stone above the pinnacle,” the ASI official said. The work has already started at the site.

The lightning conductor in the church was functioning, the ASI official said.

Lightning had also struck another heritage monument in the world heritage church complex, Se Cathedral on October 10, 2014, and damaged one of its gables and roof in some parts. The false ceiling of one of the halls near the priests’ residence had been partly damaged.