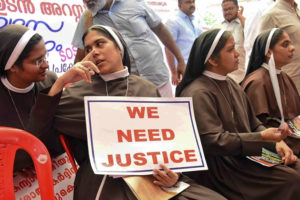 This has reference to the report captioned Priest impregnates nun: Catholic women deplore Church’s “double standard. The  Indian Catholic Church Hierarchy and their lackeys will NEVER imlement the Law: PREVENTION OF SEXUAL HARASSMENT OF WOMEN AT WORKPLACE as suggested by the Sisters in Solidarity. Their pleading to the Church Hierarchy is like banging one's head against the Great Wall of China.


Ministry of Women & Child Development has brought out a specific Manual captioned "Handbook on Sexual Harassment of Women at Workplace." The Church Hierarchy, including the Women's Commissions in each Parish/Diocese are very much in the know of this Manual but they (including Women Commision Members) prefer to keep it in cold storage. All these Commissions have no backbone of their own and are fully controlled by the Archbishop/ Bishop (of an Archdiocese/ Diocese) who are self-appointed de facto Chairpersons of each Commission. Therefore, putting in place Internal Complaints Committees (ICCs) as mandated by the law of the land and addressing issues of clergy sexual abuse, is nothing but a mirage. We have seen several such violations in Church-run Institutes / Schools & Colleges in the Archdiocese of Calcutta and also other dioceses, where there is a mockery of the Law on on Sexual Harassment of Women at Workplace and therefore  absence or cosmetic implementation of ICC where there are several women workers. In one Salesian School in Kolkata, when one complainant was called by the District Complaints Committee (DCC) at Lalbazar, to look into her complaint of Sexual Harassment by the priest-in-charge (Principal), the concerned police officer, in spite of being a lady, took up cudgels for the school (as the wards of most of the top police officers including judges study in Missionary institutions) for the school. When it was suggested that the DCC conduct a visit to the school (as there were several other teachers who were harassed including lurid text messages, but who did not dare to submit written complaint to the Women's Commission and the Police Authorities; they would have opened up during a private hearing), she cited Media Glare on such a reputed school. When requested to do so in plain clothes (instead of wearing uniform), then too she declined on the excuse of spoiling the reputation of such a well-reputed school. When she was told that a proper ICC does not exist in the school, she showed records (given by concerned Police Station of the School) that ICC did exist and showed the Committee members' names. When some of these teacher members were contacted over phone whether they were on the School ICC, the first thing they asked "What is ICC?" This speaks volumes for the school, which submitted false names of teachers (as ICC members) to the PS without the teachers/so-called Members knowing anything about. The Salesian school is in Central Calcutta. The principal's reputation as a predator precedes him and in spite of all his kala kartuts wherever he goes – whether North Bengal or Bandel – he takes along with him the same streaks of stalking female members of staff. He has terminated jobs of three teachers/female members of staff whom he had approached for sexual favour and who had lodged official complaints against him to the higher authorities in the School (Rector and Provincial), were first pressurized to withdraw their written complaints, then falsely show-caused, charge-sheeted and of late, terminated from service. The biggest irony is that one senior Priest from the Archbishop's House, conducted a one-man inquiry against one particular lady staff member (after she was falsely show-caused and charge-sheeted by the spineless School Managing Committee) at the behest of the notorious priest predator principal. Till date this priest has NOT given his enquiry report to the hapless staff member, who is undergoing tremendous mental and consequent physical trauma and has been issued Termination Notice. This priest had recently conducted another enquiry on sodomy in a school under Khidirpur Parish and did not give his report on the enquiry to one person who was called at the hearing at Archbishops' House, Kolkata. When he did not do so after repeated reminders, he was served a lawyer's letter.

The Archbishop of Calcutta is fully aware of this sordid state of affairs, including the sexual harassment complaints at the Salesian school in Central Calcutta. On public forums he always trumpets justice and truth but when it comes to a crunch, he conveniently takes an ostrich stance.  These sort of people in authority need to be hauled over burning coal ideally by women's groups.

JUSTICE is the last thing that one can expect from the Catholic Church in India which is increasingly being infested with parasite mafias like Mulakkals ( Kerala & Jalandhar), K.A. Williams (in Mysore) and Mondols and their ilks (in Kolkata). The only way out to curb this is Aam Dhulai by the Laity. Even the practical application of Jhadoo (Symbol of Aam Aadmi Party) will be a good medicine. Pleading to the Hierarchy in the style of Sisters in Solidarity will tantamount to dropping water on a duck's back.