Let’s end clericalism in the church! 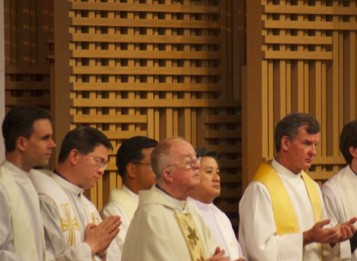 By Father Donald Cozzens, a writer in residence at John Carroll University, where he teaches in the Department of Theology and Religious Studies. His most recent books are Notes from the Underground: The Spiritual Journal of a Secular Priest (Orbis) and Master of Ceremonies (ACTA), a novel.

Clergy caught up in clericalism are incapable of seeing that it freezes their humanity—their ability to simply connect on a human level with the various sorts of God’s holy people.

(This article is taken from the  forward received from U.S. Catholic, http://www.uscatholic.org/clericalism.

It describes beautifully  an eye-sore  called “Clericalism” in contemporary Catholic Church which Pope Francis terms as “Peacocking” when applied to Bishops who find heavenly bliss in artificially put on glittering externals like colorful dress adorned with gold and silver. Similarly he would describe  the clergy who “struts about” with an assumed air of superiority telling onlookers “I am the Boss”. For Francis, inequality among the followers of Jesus is the biggest sin crying for retribution in the Church today while equality shold mean the attitude of St.Augustin who said: I am a Christian with you, while I am a bishop for you(to serve you). james kottoor, editor)

Finally, there appears an issue that our divided church can agree on. Catholics of all stripes—conservatives and liberals and in-betweens—are declaring a pox on clericalism. From Pope Francis to the back pew widow, from seminary rectors to lay ecclesial ministers, it’s agreed that clericalism is crippling the pastoral mission of the church. At the same time it is strengthening the secularists’ claim that Catholic clergy are nothing more than papal agents bent on enforcing rigid moral controls which smother our human instinct for pleasure and freedom. So let’s end clericalism in the church.

Yes, of course, let’s end clericalism. It’s just plain right to heed the growing consensus that clericalism must go. But something tells me, “not so fast.” This cancer crippling the Catholic world—from local communities to Vatican offices—is so deeply embedded in our past and present church fabric that a careful pre-surgery examination is called for. So, pull on your surgical gloves and join me in the pre-op room.

Here’s how I see it: Clericalism is an attitude found in many (but not all) clergy who have put their status as priests and bishops above their status as baptized disciples of Jesus Christ. In doing so, a sense of privilege and entitlement emerges in their individual and collective psyches. This, in turn, breeds a corps of ecclesiastical elites who think they’re not like other men.

Clergy caught up in this kind of purple-hewed seduction are incapable of seeing that it freezes their humanity—their ability to simply connect on a human level with the various sorts of God’s holy people. Of all the sour fruits of clericalism, this inability to connect with others might be the most damaging. When the ordained come across as somehow superior to their parishioners and people they encounter, the playing field is tilted. This kind of disconnect can be fatal to a priest’s efforts to build a sense of community in his parish.

It’s often difficult for parishioners to feel comfortable with a clerical priest. They simple don’t find “Father” approachable. The same can be said of bishops who are all too comfortable thinking of themselves as princes by divine selection. They connect neither with their priests nor with the people they’re meant to shepherd. And you won’t find the smell of the sheep on them.

Often that’s exactly what clergy caught up in clericalism want: They believe a certain distance from the non-ordained is fitting and right. Of course, priests need not be chummy with their parishioners, and the pastor-parishioner relationship requires maturity and prudence on the part of the ordained. Most pastors are all too aware of the smothering demands of some of their flock. Without question, they need to safeguard their privacy and find time when they are, so to speak, “off the clock.” But clericalism by its nature exaggerates this need. Without fail, it breeds artificiality and superficiality between pastors and parishioners. Though often unnamed, something real is missing.

Clerical priests and bishops (and yes, clerical deacons) come to see their power to confer sacraments, to preach, and to teach and administer as the bedrock of their identity. When this happens, they lose sight of the truth that the church’s power is ultimately the power of the Holy Spirit. Without words, they seem to say “We are clergy… and you’re not.”

Years ago, when I served as my diocese’s vicar for priests, I spoke with a highly placed lay diocesan official who related his fear that he was being co-opted by the system—that he was becoming “clerical.” I told him not to worry. The very fact that he sensed the danger was his deliverance. We agreed that a number of his lay colleagues apparently didn’t see the danger. These lay chancery workers thought of themselves as insiders. And in a real sense they were. And like many of their ordained colleagues, their first loyalty was now to the church as institution rather than to the gospel and to the faithful they served. So the cancer of clericalism, in its broadest sense, is not restricted to deacons, priests, and bishops.

Clerical culture, it should be clear, is the breeding ground for the disease of clericalism. The two, however, are distinct. We must understand this before any attempts to surgically excise the cancer of clericalism. Most professionals, skilled workers, and artisans develop a culture, a pattern of behavior and language and image that shape the identity of those who belong. Such cultures can foster a healthy esprit de corp. So clerical culture itself isn’t the culprit here. Priests regularly speak of the “brotherhood of the ordained.” They share a similar seminary training. They understand the joys and sorrows of parish ministry, the freedom and loneliness of celibacy, and the frightening responsibility of preaching God’s word. But a healthy clerical culture fosters a spirit of humility and gratitude in the hearts of deacons, priests, and bishops. It leads a priest to say to himself, “By the grace of God I’m a priest. But I’m first a baptized disciple in need of ministry myself, in need of mercy and the fellowship of lay men and women.” However, a clerical culture that exaggerates the role and scope of the ordained minister in the life of the church becomes fertile soil for the cancer of clericalism.

So, what can we do to end clericalism? The following steps should excise the disease, or at least put clericalism into remission:

But, some will argue, isn’t the critique of clericalism an attack on the priesthood? The logic behind this question goes something like this: It’s difficult to exaggerate the dignity and spiritual power of the priesthood. Think of how many, if not most, of the laity perceive the priest primarily in terms of offering Mass and forgiving sins. So great a vocation, it’s concluded, requires that a priest be someone “set apart.” And with being set apart comes responsibility and privilege. In other words, this line of thinking accepts as natural a certain clericalism in Catholic priests because they belong to a kind of noble spiritual class. And while nobility has its obligations, it also has its perks.

But Pope Francis has answered this way of thinking by saying the priest is not so much a man set apart as a servant-pastor placed in the center of the community. The pope believes a priest and bishop should have a missionary heart, the antithesis of a clerical heart. In “The Joy of the Gospel,” Francis writes that “a missionary heart never closes itself off, never retreats into its own security, never opts for rigidity and defensiveness. It realizes that it has to grow in its own understanding of the gospel and in discerning the paths of the Spirit, and so it always does what good it can, even if in the process, its shoes get soiled by the mud of the street.”

So, yes, let’s end clericalism and follow the example of our non-clerical pope. He keeps reminding his bishops, priests, and deacons that they are trail guides for a pilgrim people. They are ministers of mercy—with muddy shoes