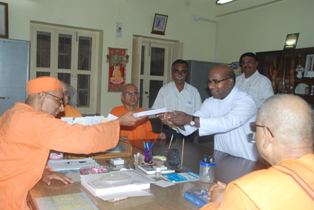 Belur (Story By: Shyamal Baran Roy– Matters India): Salesian general councilor for South Asia Fr. Maria Arokiam Kanaga has said that awareness must be created of the similarities among religions to bring communities closer to one another and end violence on religious grounds.

‘’There are more similarities than differences among religions. We need an awareness of these similarities so that we can understand one another better. This can bring the communities closer and can be a big help in ending violence on religious grounds,’’ Fr Kanaga said during an interaction with senior monks of the Ramakrisha Mission last week.

The interaction took place at the Belur Math, the order’s global headquarter, about 10 km northwest of Kolkata.

The Mission, founded by Swami Vivekananda on May 1, 1897, is named after his guru, the 19th century Hindu mystic Ramakrishna Paramahamsa who preached that God was one and people called Him by different names.

Fr. Kanaga is gaining recognition among admirers of Sri Ramakrishna and Swami Vivekananda owing to his doctoral thesis on the latter from the Salesian Pontifical University in Rome.

Kolkata-based Inkda Books has published the thesis as a book under the title Man Without Frontiers: The Ultimate Concern of Swami Vivekananda.

‘’Besides, I wrote the thesis from the point of view of an inter-religious understanding,” Dr Kanaga added.

Explaining that Man Without Frontiers was written mainly from an anthropological angle, Dr. Kanaga said the book has chapters on the epistemological and metaphysical basis of Vivekananda’s philosophy and the position of man in his religious, social and political philosophy, besides chapters on his moral and educational philosophy. The book also has chapters on Sri Ramakrishna and the life formation and character of Swami Vivekananda.

Recounting the days of his doctoral studies that date back to nearly a quarter of a century, Dr. Kanaga said a Catholic priest well versed in Indian philosophy helped him with the research methodology.

Stating that hardly any book on Swami Vivekananda in Italian was available in those days, Dr. Kanaga said he had to travel to other European countries like Belgium and the UK to look for relevant books for his thesis.

Swami Suhitananda said that the Gospel of Sri Ramakrishna, translated from the Bengali Ramakrishna Kathamrita and the Complete Works of Swami Vivekananda were now available in almost all international languages. A lay devotee has also taken the initiative to translate these works into Chinese, he said.

During the interaction, Dr. Kanaga explained the organizational structure of the Salesian society whose members work across five continents in 132 countries. The Salesians were present almost in every country of the world except main land China, he said.

Dr. Kanaga gave a copy of Man Without Frontiers each to Swamis Suhitananda, Suvirananda and Bodhsarananda.

They in turn gifted Dr. Kanaga with books and DVDs on Swami Vivekananda and the Ramakrishna Mission.

After the hour-long interaction, Dr. Kanaga was shown around the Math, including the temples dedicated to Sri Ramakrishna, Sri Sarada Devi, Swami Vivekananda and Swami Brahmananda. He also saw the room in which Swami Vivekananda lived.

‘’This has been a wonderful experience. I would like to come back again,’’ Dr. Kanaga said before leaving the Math.