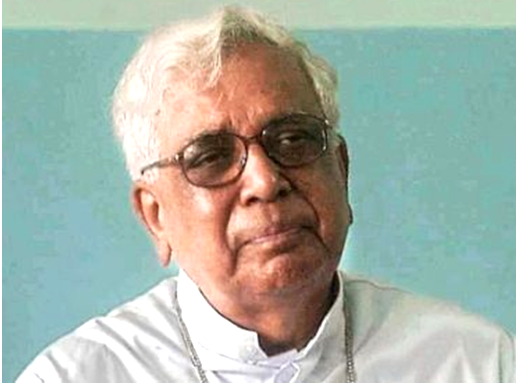 I was sorry to hear of the passing away of Archbishop Henry D'Souza of Kolkata.
I think the Church in India, which seems to be suffering from a patent lack of leadership today, is much the poorer for this wonderful Archbishop's passing.
I was privileged to have him as my Parish Priest during the years 1965-70, when I studied at IIT Kharagpur. From the time he consoled me, at the tender age of 17, when I was so demoralized about the tough "ragging" that IIT Kgp was known for, to the time in my senior years when he was instrumental in setting up an AICUF unit in IIT Kgp (and I became the first President), he came through as an intelligent and very understanding pastor. Most importantly, he showed true concern in his dealings with his flock; which I think helped the 25 or so Catholics in IIT Kgp at the time to stay faithful to the Church.
He was an intelligent and fearless priest. As Archbishop of Bhubaneswar and in some official capacity in the CBCI, in 1985, he spoke publicly on the matter of the Syro-Malabar Church's tactics, and especially on the now completely discredited Padiyara Report. I quote from his "General Remarks" of 6 March 1985:
"Noteworthy is the fact that the evaluation of the situation in Madras by a representative body of Oriental Catholics living there is made in the knowledge of the report of Archbishop A Padiyara, which it openly and explicitly contradicts. It corroborates our own reflections and assessment of the situation in general."
Note that second sentence. If that is not calling a spade a spade, I don't know what is. I wish the CBCI today could speak with half that honesty or fearlessness.

The Laity4Unity Coordinating Unity quoted him in our Petition (pp 95-96) of 24 May 2014 to the Holy Father on the Syro Malabar issue in Delhi. I'm glad Archbishop Henry was still alive to receive the great news of the "Instruction" dated 28 January 2016 from Rome's Congregation of Oriental Churches, which made it clear to the least intelligent that the SM church's actions in this matter had no justification or approval from Rome.
May his soul rest in peace.
Kurien Joseph
Laity4Unity, formerly known as Team Rite
"That they may all be one" [Jn 17:21]
Ajit Pudussery, Antony PJ, Catherine Mathai, DK Manavalan, Francis Kuruvilla
Joan Antony, Kurien Joseph, Rajan George, Sabu Thomas
Coordinating Group of the Syro Malabar Catholics of Delhi Catholic Archdiocese, India
C/o AFPRO 25/1A Institutional Area,
Pankha Road, D-Block Janakpuri, New Delhi 110058 India
Facebook: Rite Issue   Fax: +91-11-28520343